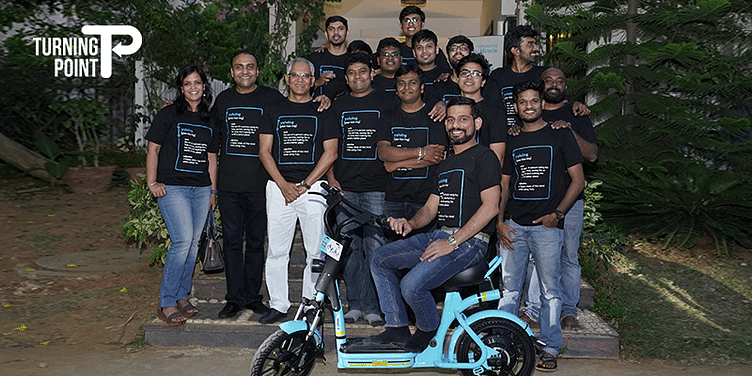 The Turning Point is a series of short articles that focuses on the moment when an entrepreneur hit upon their winning idea. Today, we look at Bengaluru-based electric mobility startup Yulu, which has taken on the burgeoning traffic challenge in the city.

While I struggle in the traffic between HSR Layout and Indiranagar twice every day, my eyes don’t miss the bright blue cycles and electronic scooters that smoothly careen on the footpaths, seemingly uncaring about traffic signals.

Bengaluru-based electric mobility startup Yulu, which is on a mission to end the city’s traffic menace, was born out of the founder’s personal pain point.

“The distance between my home and office was two-and-a-half kilometres. Initially, it used to take me seven minutes to cover it. Six years later, it started taking me 40 minutes,” says Amit Gupta, Co-founder of Yulu.

His idea was simple: ending commute woes with a dockless bicycle. Earlier this year, the startup launched Yulu Miracles, its EVs offering.

But what led the co-founders to the lightbulb moment?

All conversations in Bengaluru begin or end with its chock-a-block traffic. Amit, also the Co-founder of mobile marketing platform provider InMobi, wanted to help others resolve their traffic problems, and founded Yulu in 2017, along with friends RK Misra, Naveen Dachuri, and Hemant Gupta.

“After completing 11 years with InMobi, I wanted to do something that had a social impact,” Amit says.

As of today, Yulu has raised $7 million in funding; and the startup may soon raise more funds. The team is backed by many investors, including Blume Ventures, Binny Bansal, Naveen Tewari, and Girish Mathrubootham.

The startup is currently operational in Bengaluru, Pune, Mumbai, and Bhubaneswar. In Bengaluru itself, Yulu has over 850 Yulu zones (parking zones).

In May this year, Yulu also confirmed its partnership with Uber and started pilot operations in Bengaluru. The Uber app will redirect users to the registration page of Yulu. Uber will also help locate and unlock the bike.

Amit says, he saw problems existed in every sector – healthcare, education, water, and others.

“I finally chose commute because I was going through the problem myself,” he says.

[The Turning Point] How Razorpay founders made online payments simpler for startups, SMEs