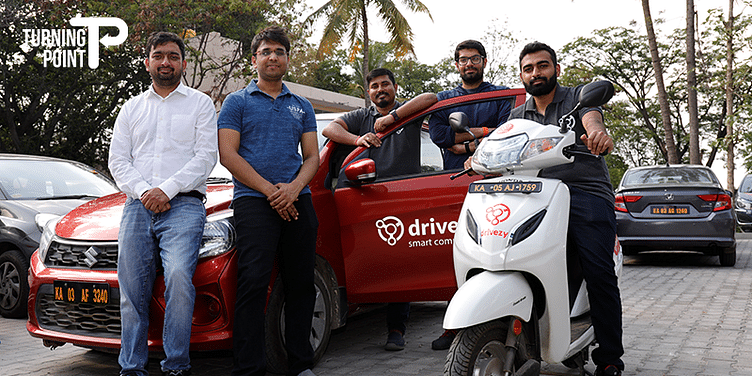 The Turning Point is a series of short articles that focuses on the moment when an entrepreneur hit upon their winning idea. Today, we take a look at Y-Combinator-backed Drivezy, which recently launched its US operations.

The concept of ridesharing did not find many takers in India until recently. The idea started picking up, courtesy cab aggregating platforms like Ola and Uber.

It was during this time that Ashwarya Pratap Singh’s new Ford Figo met with an accident.

“I barely used my car for more than an hour a day, and I spent a good part of my salary to maintain the vehicle. The accident made me realise that a lot of people my age might be facing the same conundrum,” Ashwarya says.

[The Turning Point] How the idea of making Indians sleep better led this duo to start Wakefit.c...

This was the lightbulb moment for Ashwarya, who was joined by his college friends Hemant Kumar Sah, Vasant Verma, and Amit Sahu to come up with a new concept: JustRide. The platform allowed people to rent cars to self-drive.

Initially, they began with leasing around 250 cars. Today, the platform, which has been re-branded as Drivezy, has expanded its services to include 4,000 cars and 16,000 two-wheelers.

The team also launched operations in San Francisco in the US in August this year. And now, the team intends to expand its services to 10 cities in the US with a fleet of 1,000 cars by next year.

“We are working closely with a major automotive firm to take our services to South America, and expect the services to be live within six to eight months,” Ashwarya says.

On an average, a car on the Drivezy platform today clocks 120-130 kilometers per day, while bikes clock 85-90 kilometres every day. They claim to have a 234 percent increase in listed asset base.

Early this month, Drivezy also entered into a strategic partnership with Gurugram-based hospitality chain OYO to park their vehicles at its properties.

“We have already stationed more than 1,200 bikes at Oyo hotels in Bengaluru and Hyderabad,” says Ashwarya.

A problem waiting to be solved

While Drivezy seems to be growing at a breakneck speed, Ashwarya believes the concept of sharing in the mobility space was a problem waiting to be solved. He says cities like Delhi, Bengaluru, Chennai, and Mumbai have a major problem of infrastructure, traffic, and parking.

“It is important to note that most parking areas available in major metro cities are not public. The huge volume of land space is inevitably taken up by vehicle owners who park their automobiles at their residence and offices, which is in addition to the spaces taken up while going for shopping and other purposes,” says Ashwarya.

He explains that they believe the increasing penetration of internet in India, coupled with the need for cost-effective and sustainable mobility will nudge millions of urban Indians towards vehicle sharing.

“We shall add another 70,000 bikes to our platform and take our services to 21 cities by next year. To consummate the high demand, we have also begun franchising our brand across India. Our franchise initiative has taken off a great start,” Ashwarya says.