How Ratan Tata-backed Niki.ai aims to generate $1B online business from Bharat 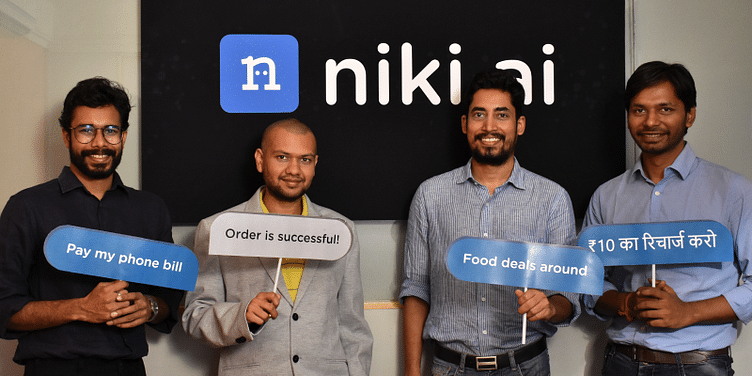 Founded in May 2015 by four IIT-Kharagpur graduates, vernacular conversational platform Niki.ai has set its sights on Bharat. The AI-powered startup's virtual agent is handholding the next billion users and unlocking the potential of internet commerce in Tier II and III India.

Much business potential lies in Bharat, where internet is only now seeing adoption. And Bengaluru-based startup Niki.ai wants to focus on this large pool with its artificial intelligence-powered voice conversational platform.

Backed by Ratan Tata, among other investors, over the last four years since its inception, Niki.ai has made inroads into how voice can become the medium to enable various kinds of transactions on the internet. The AI-based startup has set a target of enabling online transactions of over Rs 7,000 crore in the next two years from the current Rs 450 crore through various use cases for the retail consumer.

“We are building a virtual agent that can handhold the next billion users to unlock internet commerce. Ours is a conversational engine that can talk to you in your language,” says Sachin Jaiswal, Co-founder and CEO, Niki.ai, in a conversation with YourStory.

[App Fridays] Are machine-human interactions the future of online-commerce? Here is Niki.ai’s a...

He explains that Niki.ai is on a quest to build a conversational platform that understands the needs of population residing in Tier-II cities and beyond; as far as the internet is concerned, this pool is different from the typical resident of a metro city. “Metro residents fall into the DIY category but the others need a lot of assistance,” Sachin adds.

The Niki.ai Co-founder blames the "internet inhibition" among non-English-speaking internet users to leverage the internet on two factors: structural and cultural. Keyboards on smartphones are not designed for native languages, which acts as a deterrant. But, more importantly, users in Bharat do not completely trust the internet as a medium where they can do online transactions.

“Trust is a big challenge. This is the reason why these users generally prefer cash on delivery,” Sachin says.

The startup, which initially started with chatbots as the technology focus, soon realised that voice-based transactions were ideally suited to a country like India. Over the course of time, Niki.ai's technology platform has evolved to add a strong voice layer, where people from different languages can converse.

According to Sachin, around 50 percent of searches on YouTube are voice-based.

Niki.ai believes that services is the biggest opportunity to create voice-based use cases. “We are trying to solve the challenges faced by these users so as to empower them to use the internet.”

The Niki.ai app is available in four languages: English, Hindi, Tamil, and Bengali. It provides step-by-step instructions for any user to complete a transaction. “Eighty percent of our users use voice as they are not able to type anything,” Sachin says.

Making inroads into the market

These efforts have started to pay rich dividends for Niki.ai. In the last eight to nine months, it has increased the share of the wallet spend of users from Rs 2,400 to Rs 14,600, and has noticed increased app stickiness among users in Bharat.

“In the last eight months we have grown more than 500x in vernacular volumes with annualised sales of about Rs 450 crore,” Sachin says.

The entire technology platform of Niki.ai has been built in-house. Apart from the AI technology, it uses natural language processing and a software stack, which has enabled its platform to train for Indian languages.

Today, with a user base of 1.8 million (85 percent of them from smaller towns), Niki.ai is planning to expand into newer areas. According to Sachin, pilgrimage tours are a big catchment area, especially for their user base. The startup also plans to enable transactions in the education segment.

The team is planning to add seven more Indian languages to its platform as it expands into newer use cases. Niki.ai's aim now is to scale operations; as of now, there are around 5,000 suppliers on its platform.

On the competition front, global technology giants like Google, Apple, and Amazon have their own voice-based technology platforms. However, Sachin is unfazed as he believes that these companies are only providing the technology while Niki.ai is enabling and completing transactions.

“We believe that it is a $100 billion market opportunity and we would like to capture 25 percent of it,” Sachin says. “The voice-first experience is driving India.”