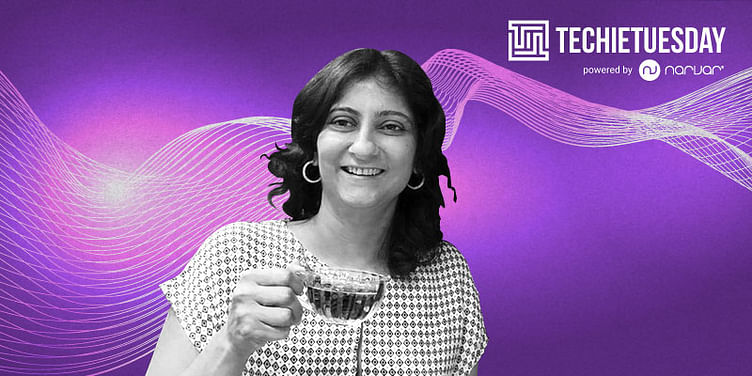 This week on Techie Tuesday, we feature Anu Acharya, Founder of Hyderabad-based MapMyGenone, a genomic startup. In a conversation with YourStory, she talks about her coding journey, how she built her startup, and why it's important to create something unique.

As the founder of one of the few Indian startups to work with genetics and genomic study, Anu Acharya’s entry into the field was serendipitous. It took her a while to get to where she is now, but the journey was interspersed with a lot of learning and plenty of exciting tech.

Today, MapMyGenome works on building the genetic profile and build of an individual, which helps understand their susceptibility to different diseases and their prevention. In a conversation with YourStory Anu retraces her journey as a woman engineer and the various phases of technology she has witnessed, from her IIT-Kharagpur days to MapMyGenome.

Born in Bikaner, Rajasthan, to a physics professor, Anu spent most of her life in Kharagpur. This is where her love for science and technology took root.

“I would hang out with my father in his physics lab and most of the people kept talking about science and technology. There was nothing else I could even think of. We didn’t have TVs or mobile phones; we only read and our birthday gifts were either books or a science kit,” Anu recalls.

When it ws time for higher education, Anu chose IIT0Kharagpur in 1990. “Whatever coding I did or learnt was at IIT. The programs we learnt then were C and Pascal,” Anu says. But her first tryst with coding had happened way before, in high school.

“I do remember writing and getting stuck, working around it, and then moving ahead. But the newness of the whole experience was so thrilling and exciting. And the feeling of writing some code and watching something happen cannot be explained. Over the years, things have become easier. When my brother was coding in the 80s they used punch cards to write code. And he would write so much code and bring it home. I would try making sense of it even then.”

After IIT, Anu wanted to do her master’s in the US, but her visa did not come through. So she had a brief stint, less than a month, at Tata Unisys and managed to get "some experience on mainframe systems" in the short period.

In 1995, Anu left for the US with the initial plan of getting a master’s and a PhD. But she soon shifted course to Information Systems, a course that combined both computer science and management studies.

"When I was a child I wanted to be a physicist. But by time I was in my second year in IIT, information systems seemed more exciting - it was a mix of business acumen and computer science,” says Anu.

The course gave her the opportunity to code while learning how to run a business. Soon after her master’s, Anu joined Mantis Information, a startup in Chicago in 1997. At the telephony product company, she worked with a team of engineers to build software that allowed telecom companies to port consumers from one telecom operator to another. Anu even worked on sales and product implementation at Cincinnati Bell.

A year later, she joined SEI Information, a tech consulting firm. “We built an Entrepower platform that would patch entrepreneurs to each other. Somewhat like Facebook,” Anu says.

Those were exciting times for the young engineer who spent days and nights brainstorming with the team, coming up with code, building it, and even getting the product up and running. Unfortunately, the founder was unable to raise the next round of funding.

Entering the world of genetics

By early 2000 Anu also had her baby and was planning to move back to India and start something on her own. She came up with a slew of ideas: a “bandwidth bazaar” and “voice gram” – a combination of voice and telephone platform. “These things have happened but we didn’t go ahead with them,” Anu says.

In November 2000, along with Sujatha Pami, her relative who had a background in medicine and genomics, and Subhash Ligareddy, Anu started Ocimum. The company was registered in the US, but operated out of Hyderabad.

During this time, the human genome was getting sequenced. That was the motivation they needed.

“When we started off, we were a software company and built bioinfomatics, a sequence analytics software called Gencheck. Soon, we built devices like Biotracker, Geoviz, which again was in genomics and software, and different shrink wrap products for labs,” Anu says.

In 2005, Ocimum reached a turning point when it acquired one of the companies it was planning to sell software to. Soon after, Ocimum got its first lab. The startup also acquired several companies working on genomes.

“When we started Ocimum in Hyderabad, we didn’t find too many people with experience in programming and life sciences. We went down the unusual path by tying up with and creating certificate courses for the University of Michigan and University of Alabama,” says Anu.

She recollects incidents that helped shaped Ocimum. She says, “I was selling our product and promised delivery earlier than the product could be finished. This meant that every person had to code nights for a month!”

Another time, Ocimum was competing with Accenture and they didn’t have a product ready. “But we wanted to get access to the client. We promised a third of time and cost and pulled all-nighters. We built a product called Oppgene, which many companies use even today. It optimises the genes you are looking at,” says Anu.

A tryst with Indian genetics

Ocimum became one of the largest service providers in the space in the world. However, most of the data collected was of Caucasians.

“Genetics has always been a fascinating subject. However, India doesn’t have the same access as the West. If you look at the amount of data available on the Indian genome, it is limited. Even if one out of every six individuals is Indian, we are not there yet in understanding our own genetic makeup,” she says.

Thus, in 2013, Anu started MapMyGenome. It began with different markers, writing algorithms for risk prediction for traits, conditions, genetic components, and prediction of the genome.

She says they had started working on building the algorithms in 2011. “The algorithms work on machine learning. If you look at the average human genome, pick the sequence data, or different parts of the sequence and markers, run it against the software with existing data points, weigh accordingly, and run a pattern, your algorithm improves,” explains Anu.

The bigger challenge was getting enough research material for Indian data sets. “We could do the tests ourselves but it was expensive. However, we worked on finding the right articles. Today, Genomepatri detects over 100 conditions; we had started with 30 to 40,” Anu says.

[Techie Tuesday] Swapan Rajdev of Haptik, one of the largest conversational AI platforms, has o...

MapMyGenome’s Genomepatri maps and traces the genomic build of an individual, based on which it can determine the likelihood of different conditions and diseases. The company has tied up with several laboratories and hospitals for this.

Anu, who has seen the rise of technology in everyday use cases, says that while it is easy for anyone to pick up coding, it is hard to stand apart and create a niche for oneself and one’s company.

“Many large companies solve problems and give away solutions for free. So, it is important to build something unique and different,” she says.

This is why she believes that one has to keep oneself constantly updated and abreast with trends in the industry.

“A lot has changed in the last 20 years. If people get stuck with systems you become outdated. Renew your skills and see where your passion lies. Find the right problem you want to find a solution for,” Anu advocates.