How curiosity and observation lead to innovation: Rob Walker, author, ‘The Art of Noticing’ 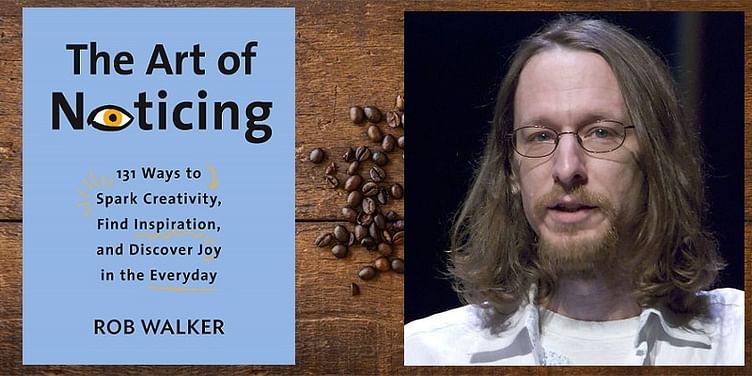 Discovery is everywhere, and noticing what others miss is a key step to successful and original innovation, explains bestselling author Rob Walker.

Rob Walker is the author of The Art of Noticing: 131 Ways to Spark Creativity, Find Inspiration, and Discover Joy in the Everyday (see my book review here). He is a faculty of the Products of Design MFA programme at the School of Visual Arts in New York, and a columnist for The Atlantic, New Yorker, and Bloomberg Businessweek.

The 131 exercises in the book are divided into categories of activity like looking, sensing, travel, connections, and being alone. Being observant has some built-in tradeoffs and balances – it can mean escaping a moment or being in it; it can mean blocking all distractions or choosing one of them. These aspects of observation are systematically and humorously brought out in the book.

In a chat with YourStory, Rob talks about the importance of curiosity, resources on creativity, and the balance with satisfaction.

YourStory: In the time since your book was published, what are some notable new observation habits you have come across?

Rob Walker: One cool habit came from a friend who teaches at the Savannah College of Art and Design. He has his students go out and look at specific objects for half an hour, then come back to the studio and draw them from memory. A great test of observational skill! (Since it was too late for the book, I wrote about it in my newsletter.)

RW: Yes, we had many conversations about how many exercises there should be — 100, 101, more, fewer? My editor and I decided that I would write as many as I could, and that she would sign off on it.

We thought it would actually be more interesting to have a very specific number, rather than a round number. The only criteria I introduced is that I thought it would be better if it were a prime number. A prime number just feels more precise. That said, I wrote way more than 131, and I occasionally share the extras in the newsletter.

YS: Among the long list of books you cite, which would you say are the top three or five books for those who want to become more creative?

RW: I would say maybe Austin Kleon’s Steal Like An Artist, John Berger’s Ways of Seeing, Lynda Barry’s The Way It Is, and Lewis Hyde’s Trickster Makes This World are all great choices.

But I really really really hate to make “Top Five” lists because reader needs/wants differ, and also because all a question like this really achieves is me alienating all my fellow writers who I did not name. There are so many great books on this subject; it really depends on what the reader is pursuing.

YS: What are some outstanding conferences or festivals you have been to where the art of noticing is celebrated or widely discussed?

RW: I have been hired to speak at several events, but they are mostly private corporate events. I recently appeared at the Texas Book Festival and we sold out of books there, so that was great. I would love to participate in more conferences and festivals that are public facing.

RW: I’ve gotten so much nice feedback. One great surprise has been the response to the Art of Noticing newsletter I started a few months before the book came out. It has similar content, but it has taken on a life of its own!

YS: What is your current field of research in creativity?

RW: I continue to pursue ideas around attention and noticing, but I’m also starting to think about ambition and satisfaction — when it’s okay to be happy with what you’ve achieved, instead of always feeling like there’s more you could have done.

YS: Getting new ideas is one thing, but unlearning outdated ideas is another altogether. How can these two be reconciled?

RW: Ideally, they go hand in hand. But it’s easier to start with the new idea. For example, a lot of people talk about how important it is to put away your phone, disconnect, etc. — so we need to “unlearn” our attachment to technology.

But then what? That’s why I wrote the book - to encourage ways of engaging with the real world. If you do that first, it makes it much easier to put the phone down. Because you are already learning and noticing and experiencing so much!

YS: How should creative people strike that delicate balance between ‘Stick to your vision’ and ‘Adapt to a changed world’?

RW: I think that’s a constant process — we should always be asking this question, and adjusting the answer as appropriate. The mistake is to think you can answer this once and for all and stop thinking about it. It’s a balance that will always be changing.

YS: Who are some of the influential changemakers and leaders whom you would regard as good ‘noticers’?

RW: The book is full of examples, but I’d like to mention artist Nina Katchadourian. Among other things, she created a tour of New York’s Museum of Modern Art based on a consideration of dust. She’s an inspiration.

YS: Is there such a thing as the ‘ideal age’ for being an observant person, or can the creative bug strike you at any time?

RW: Children are naturally better at it, because they are genuinely experiencing so much for the first time. We can all learn from that — don’t take the world for granted! Discovery is everywhere.

YS: What’s it like to be an author and consultant in this space? Is your message getting wide reception and traction?

RW: I think a lot of people are tuned into the basic issue of figuring out how to respond to the attention economy. The thing I get the best response to is that I’m not just focused on what you shouldn’t do and telling you to unplug — I’m offering easy exercises that you can proactively add to your day.

YS: What is your parting message to startups and aspiring innovators in our audience?

RW: It’s easy to get caught up in what’s “trending,” what everyone else is talking about, etc. And there are reasons to be on top of that. But the mistake people often make is to think “Oh this thing that I’m noticing, nobody is talking about it, I guess it must not be important”.

Actually, I’d say the thing you noticed that no one else has picked up on yet — whether it’s something great that should be celebrated, or a problem that should be solved, or something that needs to be explained — that’s the important stuff! It’s noticing what other people missed that is the beginning of creativity and innovation. It is where original ideas come from.

'Being fully present with a curious mind is under-rated': Bejul Somaia on spotting gems by ignoring stereotypes