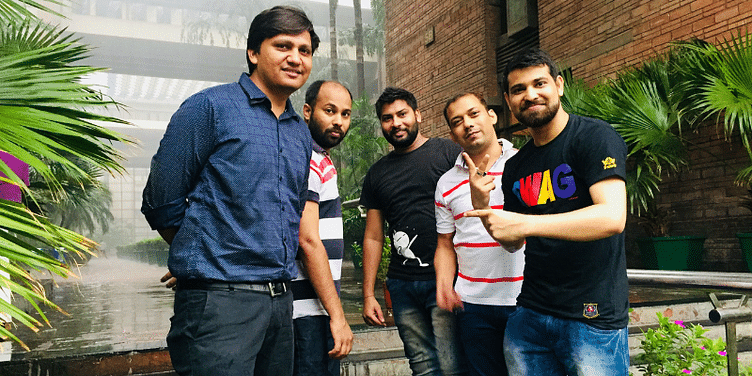 Delhi startup Nojoto has developed a mobile application leveraging AI, where individuals can record their stories via audio and visuals and share them.

All of us have experienced the beauty and wonder associated with narrating as well as sharing stories. Whether it is an account of strength, sacrifice, or sentiment, tales have the potential to capture people’s attention.

Delhi-based startup Nojoto is attempting to tap into just that through its digital short storytelling platform. Founded in 2017 by a group of five highly enthusiastic individuals -  Kamal Kumar, Satyaprem Upadhyay, Amit, Himanshu Upadhyay, and Mukesh Poonia, the startup offers a mobile application solely based on self-expression, where individuals can record and share their stories.

The aspect that distinguishes Nojoto’s platform from the others is that it focusses on expressions only via audio and visuals. For instance, it allows individuals to put up stories, poems, and rap songs in 12 Indian languages, along with an option to add background music.

In a span of just two years, the startup has become one of the largest storytelling platforms with 3.5 lakh storytellers sharing over 5 lakh stories every month, which is consumed over 50 crore times by one million active consumers in a month.

In fact, Nojoto also has a strong offline connect. The startup has managed to drive its users to hold 350 storytelling events across 100 cities and colleges in India, involving 15,000 storytellers and 50,000 viewers, each of whom paid anywhere between Rs 100 and Rs 500.

“The whole premise behind starting this venture was to enable people to express themselves in a language of their choice and democratise storytelling. The word ‘Nojoto’ is derived from the word “Mojo”, which means passion. Going by the core idea of providing a platform for individuals to share their passion," Nojoto’s Co-founder and CEO Satyaprem Upadhyay says

How the startup took off

Satyaprem, one of the five co-founders of Nojoto, was working as the Chief of Staff at ecommerce firm DEN Snapdeal when he decided to call it quits and start up.

Being an Army kid and a theatre artist, Satyaprem travelled across the country and met a lot of people belonging to different geographies and sects. During the course, Satyaprem realised that though many of them possessed some amazing talents and had encountered many enriching experiences, they had no platform to dole out their stories. That’s when he decided to initially bootstrap, establish Nojoto and set up a digital platform.

“Despite the existence of social media platforms like YouTube, Facebook, and Instagram, I observed that there was still a need for an online forum where people can express themselves in their own language without any hesitation. In order to test the waters and tap into the masses’ perception, I organised several offline events initially and observed massive success,” Satyaprem says.

When he was part of DEN Snapdeal, he met Kamal when he was looking for a CTO.

“I had expressed an interest in launching a business back then. Hence, when I heard about Nojoto, I joined in and brought in Amit and Mukesh. Later, Himanshu, a radio jockey and digital marketer too got affiliated with Nojoto. And today, we are a team of 22 people,” says Kamal Kumar, Co-founder and CTO, Nojoto.

Nojoto’s business model runs on creator subscription and advertising. The venture raised the first round of funding, amounting to $50,000 from Maneesh Goel, the CFO of PayU, and a musician named Hemant. The second one summing up to $560,000 was sourced from Rishab Malik from Droom, Kabir Kochhar from WPP along with LetsVentue and Chennai Angels. The startup is presently in active discussions with investors from India and China for their Series A round.

Nojoto’s mobile application is aimed at creating meaningful and entertaining content in the form of stories in different Indian languages. The platform allows people to put up stories both in the form of voice and video. However, the time cap for the content lies between one and five minutes.

Today, there are not many platforms that focus on content creation in regional languages. And, Nojoto is working towards giving both the common man and influencers alike, a chance to express their emotions and share their life stories.

Shweta Singh, a biotech engineer, made use of this chance when she began performing poetry on Nojoto last year, and it turned out to be a defining moment in her life. She earned a lot of fame overnight for her eloquence, and also got offers from various production houses across the country. Today, she is writing stories for films, web series, and songs.

“At its core, Nojoto is a marriage between content and technology. Our app is presently available on Android, using LAMP, an open-source web development platform that uses Linux as the operating system. We also used machine learning and artificial intelligence to solve language and content personalisation,” Satyaprem says.

The co-founders of Nojoto have some big plans for the future. They are working towards reaching 15 million monthly active users (MAUs) in the next few years.

“We are aiming to expand our user base more in the coming days. Also, the team is constantly striving to solve the issue of low network coverage and the dearth of smartphone ownership especially in Tier II and III cities as well as rural areas. Once we obtain a Series A funding, we would like to invest a lot more in data science and artificial intelligence,” Kamal signs off.