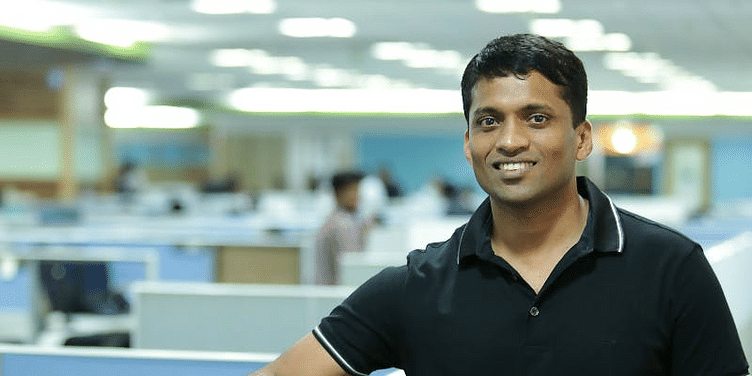 Online education startup BYJU'S says its net revenue climbed from Rs 490 crore in FY18 to Rs 1,341 crore, with a net profit of Rs 20 crore, in FY19. The edtech company now aims to penetrate deeper into India by launching programmes in vernacular languages.

Online education startup BYJU'S has reduced its consolidated loss to Rs 8.82 crore, while registering a manifold increase in revenue from operations, according to regulatory documents.

The edtech unicorn's total income increased to Rs 1,366.98 crore in FY19 from Rs 500.21 crore in the previous financial year, the document showed. On a standalone basis, the company registered a profit of Rs 20.16 crore in FY19, compared to a loss of Rs 28.65 crore in previous fiscal.

The standalone revenue from operations increased to Rs 1,281.08 crore in FY19 from Rs 460.87 crore in the preceding fiscal.

The company said deeper penetration across India and significant growth in the number of paid subscribers were the primary drivers of growth.

In January this year, BYJU'S also forayed into the US with the acquisition of Osmo, the US-based learning platform.

"We have exceeded the financial goals we set at the beginning of the year. Expanding our base across smaller towns and cities and introducing new products have been pivotal to our growth," BYJU'S Chief Operating Officer Mrinal Mohit said.

He added that the company's performance was a reflection of the increasing acceptance and adoption of digital learning across India. "With 60 percent of our students based outside the metros, the aspiration and need for quality learning has never been higher," he said.

Bigger plans for the future

Mrinal said the company was on track to double its revenue to Rs 3,000 crore in the current financial year. "We will also be launching BYJU'S Online Tutoring, which will further accelerate growth and profitability in the coming year," he said.

BYJU's is also planning to penetrate deeper into India by launching programmes in vernacular languages.

"We have always focused on sustainable growth and our efforts will continue to be on creating learning experiences that help students become better learners. Being the world's most valuable edtech company today, we strongly believe that we have the capability to create a global product that can revolutionise learning for students across the world," Mrinal said.

Currently, its learning programmes are available in English and Hindi. It has over 40 million registered users and 2.8 million paid subscribers.