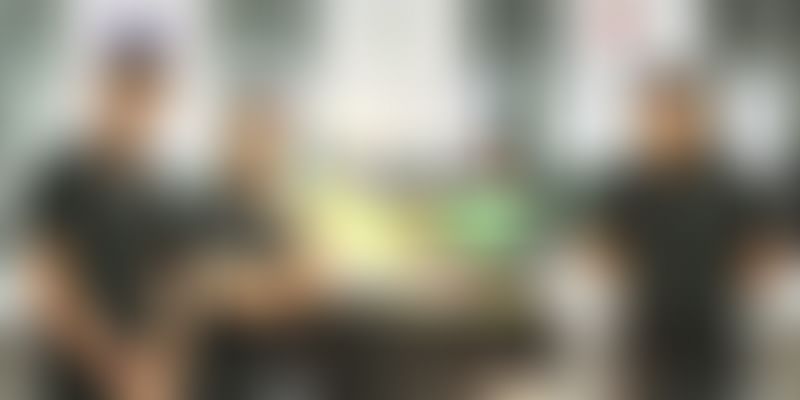 Delhi-based startup Agro2o is marrying hydroponics (soilless farming) and automation to bring a cool new gadget and a whole lot of good vibes to millennial households.

Yash Vyas was working in a retail store in Dubai when he stumbled upon the concept of hydroponics in a newspaper. Hydroponics (also known as ‘soilless farming’) is a practice where plants are grown indoors using mineral nutrient solutions in water solvents.

It fascinated Yash instantly and also made him realise that Dubai’s harsh desert climate had made it difficult to grow farms.

“There was inefficiency of land and water, and almost no greenery either at home or outside. That formed my belief that hydroponics could be a fix. It is a clean and sustainable solution, unlike current farming techniques,” Yash tells YourStory.

The Delhi-based startup operates at the intersection of agritech and IoT.

Agro2o has developed a proprietary smart garden using a fully automated indoor hydroponics system. The plug-and-play solution allows anyone to grow fresh herbs, veggies, medicinal plants, and even flowers inside their homes. Because it is an IoT-enabled product, it requires little human attention on a daily basis.

“We call it automated hydroponics. Depending on the plant type, the system can intelligently judge and provide the level of light, water, and nutrients required, and create an ideal growing condition for the plant. There are microcontrollers fitted into it. All you have to do is insert a nutrient cartridge depending on the plant you want to grow.”

The smart garden is also enabled with a touchscreen and WiFi connectivity. It sends out alerts to users whenever the water has to be topped up.

In future, the system could even come with Alexa integrations, Yash shares.

Intersection of hydroponics and automation

He explains that this unique marriage between hydroponics and automation is a result of the startup’s two years of extensive R&D in plant science, for which it collaborated with the Delhi University’s Department of Plant Molecular Biology.

“We also acquired expertise in automation and AI to be able to perfect the technology and apply for design patents,” Yash reveals.

While the product is yet to see a commercial launch (planned for early 2020), Agro2o showcased its technology at the Startup Expo held in September. “It attracted a lot of interest from investors and general buyers,” claims the Founder.

It has also been incubated by Electropreneur Park, an initiative of the Ministry of Electronics and Information Technology (MeitY). The currently bootstrapped startup might even look to raise a seed round of Rs 1.5 crore to Rs 2 crore in 2020.

Agro2o’s current device allows you to grow 10-12 crops at a time. These are categorised into Herbs, Greens, Veggies, and Ornamentals.  “Categories of crops cannot be mixed because the nutrients and conditions required for each are different,” Yash says.

He adds that a 24-crop device is in the pipeline. The plan is to have three products for varying crop capacities in the price range of Rs 8,000 to Rs 18,000. “It is like any other consumer durable device that can last you for 4-5 years,” Yash adds.

As could be expected, the demand for indoor hydroponics systems is much higher in the Gulf countries than in India. The founder attributes this to severe climatic conditions and higher disposable incomes in these regions.

Hence, to tap into this growing demand, Agro2o will launch in the Middle East along with its rollout in Delhi, Mumbai, Bengaluru, and Chennai.

By 2025, the startup plans to sell two lakh units in India, and clock revenue of Rs 300 crore - Rs 350 crore. In the GCC countries, meanwhile, it hopes to sell about five lakh units in five years.

Yash observes, “I see two user profiles for our products. One is the value-conscious customer who wants something positive in their space. The second is urban millennials who like cool gadgets and also love cooking with fresh veggies and herbs.”

While smart homes is Agro2o’s immediate focus, the startup also has ambitions to venture into the smart farms segment.

Tech a facilitator for soilless agriculture

Hydroponics is a nascent sector in India.

But globally, the market is expected to be worth $12.1 billion by 2025, with Asia Pacific being the growth driver, according to Transparency Market Research.

Agro2o claims to be the first in Asia to launch a smart hydroponics product. “So, building awareness is both an opportunity and a challenge,” says the founder.

“Our nearest [undisclosed] competitor in the West is valued at only $120 million. This is a relatively new sector, but there is a large potential to be realised,” he explains.

Does Agro2o want to be seen as an agritech or an IoT company?

A bit of both perhaps.  Or, as Yash puts it: an innovation company in the smart hydroponics sector.

“Tech is just a facilitator to make soilless farming more accessible,” he signs off.