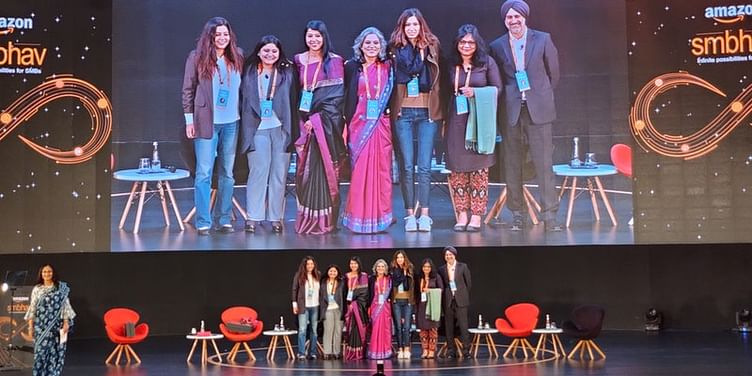 Women are neither from Venus or anywhere else, but simply from Earth who needs a gender-neutral environment to grow in the business landscape.

The notion reverberated across the hall on the second day of the Amazon Smbhav event, a summit for small, micro and medium business (SMBs), when a thought-provoking panel discussion brought up a deep conversation on celebrating diversity and women entrepreneurs.

Speaking about the barriers for women in the entrepreneurship journey, Amazon’s Shalini pointed out three major issues – social, financial, and personal.

“Technology is blind and you have the ability to solve the first barrier, which is social. It does not matter for the technology if you are a man or a woman,” Shalini said.

“However, we are beginning to see changes in the narrative,” she added.

Echoing the same, Anuradha Prasad, Additional Secretary, Ministry of Labour and Employment, Government of India, said that the percentage of women employed in the country, and those looking for employment actively is about 23.4 percent as compared to 61 percent in China, 54 percent in the US, and 34 percent in Sri Lanka.

She asserted that we need more women to be part of the workforce to see more women-led companies in India. “A lot has been done but, it is still a social ecosystem,” she added.

At present, tech giants like Amazon and Google are taking steps to change this. For instance, Amazon has a programme called Saheli, which is a dedicated storefront on the website, to help display and sell products made by women listed across different categories on the platform.

Similarly, Tata Trusts and Google have a digital literacy programme based on ‘train the trainer’ model called Internet Saathi. Rural women are trained on using the internet, and are made equipped with data-enabled devices. These women are known as Internet Saathis, and work as trainers to help other women in the village to get started on their internet journey and benefit from it.

Speaking on how to encourage more women to join the business world, ﻿LBB﻿’s Founder, Suchita Salwan said that we need to have more female figures and iconic female leaderships, and not just a handful that we have at present.

Agreeing to the same, Kanwal Singh, Founder and Managing Partner, Fireside Ventures, said that not enough has been done to celebrate women entrepreneurs, and that needs to happen more.

Upon asked by Shradha if investors are shying away from investing in women-led startups, the only man on the panel, Kanwal Singh said that about 45 percent of Fireside companies have at least one woman co-founder. Some of the Fireside’s portfolio companies are ﻿Pipabella﻿, ﻿Vahdam Teas﻿, ﻿Mamaearth﻿, ﻿boAt Lifestyle﻿, among others.

The real difference comes only when we begin the change at home, Shradha said. She concluded the panel by asking a room full of business leaders and SMBs to think or ask themselves, how they can enable women back at home.

“Men have to feel secure about their wives and daughters to encourage more women entrepreneurs. Great women entrepreneurs are formed when we stop being a hypocrite and feel from the heart that both women and men are equal,” Shradha concluded.