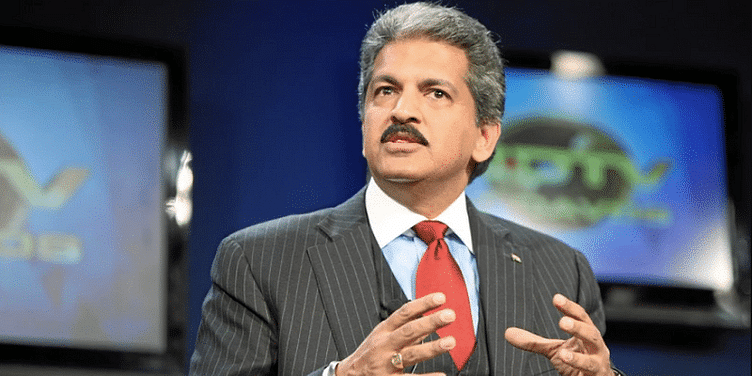 The Mahindra Group Chairman is one of the rare business leaders in India who doesn't shy away from expression on social media.

Anand Mahindra has never been one to hold back expression on social media. The Mahindra Group Chairman was not only one of the first Indian corporate leaders to join Twitter (back in 2009), but continues to be one of its most active users.

Mahindra's keen observations and opinions on a range of issues from business, industry, and technology to cricket, cinema, and daily life keep his 7.4 million followers thoroughly engaged on the platform.

Last week, a viral video caught Mahindra's attention. A Disney-themed proposal made by Hollywood filmmaker Lee Loechler to his girlfriend, in the presence of a live audience consisting of the couple's friends, has been doing the rounds on the Internet.

BBC has called it "the most elaborate marriage proposal ever". It left Mahindra impressed, but also gave him an "inferiority complex".

"This clip has been going viral globally. This gent apparently hack-animated a disney [sic] movie to propose to his childhood sweetheart... And I thought I had done a good job 40 yrs [sic] ago with my proposal. Now I have an inferiority complex!" he tweeted.

This clip has been going viral globally. This gent apparently hack-animated a disney movie to propose to his childhood sweeetheart.. And I thought I had done a good job 40 yrs ago with my proposal. Now I have an inferiority complex! pic.twitter.com/jbTAYBg3nh

Mahindra's tweet has been 'liked' more than 22,000 times, and the video has garnered over 190,400 views already. "We would love to see your proposal videos," wrote one user. "It just gave me inferiority complex for life," wrote another.

The proposal video raked in more than five million views on YouTube.

Mahindra habitually shares viral videos and stories that reach him through what he calls the "WhatsApp Wonderbox". Last week, he tweeted a funny news item and set off much laughter and amusement among Twitterati.

From my #whatsappwonderbox A hilarious story by itself. But isn’t it also about all of us? We too spend much of our time as part of ‘search’ parties looking, supposedly, for someone else without realising that we really should be finding ourselves! pic.twitter.com/mlRc04kMYO

Mahindra expresses his gratitude for people who put interesting stuff - videos, text or cartoons - in his #WhatsAppWonderbox.

Thank you to the person who put this in my #whatsappwonderbox. I’m always grateful when I can start my weekend with a belly laugh... pic.twitter.com/hOukMxumlV

He is also a die-hard fan of Indian cricket and never shies away from sharing his superstitions that are tied to his team's fortunes.

Last night after India won a bilateral series against Australia, Mahindra tweeted this:

Was wondering what to do with this video until we won #INDvAUS in style. When Team India got into their rhythm and burst into song, the Aussies ran for cover... 😊💪🏼 pic.twitter.com/yPyIg4k6w3

Considering most Indian CEOs are "relatively inaccessible to consumers on social media compared to their European and US counterparts" as obtained by a study conducted by ECCO International, Anand Mahindra is more than a breath of fresh air!