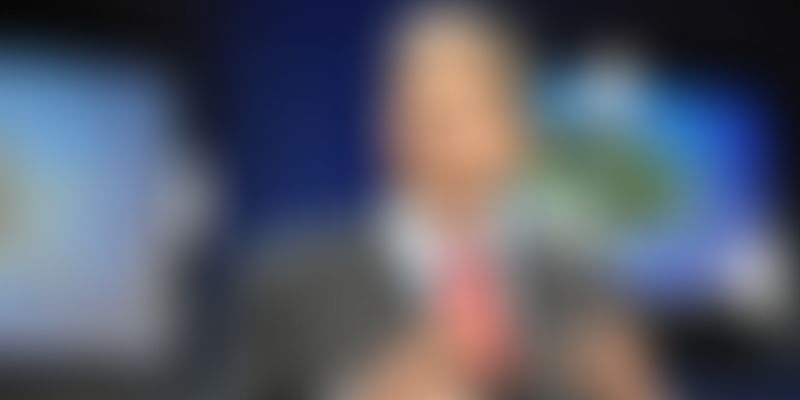 The country’s fifth-largest IT firm is nurturing startups in-house, incubating external ventures, partnering with startup ecosystems worldwide, and hoping to create some serious “deep tech” startups out of India.

Tech Mahindra was one of the 10 Indian companies to make it to Forbes Asia’s prestigious ‘Fab 50’ list in 2015. It ranked alongside industry peers TCS and HCL.

TCS, of course, is one of India’s most valuable companies now, and is racing to the $100 billion market cap figure. Tech Mahindra, meanwhile, is valued at $6.7 billion or thereabouts, according to Forbes. It is one of the most important business divisions of the $19 billion Mahindra Group.

It was an important deal, one of the biggest Indian IT had witnessed until then. Stocks surged post the merger. Tech Mahindra went on record to say, “This merger will help us compete in the category of the big boys.”

In the last 18 months or so, Tech Mahindra — like all other “big boys” of IT — has gradually moved away from traditional software services to what is now being touted as “emerging tech”. These include blockchain, machine learning, artificial intelligence, IoT, robotics, cyber security, and so on.

It is the need of the hour and the company is acutely aware of that. Hence, startups.

Tech Mahindra makes no bones about the fact that it “can’t experiment a 1,000 times”. Thus, it chooses to work with those who can.

“We have great knowledge about business practices and the large scale transformation that is required. We have the manpower too. But we do not have the ability to experiment a 1,000 times which startups can. They are an antithesis to a large corporation. That is why we need to look into the startup ecosystem. It increases our reach into innovation and disruption.”

Jagdish has been entrusted with driving growth and innovation at Tech Mahindra, and he has a plan.

He explains: “We have a funnel which looks at all startups. We look at their culture, analyse whether it fits ours or not. We want stable ideas and see if they go with our solutions portfolio or not, and whether we can build use cases for our existing customers. Only then does a partnership go through.”

The Mahindra Group has traditionally underscored the importance of tapping into the local startup ecosystem. Group Chairman Anand Mahindra has been a cheerleader in this regard and stated that “there’s an explosion in entrepreneurial energies in this country.”

Recently when Apple Co-founder Steve Wozniak accused Indians of “lacking creativity”, Mahindra reacted sharply. He tweeted: “Nothing like a sweeping stereotype to get our juices flowing and prove it wrong. Thanks @stevewoz come back soon. We’ll make you sing a different tune.”

He has even called for proposals from domestic startups to launch a homegrown social networking venture in the aftermath of the Facebook-Cambridge Analytica data scandal.

“Look at the thinking power of these guys [local entrepreneurs]. Our primary reason to engage with the startup ecosystem was to expand our network of ideas.”

In December 2017, Tech Mahindra announced that it would rope in 20-30 startups under its incubator programme, TechM Nxt. These would be chosen from a pool of 300-400 startups from India, Israel, UK, and Silicon Valley.

But “local” startups could well be in focus. “The aim is to get disruptive technologies to impact existing business processes,” Mitra notes.

Most of these startups are in the sectors of AI, robotics, IoT, fintech, and cyber security. Absolute early-stage startups are not being considered because Tech M wants “steady, scaleable ideas” it can take to market soon. This is in addition to the 30-odd startups already under its tutelage. The company is looking to step up investment in these entities.

One of the startups that will be a part of TechM Nxt is ContextSpace Solutions, an Israel-based privacy research and development firm.

“We have strategically partnered with Tech Mahindra to develop the world’s first global software privacy ecosystem, MyData Shield, to enable software developers and startups to meet global privacy and data protection regulations… Tech Mahindra’s initiative to discover and strategically engage with innovative startups and accelerators as part of their TechM Nxt charter is enabling us to explore newer technologies and business models that provide highest impact for both of our customers.”

In early 2016, Tech Mahindra was the first Indian corporate to set up a ‘startup garage’ for its in-house entrepreneurs. It also set aside $150 million to invest in internal and external startups. As many as 15 businesses have emerged from in-house ideas, Tech Mahindra said.

Jagdish says, “It all started with the launch of our internal collaboration and innovation programme IRIS (Ideate, Refine, Implement, Shine) in 2012. Initially, we encouraged our own employees to come up with ideas and solve problems. The real tech disruption started happening about two years ago.”

Some of the ‘external startups’ it has backed so far are Saral Rozgar (the largest blue collar job portal in Asia), MoboMoney (a contactless digital payment solution that converts cash into e-cash), Microgrid (a service backup business protocol) and Education Lanes (a virtual interactive learning platform that provides cloud-based education and training services for working professionals).

MoboMoney, for instance, was a bet taken much before the country’s digital payments industry exploded. The service launched in 2015 (a year before demonetisation altered the landscape of digital payments) in what was India’s first commercial NFC ecosystem rollout.

“We are taking the lead to set up an ecosystem, wherein digital payments can be accepted irrespective of form factors or service providers in an interoperable and device-agnostic manner. The simplicity is in the Tap and Pay experience as against remembering complex syntax or having any knowledge of using the internet or mobile application.”

In January 2017, Tech Mahindra launched InnovateMK, an incubator that will work with startups in UK’s Milton Keynes region. Over the next two years, Innovate MK looks to back about 50 ventures in emerging tech. Local entrepreneurs would get coworking facilities, access to key startup events, mentoring and networking support from the investment community, and go-to market opportunities.

Why Milton Keynes of all places in the world?

“A significant amount of work is happening there in areas like smart cities, elderly care, etc. Milton Keynes is being used by startups almost like an experimental region to test their concepts. We are involved with several stakeholders.”

Besides Tech Mahindra, InnovateMK is also supported by Lividia (providing serial entrepreneurship experience), The Cube Athens (one of the incubators in Europe with core expertise in running incubators) and the Milton Keynes Council (through its Invest MK business initiative).

Tech Mahindra has developed a police emergency response management system — UP Dial 100 — in India’s largest state Uttar Pradesh and that has proved to be a success. The company says UP Dial 100 has saved over 800 lives so far. The citizen response call centres receive at least 100,000 calls per day, a majority of which are responded to in five seconds.

Jagdish reveals, “The government engagement has doubled in the last two years. Whether it is UP Dial 100 or initiatives around GST or Aadhaar, there are programs that can change the way a government operates. We are ourselves engaged in several smart city projects in India. Several municipalities and commissioners are getting involved now.”

While the government is evidently backing startups, the jury is still out on whether India needs a startup policy or not. Tech Mahindra, however, is sure it does.

Jagdish, who’s a member of the CII Startup Council, notes,

“India does need a policy for us to create a startup environment in the world. Our competition has to be countries which are already enabled and have tremendous startup growth. A policy will give us an opportunity to create more deep technology startups.”

Tech Mahindra reckons the opportunity and challenge is the same when you are working with new technologies. While fast, emerging tech opens up new avenues each day, it is the people, says Jagdish, who have to “constantly re-skill and up-skill”.

“What they know today might not be relevant tomorrow,” he says.

The company plans to engage with limited startups that are allied with its core business areas. The focus will stay on B2B startups, especially in the areas of communication, connected devices, fintech and security, that can help the firm grow its customer base and generate new revenue streams.

“That is the end goal. It is ultimately about creating business impact.”