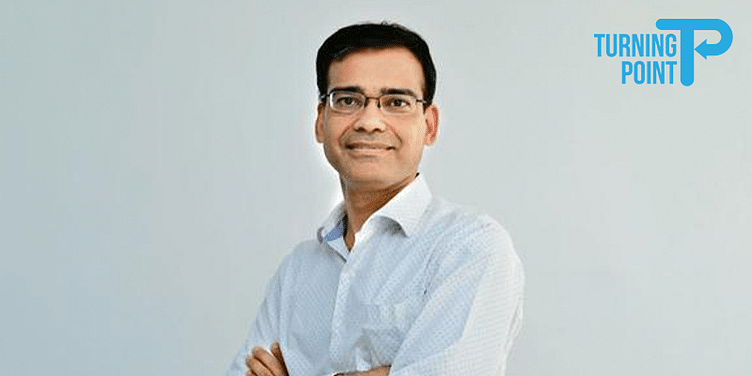 Turning Point is a series of short articles that focuses on the moment when an entrepreneur hit upon a winning idea. Today, we look at Gurugram-based Indifi Technologies, a debt-financing startup that facilitates SME lending

While Alok was looking to return to his entrepreneurial roots and set up his next business venture, at the same time, US-based VC firm ﻿Canaan Partners﻿ was looking to set up its base in India. Caanan brought Alok on board, who worked with the venture capital firm for nine years.

While working with Caanan, Alok identified there was a huge financing gap in the MSME sector, with an estimated $397 billion of unfulfilled credit requirement.

“When I came out of Canaan, I had three business ideas - one was about lending business to SMEs, the second idea was about chronic disease management, and the third about supplementary education. While I invested in startups in the two sectors, the third idea was Indifi,” Alok says.

To enable the country’s micro and small enterprises gain greater access to debt financing, Alok started ﻿Indifi Technologies﻿ along with Siddharth Mahanot in 2015.

“MSME-focused online lending seemed like an interesting place to begin. Lending platforms were finding global traction and were a good fit for addressing the financing gap in the Indian MSME sector. We conducted preliminary research and established Indifi with a mission to address the lack of credit available to smaller businesses. It was the best idea for us, both from an opportunity perspective and our respective skill sets,” says Alok.

He adds: “Indifi’s idea was to cater to this market with unique digital lending solutions that enabled smaller businesses gain access to credit. We wanted to create a platform that facilitated financing solutions that were tailored to the specific requirement of the industry in which the borrowing business operated,” explains Alok.

“The addressable market for MSME financing is massive. Catering to this demand-gap is a challenge by itself, but becomes even more challenging when one considers that different industries have different requirements and risk triggers. On top of it, the digital adoption in India was nowhere at the level that it is at right now. Being a new player, we also needed to create awareness about the differentiation that our offerings delivered.”

Today, Indifi Technologies serves about 10,000 active customers. It claims to have also facilitated more than 25,000 loans for MSMEs across multiple sectors, including travel, hotel, ecommerce, trading, restaurant, and retail. It currently has more than 80 partners, and is catering to customers in over 200 cities.

According to Alok, their goal is to serve 1,00,000 active customers in the next four to five years. “We are looking at both horizontal and vertical expansion to strengthen our product portfolio. We will be expanding into newer verticals and will also be looking to penetrate deeper into the sectors that we currently cater to.”

Alok says that with tech disruptions such as account aggregators and GST data in the pipeline, the team plans to upgrade its in-platform framework to facilitate better decision-making and to ensure more creditworthy businesses and individuals have access to the credit they need.