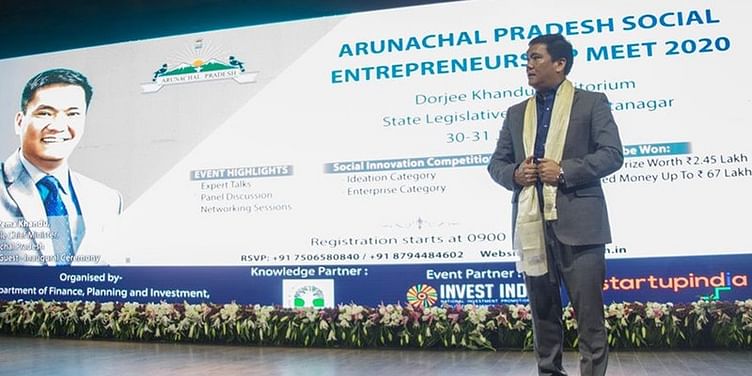 At the APSEM meet, Chief Minister Pema Khandu reiterated his government's plan to work with social sector startups. Special Secretary Himanshu Gupta talks to YourStory about what Arunachal Pradesh has in offer for entrepreneurs.

Under the leadership of 40-year-old Pema Khandu, the Chief Minister of Arunachal Pradesh, the Northeast State is positioning itself as the place for startups and other large companies.

“Startups will kick-start the vision of Prime Minister Narendra Modi to achieve a $5 trillion economy in the coming years,” Chief Minister Pema Khandu had said in a recent press conference in Itanagar, adding that startups across India working in the social sector can work together with his government to promote sustainable development, and add to building up its startup policy.

“Please come forward and convert your ideas into something which you would be proud of and in the process help in building the State,” Khandu had stated.

Breaking down its startup policy  for ﻿YourStory Media﻿, Himanshu Gupta, IAS, Special Secretary to the Government of Arunachal Pradesh (GoAP), speaks about the future of business in the State on the sidelines of the first ever Arunachal Pradesh Social Entrepreneurship Meet (APSEM), held in capital city Itanagar.

Excerpts of the interview:

Himanshu Gupta: There are a lot of new schemes started by the GoAP in the past two years. Under the Deen Dayal Swavalamban Yojana Swalamban scheme, the GoAP has an MoU with SBI to support startups up to a project cost of Rs 1 crore.

Front-ended seed money of up to Rs 40 lakh is given by the State government, channeled through SBI. The projects are selected by a district-level committee and screened by the credit team from SBI.

APSEM 2020 has been conducted with an aim to attract enterprises working in the social sector. The State is lacking in most of the socio economic indicators due to its remoteness. It requires unique and innovative solutions to deal with the problems, primarily in social sectors viz. health, education, agriculture and allied sector.

On the one hand, the State will benefit from innovative and new technologies being used by the startups at an economical cost. On the other, these startups will get the initial push and necessary funds to grow. Thus, it will create a win-win situation for both the government and budding enterprises.

APSEM received 111 applications under ideation and enterprise categories, of which 32 were selected for pitching rounds.

They will be given seed money under the condition that they will have to invest in the State of Arunachal Pradesh.

YS: What are the immediate needs to prepare the State as a tourism hub and a business services hub?

HG: Arunachal Pradesh has huge potential in the tourism sector. The State has scope for adventure tourism, spiritual tourism, cultural tourism, niche tourism, and eco-tourism. It is adopting a multi-pronged strategy to tap its tourism potential.

The State government has identified nine key tourism circuits. A tourism policy is under the anvil, and it will provide incentives for private players to establish wayside amenities, developing infrastructure on a PPP mode.

Under the State Industrial Policy 2020, capital subsidy will be provided to enterprises who wish to set up hotel infrastructure in the State. The Government of India is also planning to establish a software technology park in Arunachal Pradesh under the Software Technology Parks of India (STPI) scheme.

YS: Are you also creating a manufacturing hub?

HG: The State has an industrial estate at Niglok. Primary manufacturing units can apply for establishing their units in the State. They can avail of benefits under both the North East Industrial Development Scheme (NEIDS) 2017 scheme of Government of India as well as the Arunachal Pradesh Investment and Industrial Policy 2020.

Science, technology, and innovation forming the core of our State strategy, we want to develop an ecosystem for MSMEs and entrepreneurs so that local people thrive, and are able to solve for problems that are unique to our geological, cultural, and demographic uniqueness. This is why the government prioritised the startup policy.

YS: What can make the eastern regions of India a business destination, and how can Arunachal Pradesh draw global investments?

HG: The eastern region has the potential to become the global cultural and spiritual tourism hub of the world. In Arunachal Pradesh alone, there are around 26 major tribes and 110 sub-tribes, with each tribe having its own language, cuisine, folklore, etc. If we take all the Northeast States together, we may have more than 500 sub-tribes.

Northeast India is a multicultural area where people have still preserved their local culture and tradition, something which is of interest to global tourists. The region is also a biodiversity hotspot that has the highest number of flora and fauna species in the country. Thus, the region has the potential to obtain global capital for tapping its tourism potential.

YS: What are the highlights of APSEM? How much capital was committed by private organisations at the event?

HG: We had fruitful discussions with tourism, education, and social entrepreneurship incubators and accelerators who have pledged to work with the winning startups by providing support and bringing their own models to the State.

We have discussed with IIT Kanpur SIDBI Innovation and Incubation Centre and IIM Calcutta Innovation Park to set up a ‘Co-Incubation Centre’ in Arunachal Pradesh. Based on the experience gained from APSEM, we will be conducting more vigorous startup challenges in the social sector by identifying local problems.

We will frame a platform where we can engage with startups who are working in the social sector. Our startup policy will incorporate special incentives for social enterprises that work in Arunachal Pradesh.

YS: What is your startup policy and what industries are in focus in Arunachal Pradesh?

HG: We would be shortly releasing the startup policy, as the purpose of inviting academia, innovation leaders, businesses, and secretaries for the meet was to discuss the best practices and ensure the team here brings the local perspective as well as focuses on specific industries.

While tourism is a bright spot from a marketing perspective, we are also heavily engaged in agriculture/horticulture processing and hydropower and clean energy sector.