Budget 2020: Funny tweets and memes that will leave you in splits 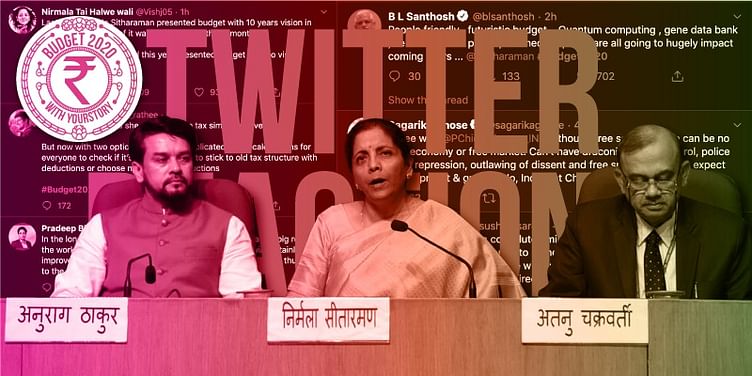 As Budget 2020 takes over Twitter, Indian users take to the internet to showcase their creativity with hilarious memes and post-budget reactions.

Love it or hate it, but Indian Twitterati never disappoints when it comes to making their opinion loud and clear.

And it was no different when it came to Budget 2020, presented by Finance Minister Nirmala Sitharaman on Feb 1 in the Lok Sabha. Especially, the tax-paying citizens of India, who remained glued to the screens on Saturday hoping for some relief in the FM's income tax regime, were positively rewarded with Sitharaman announcing major cuts.

In a presentation of two hours and thirty minutes, the Finance Minister laid out a slew of income tax reliefs for the common man.

And for income between Rs 10 lakh and Rs 12.5 lakh, people will pay reduced a tax of 25 percent. For earnings up to Rs 5 lakh, no tax shall be levied, according to the FM

However, what the viewers didn't anticipate was the delay – the tax-related announcements were made at every end of what was already a pretty long, charted-out Budget.

Now, as one would expect in such situations, the traces of disappointment and disapproval made its way – no points for guessing this one – to the internet.

Here's a handpicked collection of the choicest tweets, that pretty much sums up desi ﻿Twitter﻿'s reaction to Budget 2020.

Cant blame him.. Anyone else struggling to keep awake ?#Budget2020 pic.twitter.com/UbofdMq4Wg

For those who were not so impressed with the new schemes announced this year.

#Budget2020
Chumma keep announcing schemes. Maybe they should start each budget with a small report card on the status of the schemes announced last year.

This is for the middle-class janta, pinning their hopes on FM.

Are you keeping up with the FM's announcements on taxes?

Almost 2 hours since the #Budget2020 speech.

Get your popcorn ready, this is set to be a long ride!

It’s been more than 2 hours and the budget is still going on!!! #Budget2020 Even Indian movies are now shorter!

I think we need a lunch break in today's #Budget2020

This budget was like that Haldiram bhujia whose packet you tore open 3 days ago, but forgot to tie.#Budget2020