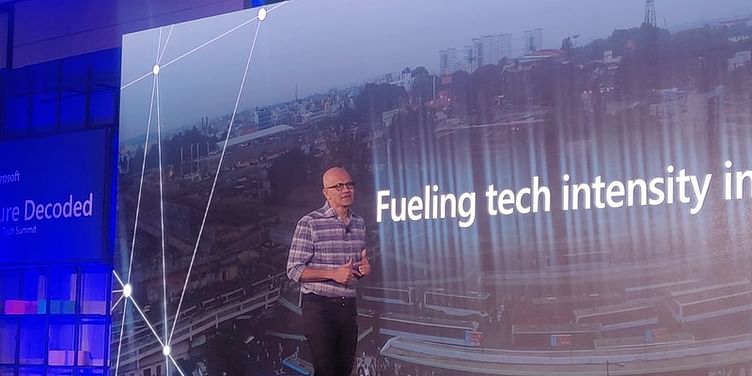 Satya Nadella has the most coveted job in the world. As the CEO of Microsoft, he is responsible for helping the company strategise for the next decade, where there will be 50 billion connected devices. And for this, Microsoft wants to democratise AI.

Speaking at Microsoft’s ‘Future Decoded’ event in Bengaluru, Nadella said he believed Microsoft could create a platform for 4.2 million developers in India.

“AI should help us do science better. The ability for a scientist to read all of what is happening and having to come up with a hypothesis can only happen with AI. Microsoft must change this and bring infrastructure to the world, where every company can create its own AI. We have to democratise AI by making the frameworks available to all,” he said.

Nadella added that developers should focus on data privacy, build responsible AI that is ethical and inclusive, and create digital safety and security.

“In the last decade, there was tremendous impact in India where consumer businesses got built. The next decade is all about distributed and ubiquitous tech focused on every industry. Tech is everywhere - it is in stadiums, hospitals, cars, and refrigerators. Technology has changed the way we experience things. The future will be all about multiple sensors and multiple devices, and, at Microsoft, we call this the tech Intensity,” he said.

Nadella added: “Every company is becoming a software company. Developers should think of how they want to reinvent the wheel. Technology is the only malleable thing humans have created, and we can create economic prosperity.”

Nadella stated that technology should be inclusive, trusted, and sustainable.

“We are living in a time where we have to create a sustainable world. We have to build data centres that are renewable. Tech intensity is equal to the increase in tech adoption and tech capability, and tech intensity can grow only when companies build trust, inclusivity, and sustainability,” he added.

Using tech to build and scale

According to Gartner, SaaS is a $116 billion market today, and will grow to become a $151.1 billion market by 2022. In the business of apps for enterprises, Microsoft is a leading company. Microsoft is number one followed by Salesforce and Adobe, says a report by Synergy Research.

Satya Nadella believes the world will be dominated by distributed computing because there will be 50 billion devices connected by 2030, and the world will generate 175 zettabytes of data by 2025.

To prepare for this data proliferation, Microsoft has 57 data centre regions, of which three are in India, based in Pune, Chennai, and Mumbai. The future, Microsoft believes, will be in using the edge along with the Cloud to power apps.

Addressing a gathering of top industry leaders and the developer community, Nadella also gave examples of how Indian companies are using Microsoft’s services and technology to build and scale.

Nadella said Piramal Glass was using IoT in factories to track its entire production cycle and the quality of the product. He also gave example of how Unicorns like Myntra, ﻿InMobi﻿, and ﻿Udaan﻿ used Microsoft services to build large successful companies by being cloud native with Microsoft Azure. Some of the other startups using Azure include ﻿Sun Mobility﻿, ﻿Bizongo﻿, ﻿ElasticRun﻿, ﻿Bionic Yantra﻿, and Spektacom.

Anant Maheshwari, President, Microsoft India, said, “There are 4.2 million developers in India. India is the number one developer pool in the global market, and there are 650 million people under the age of 25. The low-code, no-code movement can make every person a developer.”

Before Nadella stepped onto the stage to deliver his talk, Microsoft invited Amod Malviya, Co-founder, Udaan, India’s fastest unicorn, to comment on the role of the developer.

Amod said: “There were a bunch of beliefs when we started as founders. Speed is a differentiator, and the kind of learning you go through in a startup is phenomenal. Disruption needs power of tech. We exposed engineers to the problem with our supply chain teams to solve for real-world problems. Tech is more accessible than ever because you don’t need to understand AI in detail. Engineers need to have belief to make impact.”

It’s more about being there when customers need you, say D2C experts at BONI