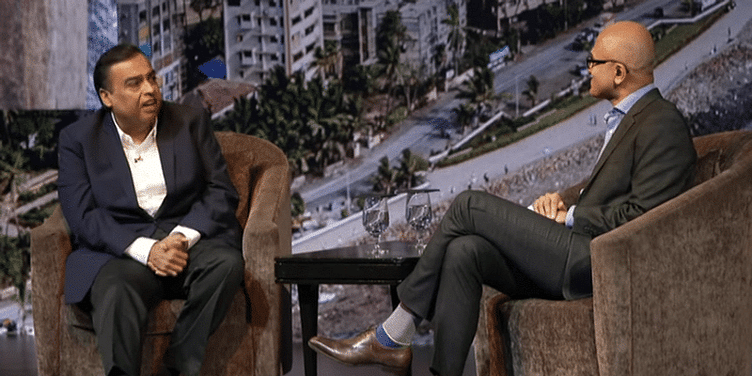 Reliance Industries Chairman Mukesh Ambani thanked Microsoft CEO Satya Nadella for his leadership and commitment to India. He also went on to speak about digital opportunities in India.

Microsoft CEO Satya Nadella, who is on a three-day trip to India, addressed an august gathering of India's leading CEOs in Mumbai this morning.

His keynote culminated in a fireside chat with India's wealthiest man and Reliance Industries Chairman Mukesh Ambani, who congratulated Nadella on his leadership at Microsoft and commitment to India.

"I congratulate you for your leadership at Microsoft and the transformation you have brought about. I also thank you on behalf of all of us for the scale at which you have committed to India. Even some years ago, we would not have anticipated it," Ambani said.

Nadella returned the compliment by acknowledging the disruptive impact of Reliance Jio on India's technology and business landscape. He highlighted how Jio has empowered people and businesses by giving them access to the most affordable internet in the world, increasing data consumption by leaps and bounds.

Since 2016, Jio has cut down data cost in India from Rs 300 per GB to Rs 12 per GB, which Ambani had compared to the price of a 'vada pav' (Mumbai snack) during the network's launch.

The Reliance Chairman went on to attribute India's digital and mobile revolution to the average Indian, calling it "the people's boom".

"The India that President Trump will see in 2020 is very different from what Bill Clinton saw earlier. This is really the people's boom. We have the opportunity to become a premier digital society in the world. All our development will be enabled by tools of technology."

Ambani also shared how technology can help create an equal and accessible society, and give everyone the chance to be empowered.

"My father founded Reliance 40 years ago as a startup with one table and one chair. Then it grew into a micro enterprise, a small enterprise, and now, we can call it a large enterprise. Every shopkeeper and entrepreneur in India can become Dhirubhai Ambani one day."

On the consumer side, Nadella quizzed Ambani about the importance of gaming technologies – one of Jio's focus areas lately driven by Ambani's son Akash.

"In the next decade, you might also become a gamer, Mukesh," the Microsoft CEO said.

"For those of us who do not understand gaming, it might be hard to imagine that in this decade, gaming will be bigger than music, movies, and TV shows put together."

Microsoft and Reliance have entered into strategic business partnerships to roll out a fully-enabled tech platform for businesses enterprises of all sizes and types.

Both companies believe that the B2B opportunity will be far bigger than the "consumer pie" that Jio has feasted on in the last three years.

"We are working with Reliance across the entire stack. They have taken a platform approach to use technology to build more technology. Reliance and Microsoft together can make a deep sectoral impact."

Earlier in the day, Nadella had also highlighted the imperative need for Indian organisations to build their own "technology intensity".

"That will be the defining thing in the next decade. As Microsoft, our mission is to help build more independence in companies," he explained.

"Digital transformation is ultimately about the outcome," added Nadella.