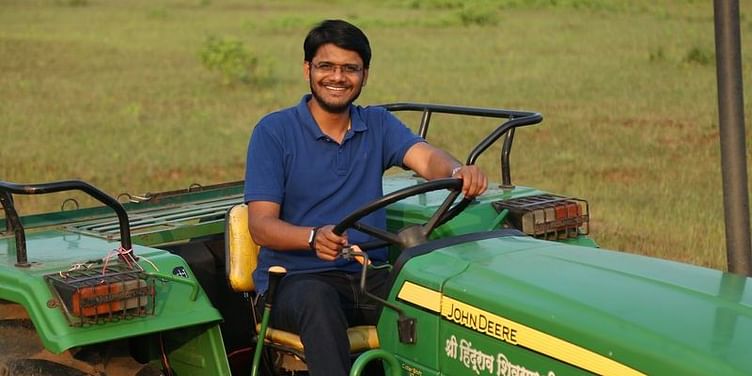 Pravin Shinde has spent a lifetime in and around farms. Well, almost.

Hailing from a farmer family in Maharashtra’s Satara district, he has been acquainted with agricultural lands and systems since boyhood.

Pravin went onto pursue a bachelor’s degree in agricultural science, and later, spent more than 10 years working at his brother’s agrochemicals and fertilisers firm. This stint brought him close to thousands of farmers in one of India’s leading agrarian districts.

It also made him realise that even though farmers weren’t opposed to farm mechanisation, they were often misled by local dealers and suppliers when it came to prices and technical knowhow.

That is what Pravin wanted to solve with ﻿KhetiGaadi﻿, which he founded in 2016.

The pain point it fixes

The Pune-based agritech startup has built a one-stop agri-ecommerce marketplace that connects farmers, tractor manufacturers, contractors, dealers, brokers, service stations, and agricultural experts.  Not only this, but KhetiGaadi also serves as a platform that matches farmers with agri-lenders and farm insurance providers.

Its mobile app, available in 10 regional languages, has recorded 3.5 lakh installs across platforms, and has a monthly engagement rate of 1.9 million.

The startup signed up 50,000 farmers within a year. Since then, it has connected four million farmers and 22 tractor manufacturers and suppliers through its platform, registering a gross merchandise volume (GMV) of Rs 50 crore.  “We expect to double the GMV to Rs 100 crore by 2021,” Pravin tells YourStory.

He elaborates, “There are about 40 crore farmers in India, and 50 to 55 percent of our economy is dependent on agriculture. Still, the average farm mechanisation rate is only 40 to 45 percent, compared to developed markets like China, Brazil, the US, where it is more than 90 percent. So, we are just getting started.”

In 2018, the bootstrapped startup was recognised by the Department for Promotion of Industry and Internal Trade (DPIIT) under the Ministry of Commerce and Industry.

KhetiGaadi’s primary objective is to improve farmers’ access to modern equipment and implements and make buying, selling, and renting hassle-free and transparent. It also educates and empowers the farming community with the right guidance on modern agricultural practices.

The agritech startup lists information, prices, and reviews of more than 20,000 new tractor models and over 3,000 old tractor models from top OEMs. These include Swaraj, ﻿Mahindra Rise﻿, Sonalika, Eicher Tractors, VST Shakti, Force Motors, and others.

It also has a KhetiGuru app through which farmers can stay abreast of tractor-related news, learn of land preparation and crop protection methods, get updates on weather changes that can impact the harvest season, and so on.

The founder says, “We not only educate farmers but also encourage them to deploy farm mechanisation, direct them to the right sellers who offer credible prices and discounts, and help them improve yields, avoid crop delays, and increase earnings.”

Without divulging names, Pravin says, “On an average, Rs 3-4 lakh in credit is transferred to a farmer’s account to help him acquire tractors and implements.”

The agritech startup operates on a hybrid business model.

There is a B2B component that involves tractor OEMs paying KhetiGaadi a commission for listing, marketing, advertising, and selling their products.

It also earns from dealers and distributors who can liquidate their old inventory on KhetiGaadi. Additionally, KhetiGaadi charges a service fee from farm financiers that utilise its four-million-strong network of farmers to distribute their insurance products.

On the farmer side, however, the platform is absolutely free.

Farmers can buy new equipment on a Flipkart-like ecommerce environment, and also get in touch with other farmers directly to purchase pre-owned/used tractors through an OLX-like listings marketplace.

“The size of the used tractors market is almost double that of new tractors,” Pravin shares. Overall, India's farm equipment market is projected to reach Rs 9 lakh crore by 2022, according to NABARD.

KhetiGaadi competes with Tractor Junction, TractorGyan, MachinePhD, and others. But the founder asserts that it is the only “full-service agri solution” in India right now.

The agritech startup plans to expand its pan-India presence in the next two years by setting up KhetiGaadi Experience Centres at multiple locations.

“These would be farm mechanisation touchpoints for farmers where they can walk in to see and feel tractors, implements, and other equipment before they purchase or rent them on KhetiGaadi," the founder explains.

To fund its expansion, KhetiGaadi is looking at a Series A round of $5-7 million this year. “We also need a lot more manpower – about 1,000 people who can directly engage with farmers on farm mechanisation,” says Pravin.

Given the startup’s current team size is only 25, that is still a long way to go.

But the founder is hopeful that by the end of this decade, KhetiGaadi would be able to grow India’s farm mechanisation rates by at least 15 percent.

“We are doing our bit to improve living standards of our annadatas and bringing the farming community into the mainstream,” adds Pravin.