[WATCH] The week that was: from Bengaluru's rise in startup power to why founders push boundaries in tech 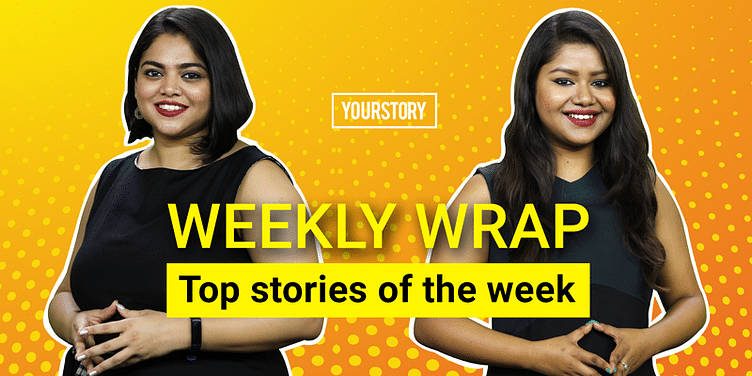 This week, we feature startups that have homed in on everyday struggles, be it those of the common man or for enterprises. From AI platforms for call centres to snack options for the health-conscious, here are some inspirational stories.

Continued research shows that the quality or productivity of your day depends on how you spend your mornings. The daily commute to work, usually marked by delays and stress, isn’t the best way to maximise your morning time and can completely derail your plans for the day.

Keen to change this is Bengaluru-based two-wheeler rental startup Ontrack Technologies. Incepted in 2016 in the classrooms of Christ College, Bengaluru, Ontrack aims to provide users with an agile, swift, and more independent mode of transportation.

Ontrack entered the B2C monthly rental space in 2017, and claims to manage the fourth-largest fleet in the country. It also has a B2B model, partnering with Swiggy and Nestaway.

Harshit Sonthalia, a BBA student of Christ College, wanted to own a bike. His requirement was not for the thrill of freedom, but solely to escape Bengaluru’s infamous traffic. But he neither had the money to purchase a bike or to routinely splurge on cabs and meter-less autos.

“My personal struggle and travel stories of my fellow batchmates made me realise how we were all in the same boat,” Harshit says.

Moving on to a startup making waves with its AI platform.

Observe.ai Co-founder Sharath Keshava was working out of Manila, in the Philippines, which is considered the BPO capital of the world. The evident problem statement with call centres was latency when it came to driving faster and better customer experience and the classic machine-replacement phenomenon.

Founded in May 2017 by Akash Singh, Sharath Keshava, and Swapnil Jain, Observe.ai empowers call centre agents to do their jobs better. Its voice AI platform provides the agent with real-time feedback on customer sentiment and guides them on the next best action during a customer call.

The startup claims to have developed a machine capable of analysing 100 percent of customer conversations, to generate better business outcomes. Though headquartered in California, Observe.ai has an office in Bengaluru.

Startups journeys are often very inspiring because they tell us a story of how solving for real-life problems can help them hit jackpot. This story pertains to blue-collar workers.

Kunal Patil, an NYU Stern School of Business graduate, had spent more than a decade in investment banking and financial services before starting WorkIndia. And, like most good creations, this too was born out of necessity.  Sometime in 2015, Kunal was on the lookout for data entry freelancers in Mumbai, and it turned out to be a struggle. Despite portals like BabaJobs and Quikr Jobs, job discovery and recruitment in the blue- and the grey-collar segment was largely broken.

This was primarily because unlike the white-collar workforce that relied on job sites, online ads, and other formal sources for information, blue- and grey-collar workers were dependent on informal references from friends or family.  There was no organised platform that could match these job seekers with relevant recruiters and opportunities. WorkIndia set out to fix this problem for a blue/grey collar economy that is said to be the largest in the world.

And our Techie Tuesday of the week was a former CTO of Rivigo, the Gurugram-based billion-dollar logistics startup.

“When one sets an expectation, it becomes a self-fulfilling prophecy. Thus, it is always better to aim high and miss, than aim low and hit,” says Qasim Zaidi.

Starting his journey from Aligarh Muslim University, Qasim has worked with unicorns such as Paytm and Indonesia-based Tokopedia. He later joined joining Rivigo but quit the company in search of better opportunities.  “I always switched organisations at unexpected times. I quit Paytm when it got funded by Alibaba; left Tokopedia after a year it became unicorn; and more recently, Rivigo. People often questioned my decisions, but I believe the best time to quit is when one is at the peak of their performance,” he says.

From brazen decisions by gifted techies to a deep-dive into why startups still love Bengaluru. One of our reporters went ahead and discovered how a suburb is reshaping itself as a hub for startups.

Bengaluru, India’s startup capital, is home to more than 5,234 startups, a report by TiE-Delhi-NCR and Zinnov stated last September. Its posh neighbourhood, Koramangala, was once crucial for the startup ecosystem in India. With young techies, affordable pubs, and apartments turned into office spaces, Koramangala reflected everything that a startup universe would look like.  Further, Koramangala once housed India’s most successful startup story - Flipkart.

Identified with maddening traffic, broken roads, and cramped up buildings, in the last five years, the startup ecosystem has gradually started moving to the neighbouring HSR Layout.

Finally, a startup story that champions healthy snacking, right at a time when we are revisiting fitness goals. But as it always goes each year, most of us give up within the first few weeks, because, let’s face it, for how long can apple slices and greet tea satisfy our evening-time hunger pangs?

Chakhna Shot wants to tell you that your 4pm pick-me-up needn’t be so drab. Operating under parent company Belly Fit F&B, the Gurugram-based startup was founded in October 2018 by IIM-Ahmedabad alumnus Amar Choudhary to provide healthy snack options that don’t scrimp on taste.

The startup was recently selected for Amazon’s Launchpad programme, a platform by the ecommerce giant that showcases cutting-edge products of innovative startups.

“On doing some research I found out that healthy snacking was limited to the premium segment. Cracking into the mass segment is what I aspire for. I believe that irrespective of the buying power, every individual should get access to good snacks,” says Amar.