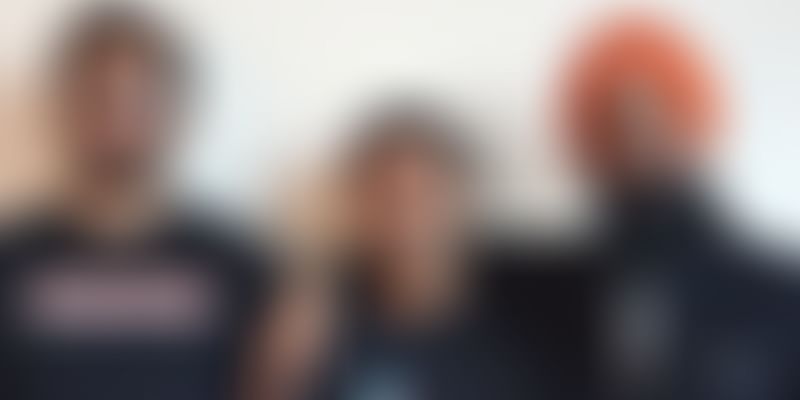 Twenty-two of the world's most polluted 30 cities are in India, according to research by Swiss-based group IQ AirVisual and Greenpeace. The 2019 edition of State of India’s Environment (SoE) Report revealed that air pollution was responsible for 12.5 per cent of all deaths in the country.

Air pollution is a matter of great concern and governments, organisations, and startups are trying to do their bit to make the atmosphere safer and cleaner. Bengaluru-based environment intelligence startup Ambee is one of them.

Founded in 2017 by Madhusudhan Anand, Akshay Joshi, and Jaideep Singh Bachher, Ambee was started with the aim to create an “environmentally informed society” by providing access to data and tools that enable a better living experience.

Pollution in India’s urban areas is usually due to a mix of different factors, including traffic, heavy industries, and fossil fuel burning power plants.

Ambee claims to have the largest and most accurate air quality data in Asia, and believes its technology and knowledge can “help governments, healthcare, and private companies make informed decisions”.

The beginning of Ambee

The idea for Ambee was born when Madhusudhan’s six-month-old son developed severe breathing issues due to air pollution. In his quest to understand more, Madhusudhan started monitoring air quality in and around his residential community.

The founders later found that the nearest air quality monitoring station was located 13 km from his house. He soon put together a rudimentary sensor that could provide real-time data about the quality of air around his residence. He found that the levels of particulate matter (PM2.5) near his house were dangerously high, touching 800 ug/m3.

"The air quality index in most Indian cities is above the government’s indicated healthy range. Despite alarming statistics, little is being done to combat pollution and solve this crisis. There is hardly any reliable data for a common man to understand and gauge the quality of air in his/her immediate surroundings,” Akshay says.

“Ambee was started with an aim to empower the common man with data about hyperlocal air quality in real time to help understand the impact of air pollution, take precautions, and find solutions,” he adds.

Together, they want to ensure an improvement in air quality and – consequently- better lives.

The business of air quality

According to the World Health Organisation, air pollution is the single biggest environmental health risk that we face. The lack of accurate measurement remains one of the biggest factors affecting humankind’s fight against air pollution.

“Outside major cities and metros, there is nearly zero measurement of air quality. This indicates that we are unaware of the quality of air we breathe, the impact it has on our health, and whether the steps taken or solutions implemented are actually improving air quality around us,” Madhusudhan says.

He says Ambee aims to measure and democratise access to data and eventually work towards improving air quality for future generations.

This industry is at a nascent stage worldwide and in India. Traditionally, large, container-sized monitors have been used to measure air quality, and these cost thousands of dollars. This is a major reason for the lack of data. A few companies around the world have tried using open-source models, but the results have been mixed.

“We experimented with the same, before using a multimodal approach with proprietary IoT sensors,” Madhusudhan says.

Amid rising pollution levels, how Kaiterra helps to keep a check on air quality in Delhi

What does Ambee do?

In addition to government sensor data, IoT sensors, and open source data, Ambee uses satellite imagery, weather and meteorological data, and human indicators like population and garbage burning. Its aim is to build large-scale data models, which give air quality information down to a granular level in real time.

At a postcode level, the startup covers multiple countries around the world. It has gathered air quality data for over one lakh pin codes across 65 countries. “We are in the process of mapping major Indian cities at a street level.”

Ambee's data is accessible for free through websites and through a mobile app. It works with multiple agencies, including those that use AI and data for large-scale social good.

The founders have also launched a website,  www.indianairpollution.com, which offers a quick overview of real-time air quality information.

Ambee’s first client was an air purification major. “We demonstrated our product and technology. The accuracy of our data and the customisability of our product impressed them, and they were on board,” Akshay says.

However, like every startup, the founders had their challenges.

“An early challenge was whether to go down a hardware path or avoid it. Hardware can accelerate early sales, but plateaus quickly and poses problems of scale, supply chain, and defensibility. We switched to a data play, and that’s when interest from investors went up significantly,” Madhusudhan says.

Creating awareness about the services and impact Ambee could make was another tough challenge, one they are still working on.

Ambee’s business model is simple: selling data and services to businesses. The B2B market is the focus area, and the founders have seen traction across varied domains.

The startup has use cases across a range of industries, including digital health, preventative healthcare, health and wellness, air purification, smart city and offices projects, and campaigns. Ambee also works with clients in insurance, aerospace, and automotive fields.

The founders say the ability to measure the environment accurately in real time will also have a major impact on workflow, productivity, real estate, and public policy.

The customer pipeline is domestic and international, and the startup’s services have also interested administrations.

Ambee claims that the fact that it brings a million-dollar cost to one tenth when deploying air quality sensors stands it in good stead.

WAYU, the air filter device that will make sure the people of Delhi get to breathe fresh air

Ambee fits into the IoT/hardware and proprietary real-time analytics category, which can offer data as a service. Microsoft believes 50 billion devices will be connected by 2030, and all of them will use AI to harness and better human potential.

The founders do not want to disclose sales of the product and client names at this point.

“We raised a small round from marquee angel investors in India. We sought out people who understand the scale of this problem, how it’s actually affecting this generation and future ones, and how we’re looking to solve it,” Akshay says.

The investors include Rajan Anandan, Ambarish Kenghe, Dina Wadia, and Anuj Munot. It is also backed by some promoters and family offices along with Venture Catalysts and Techstars.

“We work with a combination of large and small enterprises across the world, and expect to ramp that up in the next 24 months,” Madhusudhan says.