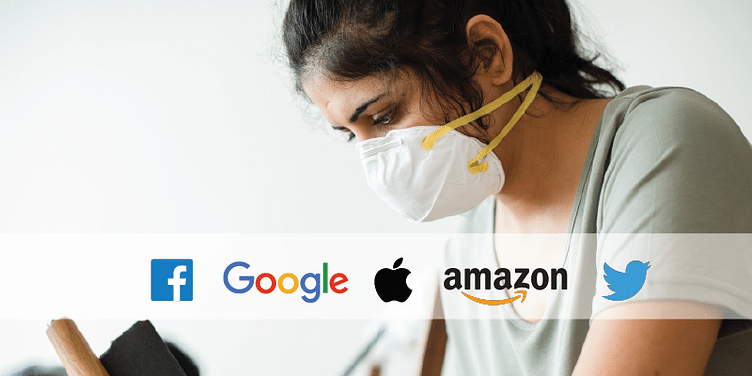 Many companies have asked their employees to work remotely, cancel business travel, and cut down operations in areas where the infection is prevalent.

The recent coronavirus outbreak (officially known as COVID-19) that originated in Wuhan, China, has taken the world by storm. As of March 4, 2020, more than 90,000 total cases have been reported worldwide with the disease killing over 3,000 people so far, most of them in China and followed by South Korea, Italy, and Iran.

The virus has spread rapidly over the last several weeks and has been deemed by the World Health Organisation (WHO) to have a “very high” risk of becoming a global pandemic.

Here is what some of the biggest companies are doing to ease the concerns of their employees regarding coronavirus and make the workplaces safe:

To protect the health and safety of its employees, the social networking giant Facebook has halted all non-essential travel to China of its staff. The company also asked employees who had recently travelled to China to work from home for a period as caution.

In a Facebook post on Wednesday, its CEO and Founder Mark Zuckerberg said that the social network will give the WHO free advertising for its coronavirus response and remove posts that have false information on the virus.

“We’re also blocking people from running ads that try to exploit the situation — for example, claiming that their product can cure the disease,” he added.

Cook also added that the company has also closed down at least three stores in China because of the coronavirus outbreak.

"We're taking additional precautions and frequently deep-cleaning our stores as well as conducting temperature checks for employees," he said.

Most of Google's 8,000 staff in Dublin, Ireland, — the tech giant's European headquarters — were reportedly asked to work from home on Tuesday after an employee reported flu-like symptoms. The company has also restricted travel to Iran, China, and parts of Italy.

“We continue to take precautionary measures to protect the health and safety of our workforce, in accordance with the advice of medical experts, and as part of that effort we have asked our Dublin teams to work from home,” a Google spokesperson announced it in a tweet.

Google has also temporarily shut down all of its China offices due to the coronavirus outbreak, as well as its offices in Hong Kong and Taiwan. The company is also advising employees in China, or those who have immediate family returning from the country, to work from home for two weeks.

Amazon has announced restrictions on employee travel to and from China as concerns grow over the coronavirus outbreak. The company said it’s approving some exceptions for essential business travel.

The company also said it's telling employees who do travel to affected regions in China to work from home for two weeks before returning to the office and to seek immediate medical attention if they experience any symptoms.

Amazon, on Tuesday, confirmed that an employee who works in the internet giant's home city of Seattle had tested positive for COVID-19.

“Out of an abundance of caution, we are restricting business travel to and from China until further notice and encouraging our employees to follow the health and safety guidelines provided by international health agencies such as the CDC and WHO," an Amazon spokesperson said.

Twitter has asked employees to work remotely to guard themselves against the ongoing spread of the disease.

“Beginning today, we are strongly encouraging all employees globally to work from home if they’re able. Our goal is to lower the probability of the spread of the COVID-19 coronavirus for us - and the world around us,” the company said in a blog post.

“Working from home will be mandatory for employees based in our Hong Kong, Japan, and South Korea offices due in part to government restrictions,” it added.

For those employees who prefer or need to come into the offices, the firm said it would keep its doors open, with the exception to offices in Hong Kong, Japan and South Korea where working from home has been made mandatory.

The major software developer Microsoft and cryptocurrency exchange platform Coinbase have also advised employees in China to work from home and cancel all non-essential business travel.

“We’re asking some employees to start working at home this week,” Brian Armstrong, the CEO of Coinbase, tweeted. “Working from home is not a complete solution but it may help slow the growth of infections,” he added.

Nestle, L'Oreal and Cargill are among several other international corporations which have asked their employees to postpone travel for at least a few weeks. Salesforce on Monday also announced  that it was "prohibiting cross border travel" for all its employees and was "restricting all but the most critical domestic travel."

Both Facebook and Google have cancelled their developer conferences, called F8 and I/O respectively, due to concerns over the spread in large gatherings. Also, Facebook, Twitter and Intel have withdrawn from participating in the annual South by Southwest (SXSW) conferences to be held in Austin, Texas.

Will IoT help India reach the mark of a $5 trillion economy?

With $3.3M in funding, Boostinsider bets on Social Book for YouTube influencer insights