Future of Work 2020: DesignUp’s Jay Dutta deconstructs the state of design in tech 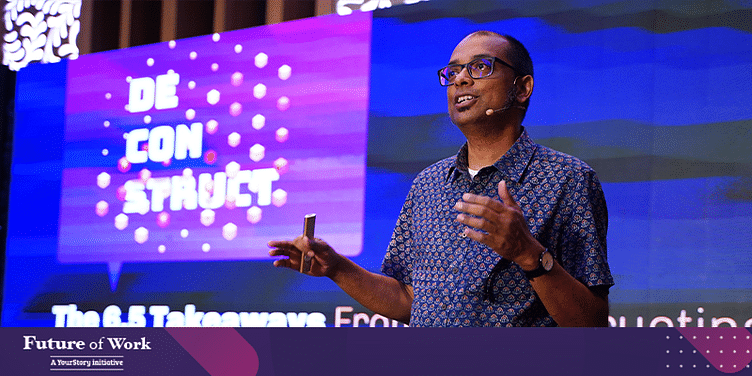 At YourStory’s Future of Work 2020 event, Jay Dutta shared his insights on the report launched by his organisation DesignUp.

Design is viewed as an important vertical in any organisation. It is positioned in a way to enhance the experience, gain attention, and a way of showing impact, creating, and building things.

Sharing his insights and expertise on the same was Jay Dutta at the third edition of YourStory’s Future of Work, India’s largest product-tech-design conference. He has worked as the Head of UX Design at companies like Adobe Systems, Flipkart, among others.

As the Founder of Southeast Asia's largest design-in-tech conference DesignUp and the Senior Vice President in MakeMytrip, Jay spoke about the importance of the design sector in the tech world.

During the session, Jay explained the report that DesignUp had come up with – ‘DesignUp Deconstruct: Understanding the State of Design-In-Tech.’

Released last year, the report has three parts - the past, present, and future of design. “While working on the report, we realised that one-third of people who studied Engineering are in the design sector now.”

Future of Work 2020: ‘Startups should focus on team efficiency and not social media feedback while scaling’

Design as a profession

At present, Jay said that design has become an inclusive profession with people from various backgrounds who are working in the design sector.

According to the report, a majority of the people chose design as a career option because of their interest. Other factors that influenced them were creative childhood, problem solver, serendipity, and parents or professors. A few chose this career path as they simply did not want to pursue engineering.

Speaking about the second part of the report which spoke about where we are as a design profession, Jay said it is important to focus on the different stages of design maturity and what we need to improve.

The report also suggested a few things that a company or individual needs to look into to improve, which includes competition, leadership, teamwork, and scaling to new markets, among others.

According to Jay, in 2020, the design has a seat on the top management table. “Today, designers are moving up the ranks to the proximity of the CEO. Increasingly, a designer is among the first five hires in a startup today.”

Speaking about how to measure design, Jay said, “But to show that you are creating value, you must measure what you are doing. When we asked how the design was measured, chaos ensued. We eventually broke these into a few themes — how we deliver, how our work impacts the business, measured through adoption, engagement, click-through rates, monthly active users (connecting to users) to converting this to revenue, and market share.”

While customer satisfaction emerged as a key criterion, more traditional approaches such as measuring usability, accessibility, and validation also stood out in the results.

Future of Work 2020: Taking a step back can be the quickest way forward, says Tina Ngo of Influx Worldwide

What lies in the future?

According to the DesignUp report, going ahead, one needs to create empathy among employees in a startup. Further, there will be a lack of user research, lack of time, budget, and low design awareness.

To overcome this, design people need to up their game in skilling, Jay said, adding that, “RoI on design will be the new obsession, close coupling with data, and research. There needs to be more light thrown to the UX writing, user research, strategy, collaboration, and motion design. We need to always think long-term.”

“But how do we make sure that what we do is right? Why are we doing it? What are the long-term repercussions?’ Jay asked the audience, adding that one needs to ask these questions to go forward.