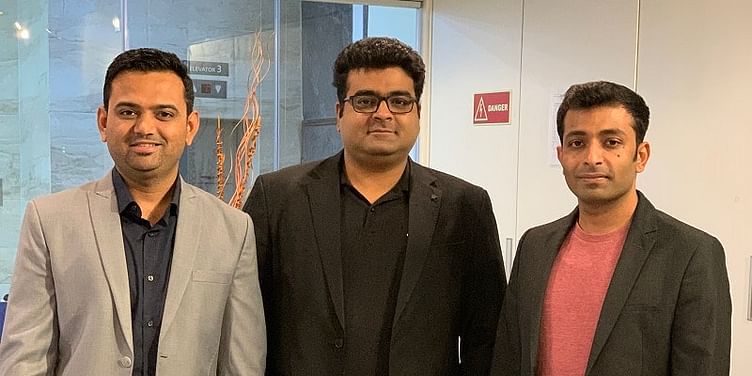 Zlade offers quality shaving products at 50 percent lesser price than its competitors. The startup is recognised by the Government of India and is part of the Startup India programme.

Suraj Chaudhari, a pharmacy student and management graduate from MIT Pune, remembers having paid through his nose for razor blades while in college. “In many instances, some of my friends used a single cartridge for months and even shared blades with their friends,” he recalls.

“Students in my college used to buy a pack of 12 blades from the Army Canteen Stores and shared among friends,” Suraj says.

This is when he realised that a daily-use commodity like razor blade should not cost much.

Suraj roped in his friend Mihir Vaidya, a computer engineer, and started working on an idea in late 2014 to find a solution.

In 2015, the duo launched Blade & Bath, from Suraj’s 2BHK apartment in Pune. Suraj’s schoolmate, Harish Amritkar, an MBA from SIBM, Pune, joined the founding team in 2017.

Over the course of three years, they collected data and feedback from thousands of customers and came up with an improved product line, rebranding the company to ﻿Zlade﻿ in August 2018. That was also when they shifted to an office and a warehouse.

Zlade offers quality shaving products at affordable prices. The startup is recognised by the Government of India and is part of the Startup India programme.

No groom for doubt! These startups are changing the men’s grooming game in India

The general perception among users is that quality razor blades are expensive. In India, the razor blade business is almost monopolised.

“The market leader has over 40 percent of the market share. The cheap razors, on the other hand, offer low-quality blades that can cut your skin,” Suraj says.

Zlade wanted to address this problem. It came out with two types of razors -- four-blade and six-blade. Besides that, it also introduced natural and chemical-free shaving products, such as shaving gels and alcohol-free aftershave.

Zlade targets men between the ages of 22 and 55. It acquired its first set of customers through its website in early 2016.

The three 31-year olds started the business with only Rs 6 lakh from their own savings. Zlade was self-funded until 2019. Recently, it raised an undisclosed amount of investment from an eminent business family, based out of Pune.

“We are using the investment to increase our portfolio and enter more sales channels,” Suraj says.

Zlade’s products are made in the ‘City of Blades’, Solingen, in Germany. “Solingen is famous for its art of blade-making,” Suraj says.

The startup has an agreement with a factory in Solingen, the name of which Zlade refuses to share, where it has been sourcing its products from day one. “We worked with the factory with our feedback from earlier the brand, and sourced new and improved products suitable for the Indian consumer for Zlade,” he adds.

The blades are coated with patented technology, including diamond and titanium, which makes them sharper and long-lasting.

“Our Zlade Safe-Edge is one of the first razors in India, specially designed for people with sensitive skin, minimising nicks and cuts, and preventing ingrown hair,” he adds.

Additionally, Zlade offers its products at a competitive price, without compromising on the quality of the products. According to the founders, the prices are up to 50 percent lower than its competitors.

“Some companies go all out in marketing their blades and razors. This, coupled with the monopolistic nature of the market has enabled the current market leader to charge exorbitant prices for its products as the consumers have no choice but to pay these prices due lack of a quality alternative,” Suraj says.

The startup claims to have partnered with the same factories which makes blades for other leading brands. What makes Zlade offer its products at 50 percent lesser price is the fact that its products are sold directly to the customers, through Direct-to-Customer model, eliminating middlemen at various levels of the supply chain.

Customers can buy the products either through Zlade’s website or can order the products through ecommerce marketplaces including Amazon and Flipkart. In fact, Zlade’s razors have consistently been among the top 10 best sellers on Amazon.

More recently, Zlade launched its offline retail stores in Goa and Mumbai and plans to open more stores by the end of this year.

“We are looking to raise our Series A round to support our distribution and brand-building efforts,” Suraj says.

The packaging is done locally in India at Zlade’s distribution centre in Pune. Zlade ships its products from Pune to different parts of the country. Zlade’s business model is based on the repeat sales of blades and shaves prep. “Our customers currently make two to three purchases every year,” Suraj says.

The repeat customer base is of almost 30,000 and based on the startup’s growth it is projected to add another one lakh unique customers by the end of this year. “Our repeat customers make two to three purchases each year and we are working on increasing our Customer Lifetime Value and Average Order Value from these customers,” he adds.

The shaving gel and aftershave is made in India. The startup is also working on a subscription model, where customers would be able to sign up for regular shipments and get the products delivered at their doorstep.

Time was when men’s grooming was limited to Brylcreem and Gillette. Today, the market is crowded with beard-care starter kits, activated charcoal face washes, hair wax to mooch wax, and the only-men creams.

According to an ASSOCHAM report published in 2018, the men’s grooming industry was valued at Rs 16,800 crore in 2018, and was expected to reach Rs 35,000 crore by 2021. Startups like the Bombay Shaving Company, The Man Company, and Letsshave, have been disrupting the online men’s grooming space in India. These startups are giving the top FMCG companies like Gillette, Park Avenue, Nivea, and Marico, a run for their money.

And Suraj believes that despite the competition, Zlade has a differentiator to offer. “We are offering quality shaving supplies at 50 percent lesser price. Thus, with Zlade we are making premium world-class razors accessible to our customers,” Suraj says.

The Himalayan yogi who knows his billions