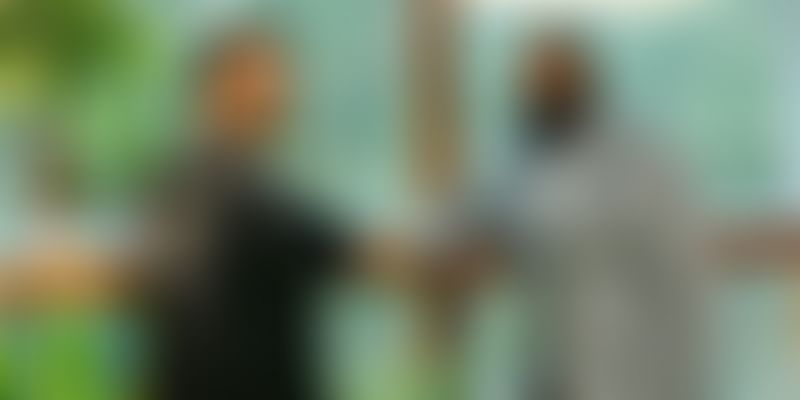 KidzByte is an app for young readers (Class IV-XII), that provides news, information, and knowledge on current affairs and world events with an innovative and kid-friendly approach.

Losing jobs does not treat bread earners very nicely, especially if they have kids. And the same dreaded thing happened with Chetan and his friend Swagat Salunke (28) when the company they were working for shut its operations all of a sudden.

While sitting idle, the duo decided to scratch their itch of starting up, rather than getting a new job and going back to the EMI-paying systematic life. They realised that kids were growing curious day-by-day and the screentime was becoming unavoidable. This was the inception of KidzByte in 2018.

KidzByte is an app for young readers (Class IV-XII), that provides news, information, and knowledge on current affairs, and world events, with an innovative and kid-friendly approach.

“One of the biggest challenges facing the news business is how to appeal to the younger audience. Kids would love to know what’s happening around the world, but adult news channels and websites can sometimes be scary, overwhelming, or even boring for children. News that children consume today is not curated, age-appropriate, and engaging enough,” says Chetan.

The app includes everyday news that is updated daily and is curated and written by startups’ in-house team, who scan through various publications to select the most suitable news items for children.

“Each piece is curated and simplified in a kid-friendly language. Our categories range from Career and Education, India and World News, Science to Sports,” he adds.

Since kids love streaming videos as well, the app also features an exclusive digital news channel for kids where animated characters in a newsroom set-up, read out news to children.

For knowledge-hungry kids, the app also has categories like Vocab Lab and Brain Train to help children with Spelling Bee contests, Logic exams, and GK-Olympiads.

A marketing and communications professional, Chetan, has over 16 years of corporate experience, holding senior-level positions across companies like NeoGrowth, Bank of America Merrill Lynch, CRISIL, and Atos.

At the time when Chetan met Swagat, the latter was leading the design and visual communications team at the company where the duo was working together. “We worked there for 2.5 years before the company operations paused, and this left both of us sitting idle,” tells Chetan.

They both individually decided not to go back to their previous lives with a steady job and a secured, planned life, and they convinced their families to take the plunge in the startup world.

The fathers of three-year-olds, however, knew well enough how their kids get attracted to little pocket gadgets, called the smartphone. And from there, the idea of KidzByte started to seep in the co-founders' minds.

“Today, kids are spending more time on screen, which has a profound impact on their social, emotional, cognitive, and physical development. Learning how to use media and technology wisely is an essential skill for life, and learning in the 21st century,” says Chetan.

Both decided to pursue the idea and started their research by speaking to principals, teachers, parents, and kids with ideas sketched on a paper. “We realised there was still some gap in the heavily cluttered educational world,” he says, claiming, the startup to be India’s first curated news and knowledge app for kids.

It took the co-founders six months to ideate, research, and conduct surveys to start-up, and the app was finally launched on the Google Play Store in July 2018.

To help kids read the news regularly and keep them engaged, the startup offers a gamified experience. “There is a quiz attached to every news piece, which helps the users collect points in their KidzByte piggy bank. They can then redeem the points to win exciting prizes via our platform,” adds Chetan.

Since its inception, the duo has expanded the team to eight people, with a six-member consultant team for kids-special news curation.

“We initially started by connecting with various schools across Mumbai and Delhi, educating students about our app and the value we add to each kid. We also promote the app digitally to parents PAN-India,” he says. Today, KidzByte has one lakh registered users on its platform.

KidzByte not only caters to the curiosity of kids to know the news, as well as current affairs but also helps them to explore the profession of a journalist.

“Recognition and reward systems work best with children. KidzByte has launched an exclusive Junior Journalist segment where news FOR KIDS, is created BY KIDS! With our new elite programme, kids get to experience what it’s like to be a professional journalist,” says Chetan.

The programme provides hands-on experience, mentoring sessions, writing workshops, features on the startup’s social media channels, participation certificate, and special KidzByte hampers. The top-performing kids even get a chance to report on local events, interview people, submit reviews on the latest movies, and much more, he adds.

With a population of 1.3 billion, India has close to 260 million children between the age group of 10 and 18 years. And, the startup believes that it has a large enough market in the country to capitalise on.

“Of these, there are close to 32 million school children from grade 4 to grade 12 in urban India with smartphone internet access. This industry is pegged at $4.5 billion,” Chetan says, quoting reports like Census India - 2011, Secondary Reports, and RedSeer Analysis.

Typically, KidzByte has three different audiences – kids who are the users, parents whose phones the children use, and educators who play the most important role as influencers.

KidzByte’s competitors are mostly in the print media space for kids and a few in the website space. “We are uniquely positioned as the first exclusive news app for children between the age group of 9 and 17 (grade 4 to 12),” Chetan adds.

So far, the app has clocked more than one lakh registered users, and it has sustained with the revenue it has earned from publishing paid content from kid-focused brands. The startup also launched a freemium version in December 2019 and is hoping to convert at least five percent of its existing base to annual subscribers.

According to Chetan’s estimates, an average tween today spends close to two hours on their phones/tablets. However, an average user spends about 15 mins daily on the KidzByte app.

The startup, at this stage, is focussed on gaining user traction and is working towards bagging bulk school subscriptions for its app. This will help the startup to generate a larger paying user base with a recurring revenue system. It is also focussing on generating revenue in the first half of this year.

In March 2019, KidzByte received a seed funding of Rs 2 crore from Pranay Goyal, Managing Director of The Goyal Group, and its group companies like Web Development, Dive-Bar, Eatery, as well as a Prysmato Operational Intelligence.

It is also looking at raising another round of funding later this year to expand its reach and strengthen its offering. Further, the startup plans to launch the app in Hindi and other vernacular languages to cater to kids across India.

The startup aims to empower kids, parents, and educators by providing unbiased and trustworthy information through innovative tools and an independent voice to harness the power of media and technology.

“We are on a mission to help children read daily by providing them with a healthy screen time option and become tomorrow’s responsible citizens,” concludes Chetan.