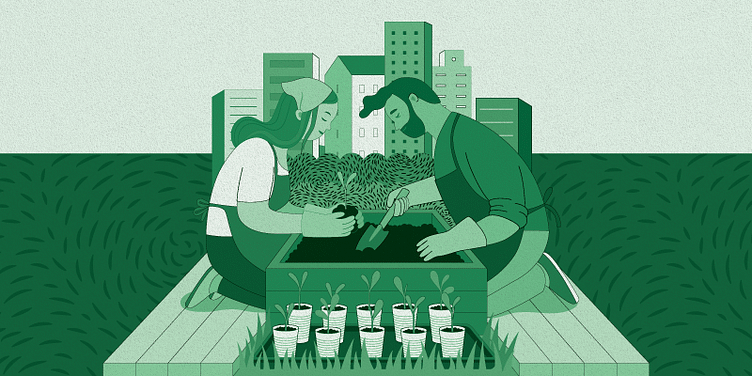 With new technologies like hydroponics and vertical farming, these startups are helping people grow produce in small urban spaces.

The Green Revolution in the 50s and 60s may have allowed our farmers to better their yields, but it also brought with it the evils of using pesticides and chemical fertilisers.

Over the years, they have been incorporated into conventional farming methods, bringing with them a host of problems. They are not only found to be toxic to humans by increasing the risk of getting cancers, but they also cause pollution, degradation of soil and water, and poison domestic animals.

Now, many farmers and urban-dwellers have switched to organic farming or urban farming. According to the International Federation of Organic Agriculture Movements (IFOAM),

“Organic agriculture is a production system that sustains the health of soils, ecosystems, and people. It relies on ecological processes, biodiversity, and cycles adapted to local conditions, rather than the use of inputs with adverse effects.”

Just a few years back, farming in cities would have been thought to be impossible. But new technologies like hydroponics and vertical farming have made growing produce in small urban spaces possible.

Here are six urban farming startups which are going the extra mile to bring sustainable farming practices in India:

Started by Linesh Narayan Pillai in 2017, Urban Green Fate (UGF) Farms converts unused spaces into live food gardens. Live food gardens are built in a way that they do no structural damage to buildings. The Mumbai-based startup sends residents microgreens (vegetable greens after they’ve produced first leaves) in pots, to grow them in organic coco peat as opposed to heavy soil. All a user needs to do is cut the greens from the live plant as and when they need them.

Further, UGF also helps to address issues of starvation, malnutrition, food contamination, and food insecurity by collaborating with schools as well as corporates that work for underprivileged communities as part of their CSR initiatives.

Since its inception, the startup has planted over 10,000 kg of microgreens. It has also educated 4,000 people over 150 workshops across multiple locations in Delhi and Mumbai about the importance of growing food in their home and going organic.

Back2basics is the brainchild of S Madhusudhan. Started in 2015, it is an organic farm spread across close to 200 acres around Bengaluru, producing high-quality organic fruits and vegetables.

Run by a father-daughter duo, Back2basics supplies produce to grocery chains, retailers, organic stores, and gated communities in Bengaluru. Its produce is also exported to organic food supply chains and retailers in other parts of the world.

The startup deals in more than 90 varieties of seasonal produce in four categories – fruits, vegetables, greens, and exotics. It has reserved almost three to four acres for customers who wish to visit the farm and try their hand out in agriculture.

It produces products that are 100 percent organic. The producer has full control over the colour and texture of the greens, making them healthier and tastier.

After returning from New York where he worked as a banker, Somveer Singh Anand, much like UGF Farms' Linesh, found it impossible to source organic food in India.

To address this concern, Somveer developed indoor hydroponic technology suitable for Indian climatic conditions and started Pindfresh in 2016 in Chandigarh. The startup sets up indoor and outdoor hydroponic plants for people who want to farm using the technology across India.

The lighting, humidity, and temperature are controlled all the time for these microgreens to grow. And to that effect, Pindfresh manufactures quality controlled pipes, lights, and all the necessary equipment required to set up a hydroponic plant.

These microgreens, which are about one to three inches tall, are mostly used to decorate and garnish food. They have concentrated nutrient levels that can be almost 40 times higher than the normal-sized produce.

The duo did thorough research by talking to various chefs to understand their requirements before venturing into the business.

Started in 2012 on a small terrace, the startup is currently farming on four acres of land, which it plans to expand to 10 acres.

Not many 24-year-olds would choose to ditch well-paying jobs and take up farming. But after paying a visit to Auroville in Puducherry in 2017, Mumbai-based Joshua Lewis and Sakina Rajkotwala were inspired by musician and organic farmer Krishna Mckenzie who started Solitude Farm with the aim of “honouring Mother Nature through local food.”

The duo got down to business with Herbivore Farms, Mumbai’s first hyperlocal, hydroponic farm. Today, the farm is spread across 1,000 sq ft and grows 2,500 plants. It sells fresh, organic vegetables to customers across Mumbai from its temperature-controlled indoor setting.

The vegetables are grown in a clean, sterile environment, with zero pesticides. As compared to conventional farming methods, the setup consumes up to 80 percent less water to grow the produce due to “recirculating irrigation system.”

Harvested vegetables are delivered to the customers’ homes within hours, maintaining their freshness, nutrition, and flavour.