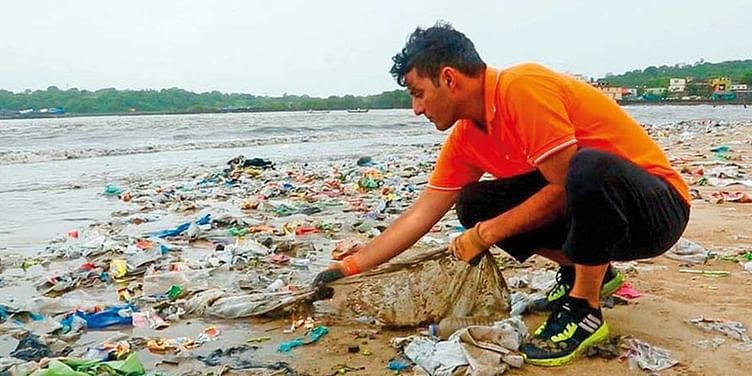 “I wanted to give people a sense of belonging,” says Afroz Shah - Lawyer, ocean lover, and UN Environment's Champion of the Earth– on helping orchestrate what went on to become the world’s largest beach cleanup project.

What does one do when confronted with a beach festering in ankle-deep filth from paper, plastic, and decomposing waste among others? Make a face, hold your nose, and walk on? Not if you’re Afroz Shah!

Afroz Shah is a young Indian lawyer from Mumbai, synonymous with the world’s largest beach clean-up project. He’s the man behind the clean-up of Mumbai’s Versova beach and was awarded the UN’s top environmental accolade – Champions of the Earth award in 2016 for his work.

For more than two years, Afroz has been leading volunteers in manually picking up rubbish from Versova beach and teaching sustainable waste practices to villagers and people living in slums along the coastline and the creeks leading into it.

How it all began: one piece of trash at a time

In October 2015, Afroz and his neighbour Harbansh Mathur, an 84-year-old, were frustrated with the piles of decomposing waste that had washed up and completely overwhelmed Versova beach. Determined to do something about it, the pair started cleaning up the beach themselves, one piece of trash at a time.

For the first six to eight weeks, nobody joined. One fine day, two men approached Afroz and asked to join him. That was when Afroz knew it was going to be a success.

Using the language of love - a date with the ocean

Afroz likens his passion for cleaning litter on the beach to a date, which anyone would love to go on. Being a lawyer, he could have opted for the legal route but he knew that it would be a long-drawn process, and in the end, might not serve the purpose at all. Afroz also thought of complaining to the Municipal Corporation.

Finally, in an unprecedented move, along with another resident of the same housing complex, he decided to clean the beach himself, saying, “We have to be the change ourselves. Why wait for others to do it? We have to believe that the solution lies with us.”

Afroz interprets the apathy from the public partially to a loss of a sense of belonging.

He adds, “You can have laws, policies, regulations in place, but if the community doesn’t have a sense of belonging, you can see what happens.”

Afroz, who believes in a one-on-one, hands-on, sleeves-rolled-up approach, rallied residents and fisherfolk by knocking on doors and explaining the damage marine litter causes. He now plans to expand his group’s operation to prevent litter from washing down the local creek and onto the beach. “My idea has always been to involve people in different ways so that we can handle litter at source,” he says.

The role of WhatsApp in the clean-up

Starting with just the duo, the movement has grown to see over 70,000 adults and 60,000 students (who clean in roster batches of 100) come together over three years to help rid the beach of trash. The scale-up of volunteers is largely due to Afroz’s efforts on social media, of which WhatsApp forms a key vehicle that is used across all denominations and social strata - particularly for communicating the dates, time and location of the cleanups. Regular shout-outs are required to ensure that volunteers come every weekend, and Afroz chooses Broadcast Lists as his favourite vehicle for communicating the details of the clean-up which then snowballs as recipients pass the message along via their own contacts and groups.

Every weekend, Afroz inspires volunteers to join him – from slum-dwellers to Bollywood stars, from corporates to citizen groups, from school children to politicians. They have been turning up at Versova for their ‘date with the ocean’.

Afroz also uses Whatsapp groups as a coordination tool with various core groups associated with the cleanups. These include the civic bodies, corporates and Extended Producer Responsibility (EPR) groups.

The inspiration catches on

Afroz’s work has inspired similar groups across India and beyond to launch their own clean-up movements. His work in Mumbai inspired another WhatsApp group consisting of former schoolmates to come together and clean. The group ‘Beach Please’ gathers every week, mostly on the weekends, to clean the stretch of beach around Chaitya Bhoomi, Shivaji Park, and have collected 40 tonnes of waste so far.

Adulation also followed from no less than the Prime Minister is his Mann ki Baat address.

From dump to turtle hatchery in two years

The biggest pay-off for the campaign came when Olive Ridley turtle hatchlings were spotted after the cleanup of Versova beach by Afroz Shah and volunteers. At least 80 Olive Ridley turtles made their way into the Arabian Sea from nests on the southern end of Versova beach, protected from wild dogs and birds of prey by volunteers who slept overnight in the sand to watch over them. Though they nest elsewhere in Mumbai, none had been sighted on Versova beach in decades, due to the acute pollution problem there.

He has also initiated cleanups for the coastline’s rubbish-choked mangrove forests, which act as a natural defence against storm surges.

What’s next for Afroz?

Afroz is deservedly proud of the Versova residents' accomplishments. Not only has the movement brought marine littler to the attention of decision-makers, it is also starting to win back the beach, with decreasing amounts of new litter appearing each month.

After the successful clean-up drive in Mumbai's Versova Beach, Afroz Shah has embarked on yet another mission to clean the city's longest river - Mithi. ﻿WhatsApp﻿continues to be an enabler of his efforts.