From Wuhan to Germany, this Bengaluru startup has found a way to teleport human expertise during coronavirus 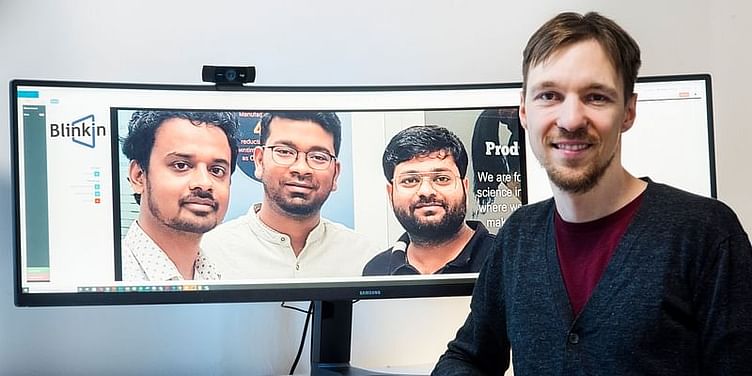 In times of COVID-19, Blinkin’s remote technology enables seamless transportation of human skills and experience anywhere in the world.

In February this year when the rest of the world was still blissfully ignoring the harm that the novel coronavirus was silently but surely unleashing, a young startup from Bengaluru was on a mission impossible in Wuhan in China.

Wuhan in China’s Hubei province, the epicentre of this vicious virus that has spread its tentacles in every corner of the world, was under a total lockdown. It’s newly-built Huoshenshan hospital, a 1,000-bed facility spread across 60,000 sqm with 30 ICUs, quarantine wards, and medical equipment rooms, was in need of continuous facilities management operations that included air conditioning, electricity supply, water supply, and other infrastructure.

﻿BlinkIn﻿with its remote technology ensured that a group of highly-efficient German engineers entered the Wuhan hospital from the comfort of their facility in Germany.

With the integration of emerging and exponential technologies such as AR and AI, Blinkin seamlessly transported human skills and experience to the exact location in the hospital in Wuhan to install ventilation systems.

Its technology enabled hand-holding experiences to its users where experts or a visual bot guided the local technicians using augmented visual annotations overlayed on their screen.

More than just a video calling tool, its visual bot feature is a virtual assistant like Alexa but with eyes. It can see and understand what it is looking at and can visually instruct users when needed.

Huber & Ranner, a Germany-based designer and manufacturer of air handling systems, is one of Blinkin’s earliest clients. It uses Blinkin to power its customer support service X-care, which played a very elemental role in the setup and maintenance of shipped ventilation units in Wuhan's hospital.

“Our platform enabled Huber & Ranner to seamlessly do the transfer of knowledge and skills across geographies,” says Dhiraj Choudhary, Co-founder of Blinkin, talking to YourStory.

“Technicians back in Germany were able to monitor the precise installation of the Air Handling Units (AHUs) in the Wuhan hospitals. In just five days, 16 hygienic weatherproof AHUs and 64 heating AHUs for Wuhan’s hospitals were delivered,” he adds.

Tech to the rescue in pandemic

Started in 2017 by Harshwardhan Kumar, Nitin Kumar, Dhiraj Choudhary, and Germany-based Co-founder Josef S, Blinkin is an Indo-German startup and has been developing remote tech solutions for several clients in Europe.

“We understand that someone's ability to physically experience or utilise their skills in another location is restricted by the barriers of time and distance. It is crucial to bring needed skills to people who need them and as urgently as they are required,” says Dhiraj.

The four co-founders put in their savings to prop Blinkin and have bootstrapped it along the way.

Incubated at Nasscom Centre of Excellence, Blinkin is active in 43 countries. Dhiraj says Blinkin’s computer vision, AI & AR SaaS products can be used by different industries and sectors such as insurance, consumer electronics, technology support, automobile, aviation, and manufacturing during the prevailing pandemic.

At present, Blinkin is working with Bengaluru-based Skanray Healthcare, which is manufacturing ventilators for COVID-19.

Blinkin offers two solutions. The first, Scotty, is an AI and AR-powered live video calling system. The agent is able to handhold users and guides them using augmented on-screen annotations and live pointers overlayed on their screen. The second, Huston, is an AI-powered self-service system powered by a virtual agent. This brings the expertise of senior engineers over smartphones.

The co-founders together bring years of experience building and running startups. They have been working with several SMEs in the past decade, have built several products, and have a synergistic combination of skills.

An alumnus of College of Engineering Bhubaneswar, Harshwardhan, CEO, was working as a software consultant for some of the major corporates across the globe and has a decade of experience in real-time technologies.

Dhiraj, the COO, is a postgraduate from XLRI Jamshedpur, and has founded and sold two companies Fabonix and LimBot (3D Printing and artificial limb manufacturing respectively). He brings marketing, financial, and operational skills and experience from his previous startups.

Nitin is the CTO and has co-created two startups with Harshwardhan before. As the CTO, he has developed several mission-critical technologies employed by a handful of heavily-funded startups.

Josef S is a serial entrepreneur and has about 10 years of experience as the consultant for strategy, innovation, and marketing to several SMEs in Germany. He has helped Blinkin penetrate and acquire most of its European customers. He is also a GINSEP ambassador, and has helped several startups both from India and Germany to navigate these economies.

With their rich experience and diverse background, these entrepreneurs have found the right opportunity to make a difference in the times of the pandemic crisis.