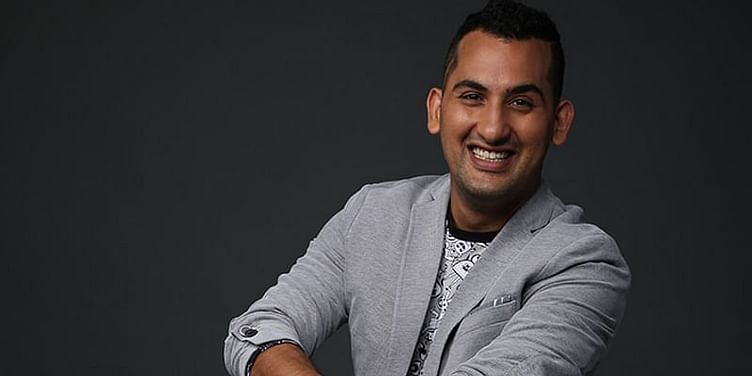 Using everyday objects as handsets and props, actor Danish Sait played out the numerous coronavirus lockdown conversations that people across the country were having with friends and family over their smartphones.

He couldn’t have asked for a more captive audience.

When actor Danish Sait started replaying his phone conversations with friends just a week into the first lockdown in the wake of the COVID-19 pandemic, little did he know he was unleashing viral content that would catapult him to the peak of the curve.

When the whole world, at least those privileged to have a comfortable couch and a good wifi connection, was sitting at home with only the bare essentials and glued to their phone screens for the better part of their waking hours, Danish Sait engineered a most charming coup.

Using everyday objects as handsets and props, Danish played out the numerous lockdown conversations that people across the country were having with their friends and family over their smartphones.

Whether it was learning about ‘atmanirbhar’ in Prime Minister’s speech before Lockdown 4.0 or discussing the ‘dhadaam’ sonic boom in Bangalore that shook Twitter, to resumption of domestic flights where flight attendant Priya mopped up a stylish hairdo, Danish’s minute-long improvisations of unique characters and different situations were fast, timely, and most importantly, made some, like me, roll on the floor laughing.

Such has been the virality of his content over Twitter and Instagram that people are posting quizzes about their favourite props and characters on social media. And by far the most popular character has been the good-for-nothing Bevarsi Kudka. Danish’s version of ‘vocal for local’, perhaps!

Just two days before the lockdown was announced, Danish was meant to fly to Mumbai to be with his sister Kubra Sait, herself a well-known actor. The fact that he was alone the whole time allowed him to be on the phone, having a dozen-odd conversations with his friends.

“And I realised all the conversations were about the same things,” Danish tells me in a talk we had last week over a video call. ‘Dude, this corona,’ ‘Macha, what da, this lockdown’ -- everyone from the posh lady of the house to the household help were pretty much discussing the same things."

You know when something is a big success? When marketers come calling for product placements. And Danish by all means has accomplished that milestone.

A wise person on Twitter said, ‘Success comes slowly. Then all at once.’

“When success is delayed, people become bitter. I am only 32, which I think is pretty young, and to have that love and appreciation from all parts of the country is overwhelming and at the same time humbling,” Danish says.

For Danish, success could not have come at a more opportune time. A new web series on Amazon Prime based on his hit Kannada movie, Humble Politician Nograj, is all set to be out soon. His RCB Insider with Mr Nags is very popular. “In the past two years, different people have come along with me on this journey, and the snowball gets bigger and bigger,” he says.

To begin with, Danish always wanted to be an actor. To have the spotlight on him. “Today, with time, I am clearer of what I want. I want to act, write content, and eventually, make films,” he says.

In our conversation, he not only talks about the genesis of his popular one-minute lockdown feat, but also goes back in time to talk about the early days of his struggle.

“I know people like to romanticise their struggles, but I feel like I’ve gone through a process of polishing all these years that a rough-cut diamond goes through to shine.”

Danish’s first-ever episode where he got to hold a mike in public was when he was around 14 years old. “It was my first-ever event. I was on a float that was moving around the city, publicising Shah Rukh Khan’s Temptations Tour. It was a summer job and I was probably paid Rs 200 for a week,” Danish recalls.

After his Class 12, when Danish decided not to appear for the common entrance test, his early childhood hero and mentor, his school principal Prof Nanjunda, had told his mother, “He is more likely to succeed as a creative person than as an engineer or a doctor. There are enough of those that we will produce, but the world will also need entertainers like him.”

And nothing could have been as prophetic. This global pandemic has shown the true value of art and literature.

For someone who works in the most unpredictable of all fields, Danish is a self-confessed disciplinarian and an eager learner. From keeping his eyes and ears open at all times to learning from people he admires, Danish always has the pulse on what makes people happy and entertained.

It is important to keep learning, he says, which is what starts fuelling everything. “There is no formula to becoming a great comic, a writer, or an actor,” he cautions. He says the only way is to put your work out there. It doesn’t matter how good or bad it is. Unless you try it out, you will never know what works and what doesn’t.

“Most people are afraid to fail. Mistakes are lovely because you learn from them.”

Among Danish’s heroes, the first three are his mother, sister Kubra, and his school principal Prof Nanjunda. “I have learnt the art of survival from my mother. Today, even if you were to take away everything from me, I will be able to rebuild from scratch,” he says.

Having battled depression, Danish says difficulties sometimes bring out the best in a person. He talks about his early broken home life and how he and his sister would deal with the resultant hardships by enacting different people.

“One way to forget who we were and where we came from was to become someone else. Suddenly, we would become the centre of attention from being sidelined at home.”

It is these life experiences that make Danish connect with a mass audience the only way he can. And lockdown or no lockdown, he will continue to hold them captive.