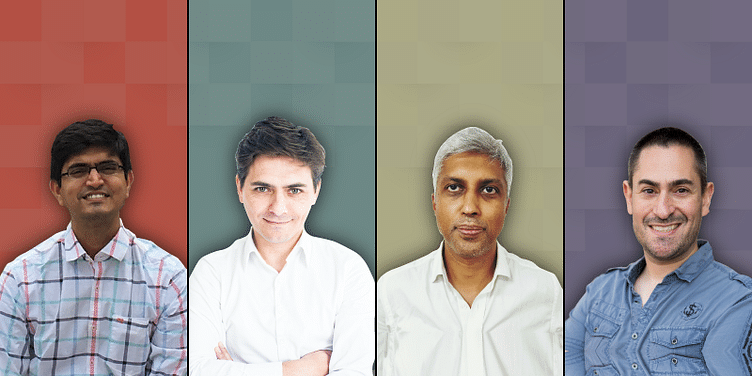 Headquartered out of Singapore, Mozark is an AI-based platform that helps enterprises and business owners monitor their networks across their branch office, buildings, and spaces from a single centralised console.

The microblogging social media platform Twitter has said that its employees can now work from home, not just for the period of the lockdown but for the foreseeable future. Many startups are looking to limit their office space and are enabling their employees to work from home.

However, for this to work effectively, there needs to be greater connectivity provided by a single platform to its customers. It led Kartik Raja, Fabien Renaudineau, Chandra Ramamoorthy, and Thierry Moncorger to launch Mozark in February 2019.

The platform helps enterprises and business owners monitor their networks across their branch office, buildings, and spaces from a single centralised console.

Speaking of why they chose to start up, Chandra says, “As connectivity technology improves, so does the value of services delivered online. From purely voice calls in the 2G world, today connectivity is able to support new business models. As this has evolved, so has the cost of connectivity failure. And 5G will only accentuate this trend further.”

He adds that now with the COVID-19 crisis, the world is strongly feeling the need for high-quality connectivity.

Why the need for such a platform?

"Mozark’s tools are positioned to help various stakeholders whether it is connectivity providers such as telecom operators or consumers such as apps to measure and diagnose the quality of their services under various connectivity conditions,” he says.

The team at Mozakr believes connectivity to be a critical element today that every stakeholder – whether it is the network provider, the CDN/Cloud service provider, or the app developer – will take interest in.

The problem is that none of the providers collaborates with one another as they operate in silos, optimising for experience separately.

“Our approach has to been to create visibility for each stakeholder across the ecosystem and provide real-time intelligence so that they can take decisions based on how the others are working, thus delivering the best experience to the customer,” says Chandra.

For example, just like how an application should be able to choose the network provider such as the CDN or even the last mile network based on their performance, similarly, a network provider should be able to optimise itself to delivery the quality of experience that is just right for the application that the user is using at the moment rather than delivering a uniform experience all the time to all users.

Mozark brings in technology platforms that make delivery of these services extremely efficient and as automated as possible. The team works on solving this in different ways – like building a highly flexible analytics platform for connectivity assurance, an application performance monitoring platform that eliminates the need for SDK, and long backend integrations.

“What we realised very early on is that many of our target customers were very inward-focused. Pretty much all of them had invested in several tools that would cost them millions of dollars to measure their own performance. However, despite all this they missed one key perspective, where do they stand relative to others and how much of an improvement is possible? We realised a relativistic “outside in” view is essential for our customers to understand that there are opportunities to make large jumps rather than just focus on month-on-month improvements,” says Kartik.

The team and the technology

The entire founding team comes with several years of experience in the area of assurance. Kartik, for example, spent several years at various companies such as Motorola selling assurance products. Chandra was heading the Network Experience function at Airtel, and Fabien and Thierry have a long history of providing assurance services to clients in France.

Kartik and Fabien met each other to create a joint pitch to a client in Egypt back in 2015. Their personal and professional friendship steadily grew over the years. The simple business collaboration turned into a JV which later became a complete merger between their respective companies Phimetrics and QoSI.

Chandra met Kartik back in 2016 when he took over the role of Head of the Network experience at Airtel.

The technology works in a completely non-intrusive manner. Since the approach is largely outside in, the products don’t need deep integrations into the ecosystems of the provider or the consumer.

“To achieve this, we use technologies such as software bots, deep packet inspection, video and audio analytics to make it completely automated. Our tests can be run on our own global device cloud or that of the customers. Here devices don’t just refer to smartphones but could be TVs, set-top boxes or any other IoT device. For example, our application assurance platform works without any SDK integration or code change whatsoever. Thus, our deployment timelines are in minutes,” says Chandra.

There are two stages in which clients buy the product – one is pre-release/launch and the other post-launch monitoring and care. The former could be pre-launch of an app, a network site, or a new CDN node.

The post-launch monitoring is supported by running continuously on theirs or the customer’s global device cloud. The devices could be smartphones, set-top boxes, or any other IoT device.

The company has so far raised nearly $10 million from angels and financial investors. Their first institutional investment was from Kalaari capital. The funds are primarily used for product development and also in market expansion across Europe, Middle-East, South-East Asia, and the US.

While the company hasn’t disclosed the revenues or how much they charge the clients, the team adds that they work on B2B-based subscription model and are seeing a double-digit growth year-on-year. They added that they work several marquee clients such as SNCF (French railways), Carrefour, SonyLIV, and all the major telecom operators in the region.

Mozark team believes that it operates in a space that has a target addressable market of nearly $40 billion. However, a large part of this market is services offered by large network equipment manufacturers and systems integrators. Some of the others in the space include Xamarin, Applicaster, thePlatform, Appurify, and Bitbar.

Speaking of their future plans, Kartik says, “Our target is to continue doubling our revenue every year by entering newer markets. For the next year, the US is the primary market we plan to enter along with consolidating our position in the markets we operate in. Our investments in product and our platform would continue.”