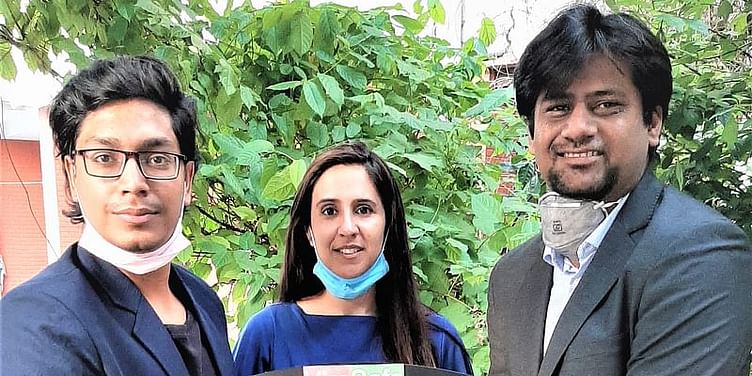 Power8 is an IoT and AI platform focussed on optimising utility bills for commercial buildings and industrial complexes and helps in reduction of power consumption.

For 27-year-old Abhinav Saxena, environmental pollution and climate change have always been things he has been passionate about. It even drove him to work on a project during his masters at the University of California, Berkeley.

“The layers of the atmosphere are flooded with aerosol and carbon black from the stratosphere to the ionosphere. Launching of weather balloons during my research at the University of California, Berkeley, motivated me to devise ways to reduce air pollution,” says Abhinav.

Another chord struck when he came back home to Delhi, especially during Diwali. The pollution recorded in the city and the country made him take note of the wastages in terms of the electrical consumption by the buildings and industries.

Abhinav came up with the idea to enable remote monitoring of electricity in buildings through IoT sensors. This could help in understanding the thermal dynamics of the building with respect to the weather outside. So, in March 2019, he set up ﻿Power8﻿ in Delhi-NCR.

Power8 is an IoT and AI platform focussed on optimising utility bills. “We help commercial buildings/industrial complexes reduce their power consumption by 25 percent every month by deploying AI on IoT systems,” says Abhinav.

Abhinav met Gaurav Kansal when they were working together on a consulting project with an Oil and Natural Gas client where they were streamlining the data pipeline and deploying AI to predict the quality of the byproduct produced during the refining process.

They got into further discussion on how IoT and AI can be used together on buildings. Later Gaurav, 26, joined as CTO. Gaurav is a computer science graduate with certifications in AI and has worked with Infosys and Gartner with over four years of IT experience during which he deployed AI on various use cases.

This intelligent box can make your office energy efficient, cuts down power bills by 20pc

In view of the current coronavirus pandemic, the team has developed UVGI technology, which can kill SARS COVID-19. “We are trying to help the government and businesses fight for the same cause,” says Abhinav.

They have built Viro-Safe, which sterilises grocery items, food items, or any object in order to stop the transmission through surfaces which can be homes, FMCG, or offices.

The duo has also built Viro8, which sanitises centrally air-conditioned buildings with AHU, HVAC’s like offices and hospitals, in order to stop the transmission through the air.

The technology has been approved by ASHRAE, ISHRAE, REHVA and has been recommended by the World Health Organisation (WHO). It has been adopted by various countries like China, Singapore, and South Korea who have been successful in limiting the spread of SARS coronavirus.

“We are already in talks with state governments to allow us to manufacture on a large scale and run a crowdfunding campaign for Viro-Safe overseas,” adds Abhinav.

It took time for the team to reach out to clients and make them realise the importance of IoT sensors and data. It also took time for them to adapt to the auto-cooling solution with limited controls. The sales cycle continued to increase by two to four months as the solution was hardware intensive. The team also faced challenges with the business models which were iterated a couple of times with a lot of thought and market responses.

“Currently, we are amid extraordinary conditions of lockdown and are developing a prototype. However, moving it to a manufacturing phase is very difficult,” adds Abhinav.

They launched their product in August 2019 which has since then been in the market. They have been able to make $180,000 till date with clients in retail, hotel, mall, and movie theatre space.

“We recently bagged an order for pan-India stores of a retail customer where we have been able to show at least 17 percent savings per month. We are scaling rapidly and are looking for opportunities overseas for which we have already created channels in Singapore, Canada, and UAE,” says Abhinav.

The IoT gathers data which reveals thermal dynamics of the building and uses it as a feed to optimise the systems and temperature is provided using AI.

Power8 comprises Mesh of sensor network communicating OTA (Over The Air) data to perform the following:

Visualisation: Visualise more than your consumption.

Operations: Data-driven, monitored commissioning, and building management. Operate HVAC at lower cost and save power bills up to 25 percent.

Predictive Control: Autonomous, intelligent control through machine learning models of the platform enables to learn about the building, empower the staff, and control the HVAC costs.

Energy savings are the order of the day. Using AI and Internet of Things (IoT), companies are able to eliminate 40 percent of their monthly energy consumption costs. An average C&I company spends Rs 2 crore on energy consumption in a month. There is Blume Ventures-backed Zinnov, US-based PetaSense, and 75F.

While they refused to share the exact pricing, the Power8 team follows two revenue models, one Opex, where they charge the client per sqft, and Capex model where the client pays for hardware and they charge 30 percent of savings, which is generally fixed.

Client base and future plans

“Our key clients are in the space of retail, hotel chains, movie theatres, and office space. We barely make margins on hardware. We earn profits on SAAS which are usually around 70 percent. We enter into legal contracts with a customer for about three to five years,” adds Abhinav.

The team had raised an undisclosed angel round from Stockbay Partners - Nishish Jha (Unigrowth, Ex CSA Mahindra) in May 2019 and are looking to raise Pre Series A soon for rapid expansion in Singapore and Canada due to the early traction in the demography.

“Our mission is to keep buildings clean, green, and smart by enabling the use of AI-IoT platform. We aim to make the product more robust, establish footprints in Singapore, Canada, and the Middle East, explore Carbon Credits with government, and OEM Partnership with HVAC manufacturers,” says Abhinav.