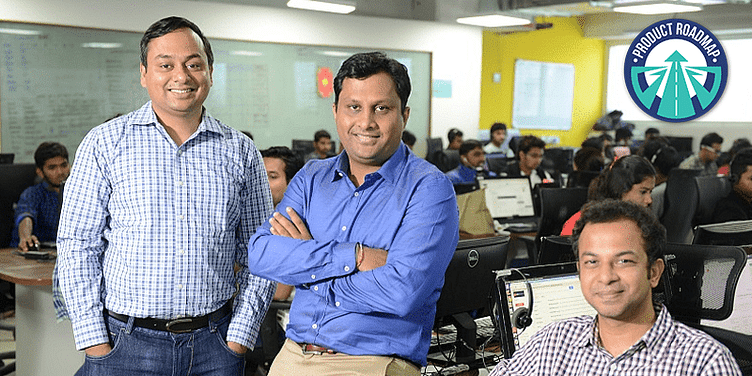 A product roadmap clarifies the why, what, and how behind what a tech startup is building. This week, we take a closer look at real estate startup NoBroker, and how it has evolved into an end-to-end platform to solve consumer needs.

They often wondered why brokers charged high commissions for simply connecting two people. This problem was augmented in cities like Mumbai, where a broker routinely charged brokerage for renewing an agreement with the same landlord.

Apart from the information asymmetry, they also noted that brokers often created artificial scarcity to push parties to close the transaction.

Their personal experiences led the trio, who had known each other for close to two decades, to start tech-driven real estate startup ﻿NoBroker﻿ in 2014.

The Bengaluru-based startup raised $30 million in April this year as part of its Series D funding round, led by Singapore-based private equity firm General Atlantic. General Atlantic had invested $51 million in NoBroker’s Series C round in June 2019. Four months later, it participated in another Series D funding round of $50 million, led by Tiger Global.

But how did NoBroker get to where it is now?

The platform’s first MVP completed towards the end of 2013 and launched in March 2014. It was a very basic website, built using a simple MVC framework with no distributed architecture, microservices, caching, and complex search.

“It was built by me single-handedly within three to four months as we were bootstrapping. In fact, we didn’t hire any resource until the middle of 2015,” Akhil says.

NoBroker upgraded soon after the founders received their Series A funding from SAIF Partners. The team then started working on an Android app, which was launched in less than two months of them setting up an office.

“Once we started getting more traffic on the website, we started to revamp the architecture and moved toward microservices with caching and distributed architecture, and also re-wrote our mobile website using the latest technologies,” Akhil says.

The entire premise of NoBroker products is based on customer feedback. The team’s focus is on building something customers would require.

“Once customers finalise a property, they would need help with rent agreements, so our team facilitates that. They would need to shift, so we started packers and mover services.”

The team also launched NoBroker Pay, through which customers can pay monthly rent via UPI, wallets, net banking, and even credit cards.

“Given the current situation, many tenants are struggling with a liquidity crunch. So, we partnered with HDFC’s PayZapp to make rent payment more rewarding for our customers,” Akhil adds.

NoBroker’s visitor management app NoBrokerHood recently tied up with ITC and ﻿Bigbasket﻿ to help consumers avail essential needs from the comfort of their homes so that they don’t have to step out.

The grocery store on the app went live in record time. “We try to take minimum time to reach our customers for anything they might need,” he says.

The need to build a strong tech

Akhil explains that technology was essential for NoBroker, as they did not have a feet-on-the street model.

All customer problems are solved using technology. For instance, when someone is looking for a property, the team uses algorithms to find the property best suited to the needs of the user, based on the travel time (including traffic condition) that triangulates the best area between the office, school, and their spouse’s office.

“Also, while closing a deal, people need to know the right price of the property. As ours is a data-driven transaction platform and not just a discovery platform, we have a lot of property data from closures. We use this data to predict the right rent of a property basis size, locality, BHK, time to close the property, etc., which is extremely useful for our customers,” Akhil says.

The first version of the product built by Akhil still exists in bits and pieces in their current tech stack. “We always focussed on user experience; even the PMF version of the website was built with that in mind and was appreciated by users. We were able to do a much better job once we had UX and UI experts working full time with us. Our current website is appreciated for its easy and simple-to-use interactive design,” Akhil says.

He adds that they introduced a sophisticated search to let people look for properties. The travel time search feature allows people to choose a property best suited to their needs.

NoBroker enabled complete automation, including checking non-relevant properties. People usually also want to know how far points of interest will be, which is why the product tags popular places within the property’s vicinity.

The NoBroker team worked to help customers narrow down their searches based on multiple factors/requirements.

Explaining why they chose to build an app when most real-estate players didn’t, Akhil says, “Early in the game, we realised that a mobile app would be a game-changer, given the way internet and smartphone penetration were increasing. At that time, many real estate websites were averse to the idea of a real estate mobile app as it was thought that real estate was a one-time transaction and a user would not download an app for something they needed once in six to 11 months. But our gut was right.”

“Users like choosing things on the go, even homes. As of 2020, we have less than 20 percent of traffic on desktop. Majority of traffic is on the mobile app, which we built keeping user convenience and mobility in mind.”

But ensuring different hacks and a strong reliance on technology also meant breaking away from the norm. The team of now over a 100 began its journey with one cloud provider, which they let go completely for a better cloud provider after 2015.

Hacking their way ahead

Akhil says mobile MVC frameworks were “pretty naïve” in 2015 and the framework they chose in 2015 (it was best for that time) could not cope with current times. So, they decided to rewrite their mobile website (still work in progress as we keep updating it) for a better and the latest tech stack.

Coming up with different hacks and features that caught the eye of the consumer also helped NoBroker scale. One of these was Click and Earn, which Akhil calls their “best growth hack so far”.

“Anyone who sees a to-let board anywhere can click a picture and submit. NoBroker rewards them with cash in their ﻿Paytm﻿. A lot of delivery fleet and regular people have helped us increase listings on the platform this way. It is a very low-cost initiative,” he says.

NoBroker also uses WhatsApp to reach out to customers and automate the property photo process to reduce the time taken for a property to go live.

The team uses ML to generate beautiful property descriptions instead of burdening owners to write them. The descriptions are very detailed, and include information on nearby schools, hospitals, and other places. ML is also used for image recognition to weed out irrelevant images shared by owners.

The startup has also enabled missed call and tenant/owner calling cards on the app to increase the call pickup rates.

Today, there are more than 60,000 real estate companies in India, according to the Confederation of Real Estate Developers Association of India (Credai). India Brand Equity Foundation (IBEF) pegs the real estate industry to be a $250 billion opportunity in India.

Some of the startups in the space include Brick by Brick, ﻿Magicbricks﻿, ﻿Housing.com﻿, and others.

More than 35 lakh properties are already registered on NoBroker and more than 85 lakh individuals have used its services. The company claims that more than 75,000 new listings are being added every month on its platform and that it is currently adding more than 350,000 new users every month.

Technology has helped NoBroker stand out in the real estate market.