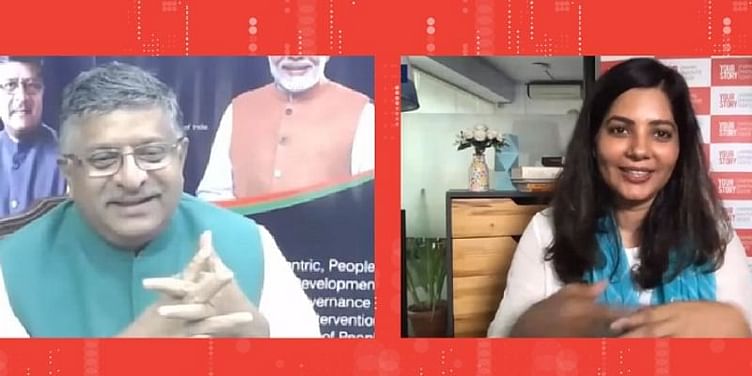 Union IT Minister Ravi Shankar Prasad emphasised the importance of allowing and helping India's indigenous industries to thrive and succeed.

As India entered the fifth year of its Digital India initiative, with a digital population of more than 600 million, YourStory Founder and CEO Shradha Sharma hosted an exclusive #DigitalIndiaTownhall for Indian entrepreneurs with the Minister on Wednesday, July 1.

In the wake of the COVID-19 pandemic and the ensuring crisis, Prime Minister Narendra Modi has emphasised the need for India to become an 'Aatmanirbhar Bharat', or self-reliant India, where products are Made in India for the world and a nation that is not dependent on others in strategic sectors.

At the virtual town hall, which included Paytm Founder and CEO Vijay Shekhar Sharma, InMobi CEO Naveen Tewari, and Udaan Co-founder Sujeet Kumar, Ravi Shankar Prasad said, a resurgent India is possible only when India makes the most of its talent and its creativity.

Having said that, the minister clarified that while adopting the ideas of Aatmanirbhar Bharat, the Indian government does not go against, or have a problem with Foreign Direct Investments (FDI).

He also emphasised the importance of allowing and helping indigenous industries to thrive and succeed.

"Why should India export from international markets things that are already available?" he asked, stating the examples of the Indian handloom industry, the toy industry, and the firecrackers industries.

He further added that with the kind of ecommerce and digital payment startups that are developing and rising in India, Indian companies have the "innate potential to become a component of the global world."

As India enters the fifth year of its Digital India initiative, the country is now ranked as the world's second-largest online market.