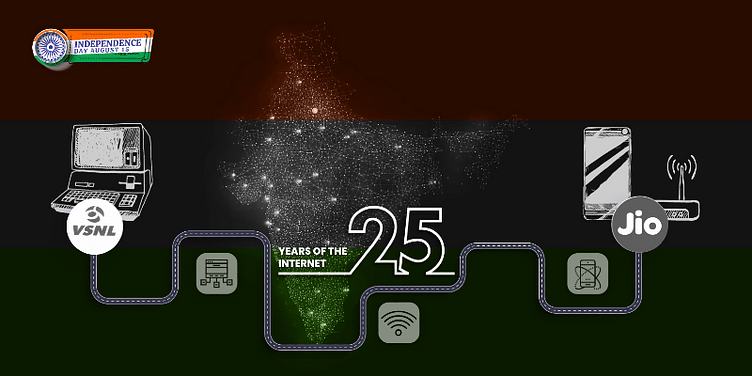 The public internet launched in India on this day in 1995. A quarter-century later, the country is home to the world’s second-largest internet population. Take a trip down the memory lane of India's connectivity journey.

The internet arrived in India in the late 80s, but was restricted to the educational and research community only.

On August 15, 1995, the public internet saw the light of day when the government-owned Videsh Sanchar Nigam Limited (VSNL) launched the Gateway Internet Access Service. It gave the average Indian their first taste of the World Wide Web.

Most of our first memories of the internet would be VSNL’s signature dial-up tune and the rather frequent disconnections.

The first dial-up line offered a speed of 9.6 kbps and was priced at a whopping Rs 5,000 for 250 hours for individuals, and Rs 15,000 or above for commercial users. Twenty-five years on, India has the world’s second-largest internet population and the cheapest data rates (with 1GB costing Rs 5 on Jio's 4G network).

The quarter-century journey from VSNL to Jio saw India surge ahead of even developed nations like the US, the UK, Japan, and South Korea that were using the internet long before us.

Today, our total active internet user base is estimated to be 574 million, and is poised to reach 639 million by the end of 2020, according to Kantar. The World Economic Forum (WEF) projects 1.1 billion Indians will have access to the internet by 2030.

The country’s phenomenal growth in the ‘connected’ world has been driven by a vibrant young population, an increasingly open economy, a flurry of government initiatives, rising consumer spending, and the far-reaching vision of our entrepreneurs.

India made its first mobile phone call in July 1995. Two decades on, it went on to cross one billion mobile connections. In 2019, it also went past the US to become the world’s second-largest smartphone market, as per Counterpoint Research.

Today, the country is at the forefront of every technology giant's global operations. India is the biggest market for social media giant Facebook and its messaging platform WhatsApp, the fastest-growing territory for tech majors Amazon and Google, and the top user base for YouTube and Android, and so on.

India’s internet journey in the last 25 years can be grouped into four phases. YourStory drew up a timeline of events across each phase.

The initial 10 years of the public internet or the pre-broadband era were marked by exorbitant data packages, cyber cafes, messenger chat rooms, and first email ids.

The government's broadband policy marked the first accelerated growth phase in internet connectivity in the country.

This phase was also marked by the launch of global tech majors in India. Very soon, we would go on to be a prominent market for each.

This period was defined by the growth of internet-enabled mobiles (smartphones) in the country. It also saw the rollout of the first 4G network by Airtel.

This was the phase when the internet went mainstream in India.

India's wealthiest businessman Mukesh Ambani launched a low-cost 4G network in late-2016 with the goal of democratising internet access for a billion-plus people.

The Jio launch turned out to be a watershed event in India's connectivity landscape — now classified into pre-Jio and post-Jio phases. A May 2017 headline in Fast Company declared: ‘Internet growth is slowing everywhere, except in India’.

That a nation of farmers — more than 60 percent of the population's livelihoods depend on agriculture — could become the nerve-centre of the technology world is nothing short of extraordinary.

And we aren’t done yet.

The next phase of India’s mobile and internet growth is coming from rural areas. In 2019, rural internet users (277 million) outnumbered urban ones (227 million), and smaller towns are adding new users at an exponential rate, according to IAMAI.

By 2025, India is projected to have over 850 million internet users, which is more than the combined population of the G-7 countries, according to BCG. India's data consumption is likely to touch 25GB per month per user by 2025, as per Ericsson Mobility Report 2020.

To sum up in the words of a WEF report, "Online connectivity, and the resultant access to information, is proving to be a key driver of differences in aspiration and the desire to spend and upgrade consumption... As a vast majority of India is connected over the next decade, this pattern will become a driver of overall consumption growth.”