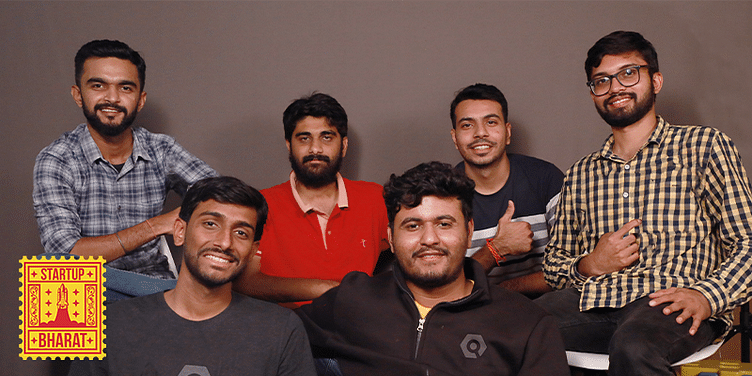 Iconscount is a bootstrapped design resource marketplace that offers ready-to-use high-quality icons, illustrations, etc. The startup currently has around 200,000 plus registered users

During his college days, Dalpat Prajapati would design icons as part of his college project at Sarvajanik College of Engineering and Technology in Surat. While doing research, he found there was no marketplace that sold micro stocks like icons, which was vital for visual communication.

“Emojis had just started rising at that time, and the use of icons in the form of visual languages was increasing. It made me think of building a global dictionary of visual language with amazing features sets, which can cover larger use cases, which nobody has done,” says Dalpat.

Dalpat got along with his college mates Mohit Gandhi and Varun Trivedi and started Iconscout in 2015. His other batchmates Arpan Rank, Jemis Mali, and Tarun Mangukiya soon joined in as co-founders.

Based out of Surat, Gujarat, and now in Bengaluru, Iconscout is a design resource marketplace that offers ready-to-use high-quality icons, illustrations, and photos.

The startup is powered by a community of passionate designers and photographers. According to the startup, at present, people from over 150 countries are purchasing from its library of over two million icons, illustrations, and stock photos for their businesses.

Dalpat says he has also helped design the Sahamati App, an account aggregator app, in iSprit as a product design volunteer.

“As a startup, there were various challenges we had to face in the beginning. We were starting up from scratch, and so the basic things that needed to be taken care of were the mindset of the team, building a network and community, and some money to keep floating,” says Dalpat.

Initially, Iconscout was started as a design studio, which provided different design services like logo design, web design, UI design, and so on.  Dalpat says, they were fortunate to get associated with companies like ﻿Uber﻿, Hackster, ﻿Exotel﻿, ﻿Headout﻿, KTM, etc., in their first year.

“Earning from the design studio turned out to be a good source of revenue, and it helped us get enough capital to set up computers and a small office in Surat. As we grew, we decided to shift our entire focus on our product,” says Dalpat.

In August 2016, the team realised it would be difficult to scale the product from Surat, and hence they moved to Bengaluru.

Here’s why skill development must translate into entrepreneurial training

The creator uploads the assets on the platform, and the content curator team checks the quality of each asset uploaded. Only approved assets are available for users to download. Users can then download the assets from the website or from plugins and app.

“We also provide an Iconscout API, which any business can incorporate into their existing applications. This will help users in creating their website, app, or videos using Iconscout assets right inside those tools,” says Dalpat.

The startup has around 200,000 plus registered users, and the app and plugins have seen around 500,000 installs. “We have a community of 1,500+ designers and photographers from around the world who have contributed to more than two million+ design resources on the platform,” says Dalpat.

At present, startups like TechStars-backed Picxy are solving the relatability problem in the digital content space through highly contextual stock photos.  According to IndianRetailer.com, the niche ecommerce market along with gifting market places in India is currently pegged at $30 billion, of which $400 million could be attributed to the digital space.

Speaking of the differentiator, Dalpat says, Iconscout’s fast access sets it apart from its competitors.

“With our plugins and apps, users can get all the design resources 5X faster than usual. The major advantage with this ecosystem is that users don't have to leave their workspace and can access millions of resources right inside their tools. Everything is available inside the tool they’re working on, thus making the process much efficient and fast for our users,” says Dalpat.

The startup says it is looking at different revenue models. There is the ‘pay as you go’, where every asset is priced by the designer, and users pay the pre-set price for every asset they download.

In the ‘subscription model’, the user can purchase a monthly or yearly plan, which gives them access to various resources depending on the package they have selected. The price of these packages can range from $9 to $3000/ per month.

The team receives a commission of 40 percent and 60 percent on the sale of each item, based on the asset type. Dalpat says, “We have generated $500,000 revenue till date.”

The clients and future

Iconscout currently works with the likes of Unilever, Sony, Oracle, Infosys, and Urban Company. “For the majority of our journey, we have been bootstrapped. We received our first non-equity grant from Adobe in 2018 under their programme Adobe fund for Design.

In early 2019, we received a grant from InVisionApp Inc. under their Design Forward Fund. In the same year, we received another grant from Adobe. This makes us the first company in the world to receive grants from both these companies,” says Dalpat.

The platform is currently focussing on Indian digital content, and is also looking to create a strong design community worldwide. Dalpat says, they are bringing more world class artists on the platform and creating a large database of assets.

In future, Iconscout aims to focus on strong icons, illustrations, and stock photos API for all its assets, which can be a part of other applications, making it much efficient for users. The startup also wants to launch custom sticker API, and is working on another product called ‘Poster’, which is a regional language-based graphic editor.

“We are working to create a community of Indian designers and photographers who can fulfil the creative needs of our country. From a technology perspective, we are also going to introduce copyright and licensing of creative assets on Blockchain. We are targeting a revenue of $1 million by 2021,” says Dalpat.