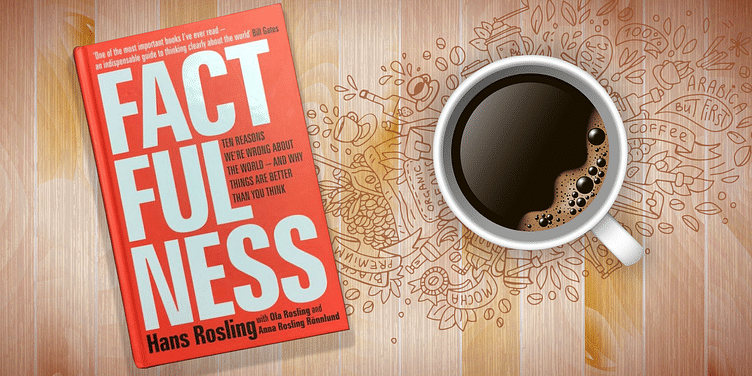 In their book 'Factfulness: Ten Reasons We’re Wrong About the World — and Why Things Are Better Than You Think'; by Hans Rosling, Ola Rosling, Anna Rosling Rönnlund, the authors talk about how our instincts can shape our perceptions.

We live in an increasingly chaotic world. While living amidst a pandemic, and seeing political, social, and economic unrest, it often becomes increasingly hard to separate fact from fiction. To attest this, Hans Rosling, Ola Rosling, and Anna Rosling Rönnlund in their book Factfulness analysed trends and data to see if the world is chaotic or not.

Though the book, the authors explain that the 10 different human instincts which play an important role in survival can be responsible for distorting facts. For entrepreneurs and founders as well, the world may seem increasingly chaotic. The resolution can be achieved by looking within and analysing the different instincts and the roles they may play.

This is the typical ‘us’ versus ‘them’ instinct. It is human nature to divide things into distinct and possibly opposing groups, and try to project some gap between them. One of the examples the authors take in the book Factfulness is the ‘developed’ world versus the ‘developing’ world.

Data shows that close to 85 percent of today’s world falls under the ‘developed’ world category. They used data to show that several low-income countries are significantly more developed than what is perceived.

The authors explain that today the world is more complex than just a ‘developed’ versus ‘developing’ concept. It there is better to understand the world through the distribution of data on a bell curve than just opposing polarity.

Any ‘us’ versus ‘them’ polarisation creates a split and, in turn, affects our actions and behaviour. This holds true for teams versus management, or leaders versus employees as well.

The need for survival has created the need to look at threats versus opportunities and the tendency to notice the negatives over the positives. This could entail believing things are getting worse than they actually are.

As the authors say, “Does saying ‘things are improving’ imply that everything is fine, and we should all relax and not worry? No, not at all. Is it helpful to have to choose between bad and improving? Definitely not. It’s both. It’s both bad and better. Better, and bad, at the same time. That is how we must think about the current state of the world.”

While we are biologically conditioned to look at the negatives to recognise danger, this instinct can also create a bias towards things being worse than they are. After all, there is no longer a tiger chasing us down the hills, but the angry boss may seem like one. And every action of their’s may seem more negative than it actually is.

It is a deep human instinct and nature to believe that things will continue to be as they have been before. While we all can philosophise and say that things change, one or the other aspect of life will remain constant.

While there are times when you want to believe that things will remain as they are, life does change, and circumstances do change.

This is another survival instinct. Like the negativity instinct, the fear instinct is one’s tendency to pay attention to the fearful and frightening things. We are programmed to identify threats and dangers, however, this very instinct — which helped our forefathers understand if the rustle in the bushes was a snake — can today make us exaggerate our negative perceptions.

If left unchecked, it can significantly cloud your decision-making, judgment and everything that may seem more dangerous and scarier. As founders, you would need to take risks that are calculated. One can never fully eliminate the risk, but if you end up being fearful after taking the plunge, you may end up miscalculating several things.

This pertains to looking at something or perceiving something bigger than what it actually is, especially when the numbers or the data is isolated. Often, fragmented evidence can lead one to inaccuracy in understanding a problem and even push towards misallocation of resources. However, this can be countered by comparing and dividing the data.

This helps the brain to categorise and generalise situations around us. It makes one susceptible to missing out on differences and finer points. Like the ‘gap instinct’, the generalisation instinct makes us divide everything into 0s and 1s to understand them better.

One can break this by questioning the different choices and categories, and try to see the differences.

Like the straight line instinct, this makes us see past characteristics and determine people, events, groups, and cultures, and makes us believe that they are ‘destined’ to remain the same. The authors explain that if you look closely at history, small changes are compounded with time, individual changes seem immediate, and group dynamics and changes may take longer.

[YS Learn] Moglix founder Rahul Garg on getting marquee investors like Ratan Tata, Accel on board during early days

This is the brain’s tendency to see simple explanations and solutions, and at the same time, blind-siding complexities and different perspectives. We tend to be in favour of or against a certain idea that doesn’t fit our perspective. Reality sometimes is different, which is why it is important to test out your favourite ideas and see if you can see the gaps as others do.

Be willing to take in new information from different fields. Avoid blind-spots by taking different perspectives. The best solutions cannot be created without taking other perspectives into account.

‘The easy way out’ is to find a simple and clear reason why some bad things happened. We have a tendency to look for guilty parties to blame for one’s problem. The authors say, “We like to believe that things happen because someone wanted them to, that individuals have power and agency: otherwise, the world feels unpredictable, confusing, and frightening.”

There is an instinct to divide the world into heroes and villains. Turn that into looking for the cause and systems that support growth.

The need to take immediate action in response to a threat or danger is classified as urgency instinct. While taking that action on an oncoming physical danger is helpful, the modern world has more complex dangers. While urgency is helpful, it can also increase our reactions, make us prone to mistakes and cloud our judgement. Think analytically, look at data and what needs to be done in a more holistic way.