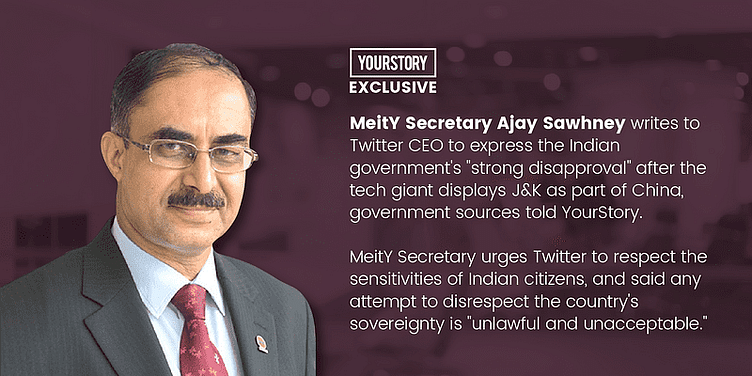 The Ministry of Electronics and Information Technology wrote a letter to Twitter CEO Jack Dorsey conveying "strong disapproval" of the Indian government after the social media displayed Jammu and Kashmir's Leh as part of China, sources in the ministry told YourStory.

The Ministry of Electronics and Information Technology has written a letter to Twitter CEO Jack Dorsey conveying the Indian government's strong disapproval after the tech giant geo-tagged Jammu and Kashmir's Leh as part of China, sources in the government told YourStory.

Ajay Sawhney, Secretary, MeitY, in his letter reminded the CEO that Leh is the headquarter of Ladakh, and that both Ladakh as well as J&K are "integral and inalienable parts of India, governed by the Constitution of India," sources familiar with the matter added.

MeitY Secretary Ajay Sawhney also urged Twitter to respect the sensitivities of Indian citizens, and said that any attempt to disrespect the country's sovereignty is "unlawful and unacceptable", sources told YourStory.

He also said that Twitter's actions not only bring disrepute to the social media platform, but also "raises questions about its neutrality and fairness", sources added.

"Twitter remains committed to working with the Government of India. We respect the sensitivities involved and have duly acknowledged the letter," a Twitter spokesperson told YourStory in response to the exclusive.

The incident came to light on Sunday after Twitter geo-tagged Jammu and Kashmir as part of the People's Republic of China during a live broadcast by a journalist at a war memorial in Leh, the capital of Ladakh.

Nitin Gokhale, the journalist, was live-broadcasting on Twitter from the Hall of Fame - a memorial for soldiers who lost their lives fighting for the country - when the location tag displayed in the video marked Jammu and Kashmir as part of China. Twitter users, including Gokhale, pointed out the error and tagged Twitter's official handles.

Twitter folks, I just did a live from Hall of Fame. Giving Hall of Fame as the location and guess what it is saying Jammu & Kashmir, Peoples Republic of China! Are you guys nuts?

Nitin then asked his followers to also broadcast live after geo-tagging themselves at the Hall of Fame to check if it was a problem specific to him. Others got the same results too - J&K kept getting tagged to the People's Republic of China.

There you are. Someone else also tried it. Same result https://t.co/VfRzV3PMvu

Twitter responded to Nitin's messages saying "We became aware of this technical issue on Sunday, and understand and respect the sensitivities around it. The teams have worked swiftly to investigate and resolve the concerned geotag issue."

But the issue persisted despite Twitter's "investigation", as pointed out by Nitin on Tuesday, 20 Oct 2020.

You are still getting it wrong @Twitter @TwitterSupport @TwitterIndia Leh airport is shown in Jammu and Kashmir! See my live broadcast. Leh fyi is in the Union Territory of Ladakh. Or is it your case that the reorganisation done last year is illegal? See attached screenshot pic.twitter.com/cIOo5cjER9