Building a multinational edtech startup from India. Learn from Byju Raveendran only at TechSparks 2020 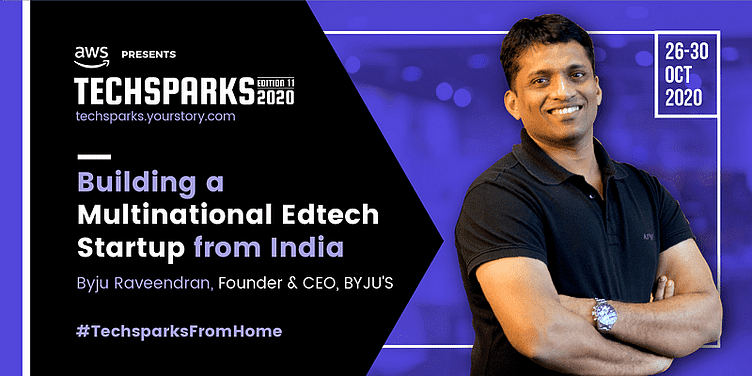 At TechSparks 2020, BYJU'S Founder Byju Raveendran will talk about the whys, hows, and whats of his entrepreneurial journey. Catch this in-depth conversation at the all-virtual TechSparks session.

Byju Raveendran is a poster boy for the Indian startup ecosystem for being a pioneer with many important milestones to his name.

The teacher-turned-entrepreneur — famed for teaching thousands of students in large auditoriums before taking these lessons online — has built ﻿BYJU'S﻿ into the world’s largest edtech multinational startup in less than a decade. The journey to achieving this rare feat even while eyeing bigger milestones in the future offers many learnings for entrepreneurs — all of which we expect Byju to share during his session at YourStory’s flagship event, TechSparks 2020.

Without doubt, there’s a long list of firsts to Byju Raveendran’s credit: category creator, global industry leader, pioneer of intuitive online teaching methods, founder and CEO of the most valued edtech startup… the list goes on.

It’s no surprise then that Byju Raveendran’s journey to creating an edtech behemoth that teaches 57 million students across 1,700 cities is like none other.

Firstly, Byju isn’t your quintessential entrepreneur with an IIT and IIM tag. He represents small-town India having grown up in the coastal village of Azhikode in Kerala.

Secondly, Byju didn’t study in an English-medium school. He studied in a Malayalam-medium government school, and reveals that he improved his English by listening to sports commentary on radio.

Thirdly, and perhaps most importantly, Byju didn't start out with a plan to build a business. In his own words, Byju Raveendran started up with a view to marry his passion for teaching with a ‘deep need’ for access to education for millions in the country.

So at Byju’s TechSparks 2020 session, like his 57 million students on the BYJU’S platform, we want to also take lessons from him. Lessons in entrepreneurship; on the whys, hows, and whats of his incredible journey pursuing his passion; on his company’s growth trajectory so we can decode his recipe for scaling a business in unfamiliar terrain, and; on the qualities and learnings that have made him one of India’s most successful new-age entrepreneurs. And we want to learn it all - first hand from him.

Catch this in-depth conversation between Byju Raveendran and ﻿YourStory Media﻿ Founder and CEO Shradha Sharma only at TechSparks 2020, India’s largest startup-tech conference, coming to your homes in an all-virtual experience on 26-30 Oct 2020.

For this and other such events, check out our TechSparks 2020 website.

You can also book your place for this all-virtual conference via Paytm Insider or BookMyShow or TownScript.