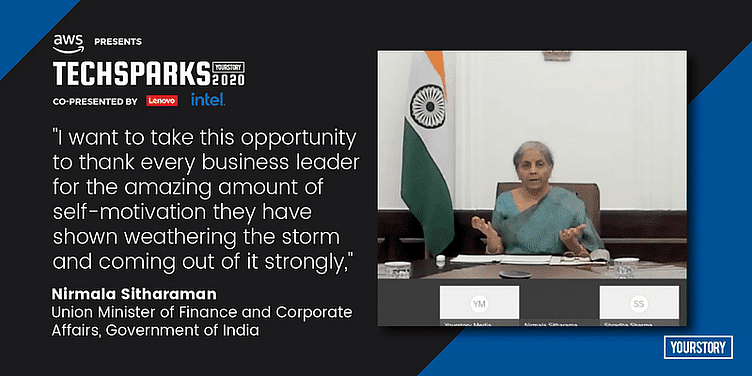 Speaking on Day 3 of TechSparks 2020, Finance Minister Nirmala Sitharaman stressed on the need for open dialogue between the government and the people of India. She added the SME/MSME sector has remained a priority for the country.

Highlighting the role that Indian businesses have played in helping the economy to get back on its feet, and lauding the courage displayed by the country’s populace, Union Finance Minister Nirmala Sitharaman, in an invigorating conversation at TechSparks 2020, said the SME and MSME sector remains a priority for the government.

The Finance Minister said that she learned from interactions with businesses over the past seven months that the industry is resetting the way in which they’re doing business, manufacturing, building relationships with their banks, and even dealing with the markets.

“All that tells me is that India is far more confident today,” she said at the virtual event.

Restressing the role SMEs and MSMEs play in bolstering the Indian economy, the Finance Minister said that she has been closely monitoring how the relief packages announced by the government are helping to keep the lights on in the offices — and she has learned from business owners that demand is coming back.

Sectors that have been especially struggling during the pandemic have taken advantage of government measures to pull themselves out of existential predicaments — and the government is determined to continue providing support where needed, she added.

One of the things the government got right while charting out the business-rescue package was changing the scope of SMEs and MSMEs, which helped more establishments with some breathing space as they were embattled by the pandemic, Sitharaman said.

“The idea of Aatmanirbhar is to recognise that the Indian economy is dependent a lot on MSMEs and private enterprises, compared to large corporates. MSMEs are increasingly entering newer areas where they can come up with value-addition and in-situ solutions, and also generating employment opportunities,” she added.

The finance ministry has already undertaken several measures to boost the economy. Earlier this month, Sitharaman had announced a Rs 73,000 crore stimulus package, including advance payment of a part of wages to central government employees and cash in lieu of LTC, to catalyse consumer demand, and increase spending and investment in an economy battered by COVID-19.

In May, the government had announced a Rs 20 lakh crore 'Aatmanirbhar Bharat' stimulus package, to catalyse economic recovery.

Talk to us, ask questions, but don’t stress

Attempting to further soothe frayed nerves, Sitharaman urged greater participation from the Indian populace in telling the government what the country needs and what policymakers could do, in their capacities, to help the country grow.

“The best time to do something new is today. Don't hold back; tell us what you want India to do for you. Nothing should hold us back from doing what we want to do," she said — a message especially for the country’s young entrepreneurs.

“As young people of the country, tell us (the government) what is not happening. I, for one, will take this seriously. Do ask questions; we are here to answer. What is not happening is certainly something that I want you all to speak about," she added.

Building for India, from India

Outlining the road to a truly ‘Aatmanirbhar Bharat’, the union minister said that India has to focus on building world-class products that not only meet domestic demand and reduce dependence on imports, but can also meet international standards.

She also clarified that ‘Aatmanirbhar’ does not mean shutting the Indian economy down to exports or foreign trade — but explore and expand the domestic market so that supply and demand can both find takers within the country.

“Aatmanirbharta comes from the capacity to produce world-class products, in-situ, where we don’t have to get it from somewhere else — we can get them in India,” she explained.

[TechSparks 2020] To enable the people of India to go digital, technology should be homegrown, says IT Minister Ravi Shankar Prasad

Becoming more digitised and using technology to not only improve processes, but also create new uses for it is another way in which India can become more ‘aatmanirbhar’, Sitharaman said, in line with IT and Telecommunications Minister Ravi Shankar Prasad’s message to the country earlier in the day at TechSparks 2020.

“Digital technology has transformed our lives. I want people to adopt technology — bring in tech wherever you want and wherever you can. Look at things from a completely new perspective. We want a new India — we are ready to facilitate,” she said.