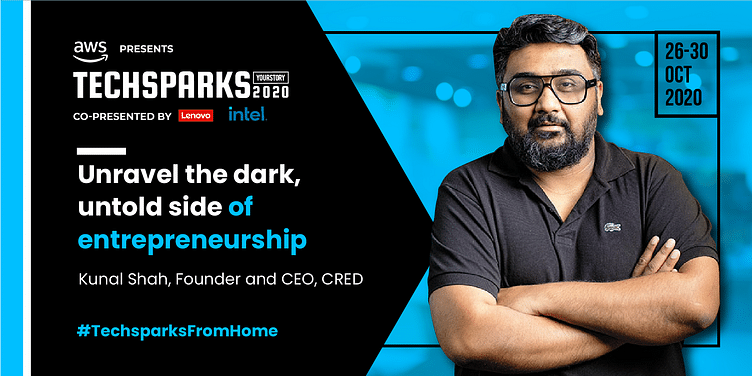 At TechSparks 2020, Kunal Shah, Founder of CRED, talks candidly about the dark and untold side of starting up and entrepreneurship.

There is a famous quote that says, “Success has many fathers, but failure is an orphan.”

Ask any entrepreneur and they will tell you the journey of founding and running a company is tough. You will get brickbats and bouquets in equal measures. And sometimes more brickbats than you bargained for.

At the virtual 11th edition of TechSparks 2020, Kunal Shah, Founder of ﻿CRED﻿, spoke with Shradha Sharma, Founder and CEO of ﻿YourStory Media﻿, in a no-holds-barred conversation about the unglamorous journey of starting up and running a company.

“The system makes it extremely hard for young entrepreneurs to succeed. If, as a country, we keep ridiculing risk-takers, we will always be a nation of job seekers,” Kunal said candidly.

A second-time entrepreneur, Kunal’s earlier startup Freecharge was acquired by ﻿Snapdeal﻿ in 2015 for $400 million, making it one of the largest acquisitions of that year. He has since been a mentor and investor for several startups.

His new startup CRED, which focuses on the top 30-40 million credit card users in the country, is looking at three main revenue moats – BFSI ecosystem, merchant ecosystem, and consumer ecosystem.

The startup has been in the news in the past few weeks with its ads featuring various Bollywood bigwigs ridiculing themselves. “It is very rare that people laugh at themselves. This ad was an opportunity to do so,” Kunal said as an aside in the virtual fireside chat.

But more importantly, the conversation revolved around the anxiety, stress, negativity, and brickbats that have to face entrepreneurs face daily.

Here are the top key takeaways from the conversation that did not have a dull moment. Known for his one-liners and his deep socio-cultural insights, Kunal Shah did not disappoint.

Learn to develop a thick skin

The value of scars

At CRED, we have about 35-40 ex-founders. But we value their scars and their risk-taking ability. This is the place I ensure that they do the best work of their life. You just have to empower them. You have to trust them instead of creating a cycle of mistrust everywhere. Everybody just wants to do good work. Just empower them.

It is not always about the money

Make your business successful, not the idea

Be emotional about your company and people, but not your decisions. Emotions are required in our care, vision, values, but decisions have to be rational.

There are no self-made people

Get access to select LIVE keynotes and exhibits at TechSparks 2020. In the 11th edition of TechSparks, we bring you best from the startup world to help you scale and succeed. Join now! #TechSparksFromHome