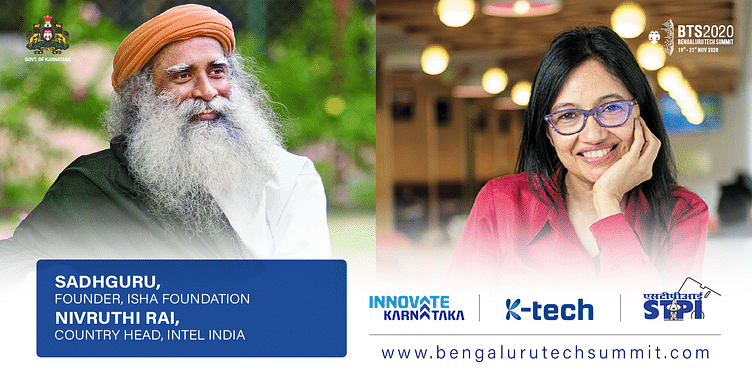 In a conversation brimming with insights, Sadhguru speaks with Nivruthi Rai, Country Head, Intel India, about the interaction of science and spirituality, and investing in human potential.

Named one of India's 50 most influential people, Sadhguru's work has touched the lives of millions worldwide through his transformational programmes. As a visionary, internationally renowned speaker, and bestselling author, Sadhguru has been an influential voice at major global forums, including the United Nations World Headquarters and the World Economic Forum, addressing issues as diverse as socio-economic development, leadership, and spirituality.

At the Bengaluru Tech Summit, in an insight-filled conversation with Nivruthi Rai, Country Head, Intel India, he spoke about the interaction of science and spirituality, and investing in human potential.

What is fear, and why is it such a crippling emotion?

Sadhguru began the conversation speaking about fear and how it could be a severely crippling emotion. “Human genius, human competence, and the human capability, have been severely crippled because of the fear of suffering,” he said.

“It’s very important that one is free from the fear of suffering. Less than one percent of individuals have been able to unfold their true potential. That translates to nearly 99 percent of fear-based motivation,” he added, talking how religious, moralistic, and ethical forces have historically managed people with fear, and how that needs to change.

Can AI be built on the foundation of ethics?

Exploring the intersectionality of technology and spirituality, and contextualising how artificial intelligence is being looked at the technology for population scale, Nivruthi asked if there was a need for it to be built on a foundation of ethics, i.e., leveraging spiritual knowledge into solutions that AI could develop.

Answering her question, Sadhguru began by clarifying that spirituality was not ethics. Humanity, and not morality and ethics, is necessarily the answer to the solution.

“The highest technology on the planet is the human mechanism itself. Right now, human beings are only suffering their own intelligence, their own competence."

“Human intelligence has been left unused, mishandled, and often against ourselves in so many different ways. Whatever the technology, its impact upon the world is not determined by the technology alone, but the one who handles it,” he said.

“Technology by itself is agnostic, it has no quality of its own. However, looking at technology historically, cutting-edge technology always went into the military hands first. After we have figured out how we can kill people with this technology, we figure out how to save lives, how to do good to the world. If we have to change this, it is not going to happen with morality, because morality is very identity-based,” he explained.

“This is why the spiritual process is significant because spirituality means your experience of life has transcended your physical nature. Everything functions around our identity. So, essentially, this notion of a limited identity must go,” he added.

“Technology should be handled by human intelligence and governed by human-centred rules,” Nivruthi summed up.

Expand the happiness that's within you

Talking about how science is actually derived from human consciousness, and how untruth is the basis of all misery when people deeply identify with which they are not, Sadhguru said, “Modern scientists talking about how human experiences has a chemical basis, you know. Suppose you lose your peace, you go to the doctor, he gives you a bill, and it makes you peaceful for a period of time. But, the greatest chemical factory is right here, the most sophisticated chemical factories are right here.

“When you have such a complex chemical factory, the question is only whether you are wonderful, or efficiency evil or you are lousy. See, if you are a good CEO, you would produce blissfulness out of your chemistry. If you're a lousy CEO, you make misery out of that,” he added.

Discussing how human intelligence has been misused and mishandled in many ways, Sadhguru spoke about the importance of identifying with our ignorance, not with our intellect. He said, “In this universe, not even one percent is a physical manifestation, the rest is just empty space. This is why the spiritual process is only concerned about that 99 percent, not about the one percent. This is what the word Shiva means – that which is not.”

The future should be about human potential management

Talking about the broader sense of happiness in the workplace context, and how the future should be about human potential management, Sadhguru said, “A human is not a resource, but a potential. If you treat something as a resource, you're only looking at maybe permutations and combinations of what you can do with the same thing. But, a human being is a potential. Human resource can just look at how to galvanise human beings to be at the highest level of potential.”

Memory should be a platform, not a trap

Sadhguru also discussed how one could tap into the true possibilities of the mind, speaking about its four dimensions, namely buddhi, manas, ahankara, and chitta. He also spoke about how the modern education systems and modern sciences have largely limited themselves to buddhi, and how it was not necessarily a good practice.

“Our education systems have given us this feeling that memory is intelligence. This is the greatest harm we have done to humanity. If I can read the textbook and remember every word, everybody thinks I am brilliant. But, today, you know, your chip can do it."

'There is a fourth dimension of intelligence called chitta. Chitta is pure intelligence without an iota of memory in it. That means if you touch your chitta, you become boundless in your perception,” he explained.

“If you touch this dimension of your mind, which is the linking point to one’s consciousness, you do not even have to wish for anything, you do not have to dream of anything — the best possible thing that can happen to you will anyway happen,” he added.

Nivruthi also touched upon the moral and practical implications of disseminating the COVID-19 vaccine as she was part of a team, which would be looking at disseminating vaccine in Karnataka.

“I believe the logical answer will be those who are exposed most, those whose lives are most at risk — medical personnel and police personnel on active duty — both in India and outside the country, should be prioritised 100 percent. As should notable sections like those with co-morbidity, and those over 65 to 70 years of age. The more vulnerable also include exposed people who are working on a daily basis. This may be just somebody who sweeps the floor in a railway station, it could be all those people who have to go out to work to make a living today, they must get it first. It is very important if you want to stop the pandemic,” he said.