Using technology to foster a culture of agripreneurship in India 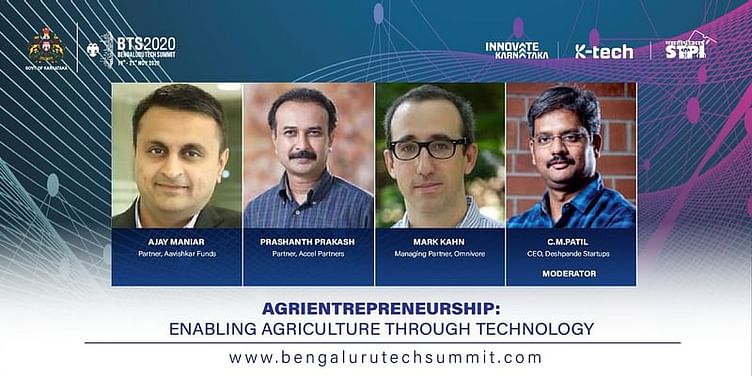 At Bengaluru Tech Summit 2020, experts spoke about the agriculture ecosystem in India, and how to enable the youth in the country to create an impact in the agritech sector.

But, he said the optimism must be tempered with patience, adding that while there's going to be a transformation, it will take over a decade for execution considering operational hurdles in India.

Mark — who was first introduced to Indian agriculture as an intern in ITC in 2005 and having run Omnivore Ventures for a decade — agreed that there is certainly more excitement in this space now. In the last decade or so, he has seen three waves of entrepreneurs. The first, who he calls lunatics, are those who were crazy enough to start up in 2010, at a time when no one was interested and it was impossible to raise money.

The second wave brought in a lot of individuals who had prior corporate experience. In the last five years, entrepreneurs are younger and have prior startup experience. "We're seeing more startup veterans who are applying their experience from the startup ecosystem to the agritech sector," said Mark.

Technology as an enabler

Ajay said that with the digital grain revolution, technology has permeated every section of the society, enabling farmers to digitise their food grains.

"Using capital and talent, we can make a huge difference," he added.

Observing the drastic shift in Hubli's infrastructure, CM Patil said that India has done fairly good in infrastructure, thanks to the government and policymakers. But the big question is how can we make the ecosystem more farmer-centric and create value?

Mark points out the ‘fantastic’ 4G rollout, and the drop in the cost of smartphones, and digital hardware being among a few good technological aspects. On the other side, there are challenges that we need to address with regards to getting the average unirrigated farmer online and building of the agristack.

In Karnataka, where the landholding is less than two-three acres for a majority of farmers who are not tech-savvy, agristack can be a challenge. "While farmers' collectives have good intentions, they don't work either because of political influence or because they are first-generation entrepreneurs with no clue about the business," said Prashant. He added that Farmer Producer Organisations (FPOs) can support what these entrepreneurs have to offer, but it’s a work in progress in the country. The answer lies in building collaboration in this value chain through institutions and R&D organisations and entrepreneurs.

The youth of tomorrow as agripreneurs

On what it takes to convert the youth of India to agripreneurs, CM Patil said they need to be engaged in a meaningful way and we must show them that every problem can be an opportunity.

Prashant added that graduates are not aware of the potential or the power of what is happening in their backyard and how they can participate. "Building awareness to me is to make them understand about entrepreneurship. In addition to what they are studying, show them that the ecosystem around them is transforming and why they should be excited to be a part of it. This should start from the educators." He added that if we gave agritech jobs the same amount of respect a corporate job gets, it would inspire the youth.

Ajay, on the other hand, said that entrepreneurship comes naturally and to expect universities to churn out agripreneurs is an impossible feat.

"Universities can only train, people should decide what they want to do. What can really move a lot of great talent into this space is great success stories. That will inspire the youth and set the wheel in motion."