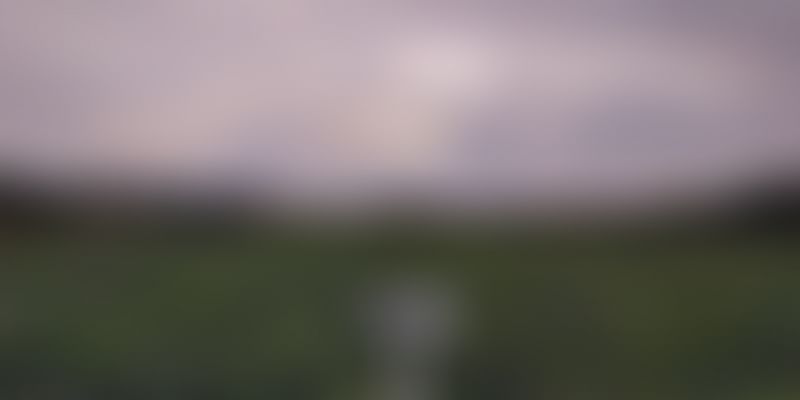 For decades, Indian agriculture has relied on farmers’ intuition when it came to crop cycles, soil nutrients, climatic conditions, and other parameters.

But even experienced farmers have not always been able to escape the perils of climate change, losing their crops to unpredictable weather conditions, soil degradation, and unmitigated pest attacks.

This is what entrepreneur Ananda Verma, who hails from a farming family of UP’s Azamgarh District, remembers of his father’s trysts with agriculture.

Despite seven decades of farming experience in the family, Ananda’s father, who grew cauliflower seeds, would find his crops damaged due to unprecedented or unforeseen factors.

“Even though agriculture is the primary source of income in Azamgarh, most farmers faced the same problems and were unable to prevent crop losses,” Ananda tells YourStory.

Initially reluctant to follow a career in farming, Ananda went on to pursue engineering at IIIT Bangalore and began working in the IT sector. But eventually, his genes started taking over.

In 2017, along with fellow techie Shailendra Tiwari, Ananda bought a small farmland near Mysore to grow “coloured capsicum” (bell peppers) as a weekend getaway from their big-city life. “Shailendra also has a farming background. We had a shared interest, and started looking at the prerequisites of growing fruits and vegetables,” he shares.

However, the two realised the struggles of growing horticulture crops — they are more high maintenance than paddy, wheat, and cereals.

“Paddy is a low-input and low-output crop. But for capsicum and other vegetables, it is just the reverse. Horticulture crops require continuous monitoring and active management of soil nutrients, pests, and diseases. That is where most farmers face problems.”

By the end of 2017, the duo came up with a tech fix for this problem of information scarcity and lack of visibility in horticulture farming and decided to launch Fasal.

Fasal, which means ‘crop’ in Hindi, was set up to change the farmers’ problem-solving approach “from reactive to preventive”.  The Bengaluru-based startup officially began operations in early 2018.

But first, how does Fasal do what it does?

Precision farming with data and AI

The startup has built an IoT-led device with remote sensors that can be placed at farms to record crop, soil, and weather conditions. The real-time data collected by the device is harnessed using AI and ML to generate farm-specific, crop-specific, and crop-stage-specific intelligence that is delivered to farmers in vernacular languages through the Fasal app.

Farmers can use these insights and predictions to plan their irrigation management, pest and disease management, fertiliser, fungicide and pesticide application or make any other adjustments needed to create optimal growth conditions for crops.

“Fasal takes the guesswork out of farming and helps run farms on autopilot mode. Farmers can monitor their farms anytime, anywhere without being present on the field. Our goal is to help them make data-driven decisions on disease outbreaks, irrigation patterns, and crop care practices.”

The algorithms can predict seasonal pathogens in crops almost a week in advance, thus allowing farmers to take timely preventive measures. It also helps them stay away from the overuse of pesticides and chemicals.

“Overspraying ruins crops and leaves a chemical residue that can cause cancer. That is why India doesn’t have export varieties of fruits and vegetables. Foreign markets have strict guidelines on residue limits,” Ananda says.

Also, farmers over irrigate because they have no definitive way to assess the amount of water needed in the crop’s life cycle. The soil may look dry on top, but it retains water at the root zone. As a result, agriculture is fast depleting India’s largest natural resource – water.

Fasal not only solves this problem of over-irrigation with precise data, but also incentivises farmers for saving water through its new ‘Water Credit’ initiative aimed at promoting sustainable agriculture.

Farmers who maintain a certain water level for maximum hours in a month stand to get their entire Fasal subscription money refunded. About 25 farmers have already been allocated water credit since October 2020.

The startup claims to have saved three billion litres of freshwater to date. Farmers using the platform are also witnessing significant spikes in profits and “huge water savings” even in the driest regions of Maharashtra.

Co-founder Shailendra says, “Farmers over irrigate and this behaviour is common across regions in India. In horticulture, we have documented numerous cases where the farmer irrigated 30–40 percent less than the previous season with the help of Fasal’s plot-specific irrigation recommendations, and had more yield and better quality as compared to previous seasons. So ‘more’ is definitely possible with ‘less’.”

Like most precision agriculture startups in India — and the agritech sector a large — Fasal’s growth has surged in the last two years.

It also claims that its revenues have grown exponentially since 2019. “Despite the COVID-19 intervention, we’ve scaled up well and grown 4X in 2020,” Ananda reveals.

Fasal’s revenues are up almost 250 percent, riding on increased tech adoption by farmers in the wake of the pandemic. It charges an upfront fee for installing the IoT device in farms, and a monthly subscription fee for providing crop data and advisory.

The startup claims that its IoT devices cost 3X lower than a typical drip irrigation system per hectare of land. Each device lasts for four to five years.

“We operate on a pay-as-you-go model and the charges are customised for farmers depending on their crop requirements,” says the founder.

“The pandemic has created ripple effects in terms of awareness, adoption, and reception to technology in agriculture. Farming products survive only when farmers become advocates themselves, and that is happening,” Ananda adds.

The IoT-led agri platform also claims to have increased crop yields by 30-40 percent, reduced pests and diseases by 50-60 percent, and cut down water usage by 30 percent, thereby bringing down farmers’ input costs by 50 percent.

Fasal is targeting 100,000 acres of land and crop coverage in 2021, and is looking to hit an annual revenue run rate of $1 million. The startup has built end-to-end solutions for eight crops, including grape, pomegranate, tomato, chilli, capsicum, and will expand it to 18 by the end of the year.

It is also running pilots in the pre-harvest value chain for tea, coffee, orange, and apple.

“We usually take a crop-based approach. So, any region in the world that produces grapes becomes a potential market for us,” Ananda says.

Fasal also plans to expand to other states like Himachal Pradesh, Rajasthan, Gujarat, and Tamil Nadu, as well as enter Southeast Asia that has similar farmer profiles and climatic zones as India’s.

Fasal has raised about $1.9 million so far, including a $1.6 million seed round led by Omnivore and Wavemaker Partners in October 2019.

At the time of funding, Mark Kahn, Managing Partner of Omnivore, had said,

“Fasal is building a strong agritech startup aiming to reach the most progressive horticulture farmers in India and Southeast Asia. We plan to help them accelerate the growth of their B2B2F model by connecting them to leading agribusinesses and onboarding farmers they source from.”

Fasal operates in a rapidly growing precision agriculture market that is poised to reach $6.34 billion by 2022, according to BIS Research.

It competes with the likes of CropIn, Intello Labs, Tartan Sense, Aigroedge, FarmERP, SenseGrass, Plantix, and others in this crowded segment.

After gaining expertise in certain crops in India, the startup hopes to replicate its success in new global territories.

To ensure quick and consistent scale-up, Fasal has launched a plug-and-play version (known as Fasal Kranti) of its IoT device that can bring down installation time from 15 minutes to five minutes.

Ananda says, “It is a handy device and quicker to deploy. This innovation enables us to go anywhere, and doesn’t limit us by geography. Farmers can install the sensors themselves without needing any additional resources.”

In future, Fasal also looks to add value to businesses in allied sectors — from food processing to farm financing to direct sourcing and traceability. Its core focus, however, will continue to be on horticulture farmers.

Ananda sums up by saying, “We are on a mission to help farmers make data-driven, logical decisions and shift farming to autopilot mode.