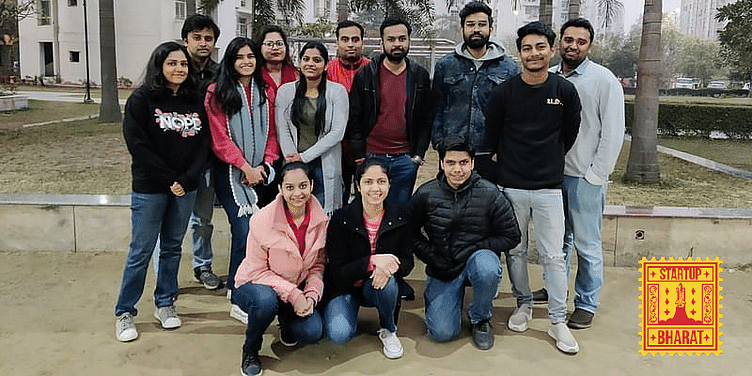 Founded in 2016 by Vibhore Mayank and Varul Mayank, mediatech startup Knocksense is a local news and recommendations platform that does not provide sensational news pieces.

Brothers Varul Mayank and Vibhore Mayank launched ﻿Knocksense﻿ with an aim to create a content network that produces original and hyperlocal content presented in a non-sensational way.

Apart from this, Varul says, almost all the local vendors and service providers in Tier II/III cities advertise via pamphlet distribution, posters behind auto-rickshaws and electricity poles, etc.

“Knocksense aims at getting this unorganised ad market from offline to online, and also become the first digital alternative to brands, which currently advertise via hoardings, radio channels, newspapers, etc.,” he says.

As of now, the startup, which is present in six cities in India, including Mumbai, Lucknow, Kanpur, Goa, Indore, and Jaipur, claims to be generating over 20 million organic impressions per month.

“Over 200 local brands and freelancers advertised with us in the last financial year and the brand engagement has grown by 300 percent year-on-year,” Varul says.

Knocksense gives readers relevant and local content, which is non-political in nature and does not breed negativity or sensationalism. It is a solution that disrupts the age-old network of reporters and stringers and creates an ecosystem of news reporting-curation-distribution-advertisements and subscriptions at the hyperlocal level.

“At the local level, especially in Tier II/III cities, there are no credible local content producers, and the local newspapers are flooded with content around politics, crime, accidents, court cases, etc., which doesn’t meet human interest, and hence leads to low readership. At Knocksense, our content arc is not limited to news only, and we are planning to launch visual fiction/non-fiction content soon,” Varul tells YourStory.

“When it comes to news, we are committed to producing content that does not breed negativity or sensationalism and also stays away from divisive stories around politics and religion,” he says.

There are other multiple user-generated digital news entities like Lokal App, PublicVibe, etc., but Knocksense is a content production house and not a tech platform for news, according to Varul.

Before starting Knocksense, Amity University alumnus Varul worked as a journalist at the Hindustan Times. Vibhore, an alumnus of Whistling Woods, worked as a freelancer in the advertising, films, and TV industry.

Varul is now heading the editorial and operations at Knocksense, while Vibhore is looking after advertisement, marketing, and growth. The startup has a total team of 15 employees and is looking to expand to 35 in the next one month.

In January 2021, the startup raised $200,000 angel funding from Mohit Satyanand’s syndicate on LetsVenture, We Founder Circle, and other investors.

While announcing the fundraising, Varul said, “COVID-19 situation has increased the digital content consumption. Our aim is to create a truly local channel, which brings the unorganised local ad market from offline to online, and the pandemic has certainly helped the cause. The raised funds will help us penetrate deep in the markets we are active in, and launch our subscription plan, which will strengthen user engagement and brand integration.”

Post this fundraise, the startup has projected a revenue growth of 300 percent and the traction is projected to increase by more than five times. Further, the startup plans to launch video stories, as well as Hindi content, while expanding to other Tier-II cities of India. Knocksense said it also plans to invest these funds in improving its IT infrastructure and strengthening its content team.

“In the past two years, we have worked with 200+ local brands. Post this fundraise with added revenue streams, we are looking to onboard 1,000+ local brands and generate a revenue of Rs 5-7 core through local brands alone,” Varul says.

Before this funding, Knocksense had also raised seed funding from Neelansha Dwivedi, who had previously worked at Hindustan Times and Apple; Amitesh Pandey, serial investor and entrepreneur, and a bridge round from Mumbai Angels Network in June 2020.

According to a report by Dentsu Aegis Network, the digital advertising industry in India is growing at a CAGR of 27 percent and is expected to reach Rs 58,000 crore by 2025. Moreover, a lot of unorganised ads exist in Tier II/III cities like pamphlets, posters, billboards, etc., which is an unaccounted market segment, and Knocksense aims to route it online with its strong local presence.

The startup is looking for its next fundraise in the next 9-12 months, and plans to use the funding to launch operations in more Tier II /III cities. It is also planning technology upgradation primarily for video streaming, vernacular language content, and programmatic ads with the funding.

“With the launch of video production, we plan to create both non-fiction and fiction videos produced by the locals for the locals,” says Varul.

“We are also planning full-time operations in Jaipur, Indore, Agra, and Kanpur after the successful test run in 2020,” he adds.