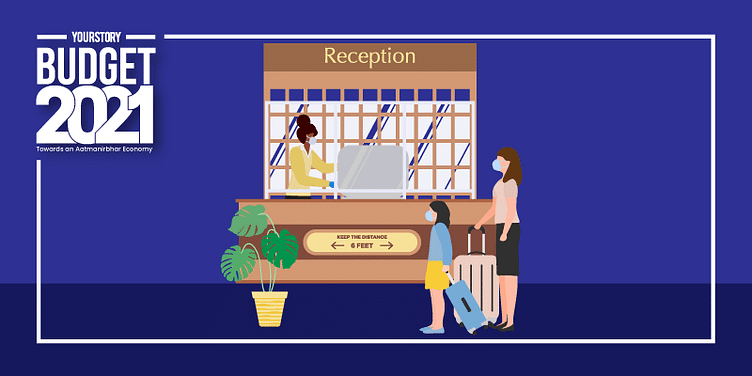 The Union Budget 2021 failed to fulfil the expectations of the travel and hospitality industries. Sector leaders and players are now hoping the government to extend support with newer ways.

After what had been its most challenging year, the hospitality industry had high hopes from Budget 2021. While there were no direct benefits announced, Finance Minister Nirmala Sitharaman provided indirect support to boost the travel and hospitality industries.

The FM did not announce any specific relief to hotels and property owners.

Rohit Kapoor, CEO of ﻿Oyo﻿ India and South Asia, said, “It is heartening to see a Budget entirely focussed on revitalising the economy. On the backbone of the proposed reforms, we believe that a focus on growth-oriented measures, economic reforms, and inclusive growth would pave the way for extensive economic recovery. The government's focus on extending and improving transport (road, railway, metro) infrastructure with nearly 217 projects worth over Rs 1 lakh crore to be completed under National Infrastructure Pipeline will enable travellers to explore hidden gems, and therefore bolster the domestic tourism and hospitality industries. Additionally, keeping up with the changing times, an overall focus on technology with interventions like incentivising and promoting digital payments will fast track India’s transition into a digitally-enabled economy.”

He further added that with the series of interventions announced by the FM, India is on the path of stable and quick economic recovery.

“The funds allocated to COVID-19 vaccines will strengthen confidence among travellers and boost faster recovery in the service sectors. The government's efforts towards skilling the country's youth and collaborating with other countries will spur entrepreneurship and enable job creation as well. This budget truly has the potential for transforming India,” he said.

Sanjyot Keer, Chef and Founder of Your Food Lab, seems to agree. He said, “The FM’s proposals for improving rail, road, ports, metro infrastructure, airports, and vista coaches in tourism routes will benefit the travel and tourism sector in the long-term.”

Having said that, he adds that the Indian hospitality, travel, and tourism sector had great expectations from Budget 2021.

Most experts and players in the hospitality sector do not seem to welcome the Union Budget announcements with open arms, and many say it has been a ‘disappointing’ Budget for the industry.

The hospitality industry accounts for almost 10 percent of the country’s GDP, employing nine percent of India’s working population, and “Yet it failed to find space in the Union Budget,” says Gurbaxish Singh Kohli, Vice President, Federation of Hotel and Restaurant Association of India (FHRAI).

Budget 2021: Hospitality industry lays out expectations after a year of constant low

Here’s what industry leaders had to say about the Union Budget:

“The Budget has failed to cheer up the restaurant industry, which is one of the most affected due to COVID-19 pandemic and subsequent lockdowns. After all the turmoil, we had our hopes pinned on the Budget and were expecting some positive measures like a stimulus package, rationalisation in GST, etc., but again we found no mention in FM’s speech. Such a critical sector contributing well to the GDP and generating employment opportunities cannot be ignored like this, especially when it is needed the most.”

“The hospitality industry has been bleeding, and the FHRAI has brought it to the government’s notice through several representations time and again. Our pre-Budget memorandum to the FM included some priority reforms to stabilise the industry such as:

The hospitality industry is disheartened and feels demotivated in its darkest hour. With zero foreign exchange earnings and less than 25 percent of pre-pandemic revenues, the sector is facing an existential crisis. The industry is the fall guy for the government.

We stand by and come through for the government in its every need, as we did during this pandemic, but we are surprised that the sector could not find even a mention in the FM's budget.

We wish our government would study what other countries have done to ensure tourism, the worst-hit sector, is kept alive. The hospitality and tourism industry was looking forward to some relief measures to lift this most severely affected industry by COVID-19. Instead, it has yet again completely and fully chosen to ignore us.”

“Tier-II and III cities have seen significant growth in demand for air travel and first time flyers post relaxation of lockdown norms. The monetisation of airports in these areas will help capitalise this growing demand by accelerating infrastructure development in underserved areas and strengthening regional air connectivity.

While these infrastructure measures will boost tourism in the long run, it’s sad to see that no extra spends or tax incentives were announced to provide immediate relief to the severely affected travel and tourism sector."

"Tourism constitutes 10 percent ($275 billion) to India’s GDP. This is no small amount and we required a plan by the government and the industry to overcome the havoc caused by COVID-19 in this budget. The tourism industry employs 75 million people directly or indirectly.

There were a lot of expectations from the government in the Union Budget. The tourism and hospitality sector has made several recommendations to the government to help it emerge from the impact of COVID-19 crisis. But the government failed to give importance."

“Rs 1,000 crore has been announced for tea workers of Assam and West Bengal. The details have not yet been shared but this is a positive step for the COVID impacted tea industry. Last year was a really difficult year for them and this is a timely intervention to provide much needed relief to the tea workers and will go a long way in easing the pain and hardships."

"While we welcome progressive moves like faceless Income Tax Dispute Resolution and reduction of assessment time period, one of the biggest missing links has been special consideration for the hospitality industry post-COVID crisis...A temporary relief in both direct and indirect taxes for a few years could have provided the industry the boost it needs to recover from this unprecedented crisis.

"Given the current scenario, where the focus is on health, I was hoping to see some announcement around the organic food segment in India."

“Budget 2021 has provided little support in terms of tax holiday. However, benefits like easy loans at better interest rates with simpler procedures could make it a lot easier. Input tax credit was expected to be brought back in the restaurant system. Without which we are paying more than GST to the government and we end up increasing our operations cost by 15 percent.”

"As food and beverage business owners, we pay a decent amount for commission and then on top of that we pay 18 percent taxes for which there is no rebate. It is an added expense in a business which anyway yields very little profits after commission and discounts. Though there were no announcements made in the Budget, hope we get to know later in the day through a press release."

“Last year, due to the pandemic, production of Indian tea was behind its global counterparts but the price realisation was better as compared to any other years. The average price of tea increased by almost 30 percent as compared to the fiscal year 2019-20. This has in a way, set the base for the Indian tea industry for this year, as the increase in price gives a positive outlook.

Allocating Rs 1,000 crores for Assam and West Bengal tea industry at this point is a welcome move, which will boost the Indian tea industry for the coming years. The scheme for tea farmers declared in the Budget for the welfare of children and women is a necessity at this point of time, more than ever and will help in improving things on the ground level and we're hoping this is executed in the best possible way.”

“There were a few missing initiatives in the Union Budget 2021 that we, as an industry, were expecting and could have helped in a longer run:

This could have gone a long way in enduring Atmanirbhar Bharat and the government is there to support them in their hour of need.”

"The Budget is extremely disappointing as yet again the hospitality industry has been left out...At the very least we expected some support towards regenerating employment. Given the severity of the impact of the pandemic on the hospitality sector, we were hoping for impactful, immediate and near-term support. We were equally disappointed with the continued denial of input tax credit, which is critical for survival."