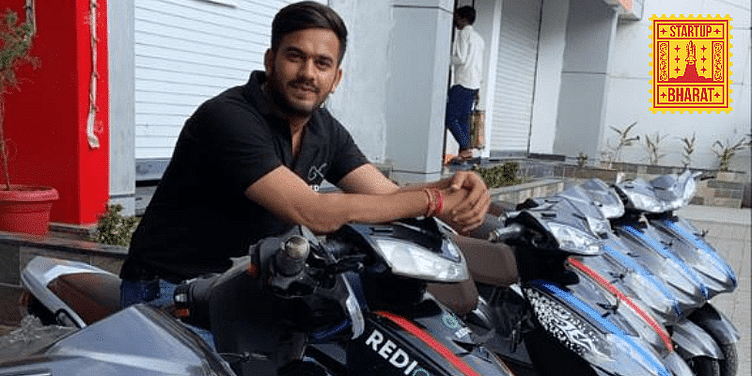 Founded in 2019, Telada Technology, better known as Redigo, is looking to grab the scooter sharing business opportunity in Tier-II cities. It is aiming to solve last-mile transportation issues in an eco-friendly and pocket-friendly manner.

As the country is looking forward to attaining sustainable development, one of the major problems to be solved in this regard is transportation. Increased adoption of electric vehicles and ride-sharing mobility services may prove to be the most important pillars for attaining green and sustainable mobility in India.

Entrepreneur Siddharth Singh Rajawat, while doing his business internship in Bengaluru, saw how scooter sharing business was growing in the city but was disappointed to see that not many were targeting Tier-II cities such as Indore for such services.

Realising the scooter sharing business potential in Indore, Siddharth founded Telada Technology Pvt. Ltd or better known by its brand name Redigo in 2019. The startup is providing eco-friendly and pocket-friendly last-mile transportation solutions in the city.

“We initially tried offline scooter rentals in the city with five electric scooters and received a lot of positive feedback. We got good feedback and validation on the concept and we started making progress on it,” Siddharth, a BBA graduate from Prestige Institute of Management and Research, Indore, tells YourStory.

“We are currently running on both offline and online mode. Users have to download the “Redigo App” from the Play Store and sign up using their mobile number. One needs to upload their driving licence, a photo, and ID documents for security and KYC purposes. Once done, users can locate the nearby hub on the app and check the available bikes,” Siddharth says.

He also adds that users can connect the app with the vehicle rented using vehicle number and switch it on and off automatically through the app.

As of now, Redigo has four hubs across Indore and has a fleet of 20 electric scooters. The startup procures the scooters from electric vehicle maker Ampere Vehicles.

“Our primary target audience is students (aged over 18 with valid driving licence) studying in colleges and coaching centers. Indore is an education hub with five universities, over 50 private colleges, and more than 500 coaching institutes for higher studies and government services test preparations. The city also has IIM and IIT,” the founder says.

Siddharth explains the company operates on a pay-per-use model. Users availing the Redigo services are charged Rs 3/Km and Rs 0.50/minute. The startup claims to have over 1.5K users as of now and is recording over 500 rides per month.

While the founder refused to disclose revenue details, he claims, “We are making four-digit revenue every day, which is making our operation cost almost zero.”

The startup was launched with an initial investment of Rs 5 lakh sourced from friends and family. Redigo is now looking to raise external funding for expanding the fleet size to at least 1,000 vehicles and launch more hubs in the city.

According to a report by Prescient & Strategic Intelligence, the Indian two-wheeler sharing market is expected to reach $94.0 million by 2025 growing at a CAGR of 20.2 percent. Several notable players including ﻿Yulu﻿, ﻿Bounce﻿, and ﻿Vogo Automotive﻿ among others are trying to disrupt the growing market.

Speaking about future plans, he says, “We will expand our business in Tier-II cities such as Bhopal, Pune, Jaipur, and Kota, among others, where we see the target audience facing the same problem.”