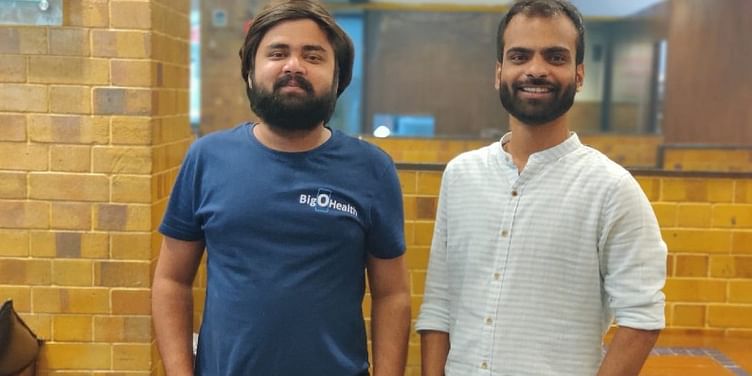 BigOHealth, launched as a project in 2018, is operational in only a few districts in North India, but has now been getting calls from all over the country for consultation.

Gaurav Rajput started working on BigOHealth, an online doctor consultation portal, in 2018. “We were just working on a potential website then to show something to our professors. It was not a serious venture,” says Gaurav over a call.

Little did he know that in three years' time, what started as a student project would go on to have a major impact on people’s lives. The website, which was created just to get some marks in college, is trying to save many lives in Bihar’s Patna, Motihari and Gopalganj districts, among others.

Gaurav, a 24-year-old  computer science graduate, officially co-founded the Delhi-based platform in 2019 with fellow batch mate Shubham Shreyas. The startup got incubated by Nexus Startup Incubator in the same year.

“We saw that people from districts like Bareilly would come for treatment at AIIMs in Delhi, and would sometimes have to wait for many days before getting treated. So we thought about developing online consultations, but for rural India,” says Gaurav.

Consumer operations started last year in April amidst the first wave of COVID-19.

“At that point, we only had a few doctors offering consultations in Motihari and Patna,” says Gaurav. Today, the platform has close to 150 doctors giving online consultations to patients across Patna, Delhi, Siwan, Motihari, Muzzaffarpur and Gopalganj. Patients can avail free consultations for COVID-19, whereas gynaecologists, dentists, dermatologists, paediatricians and general physicians, among other specialists, charge a fee between Rs 199 and Rs 1,500.

As the second wave of COVID-19 is on full swing, many states including Maharashtra, Kerala, Punjab, Bihar and Karnataka are seeing infection rates shoot up every day. Uttar Pradesh currently has at least three lakh active Covid cases with villages not being spared as well. In a worrying sign, unlike the first wave in 2020, the virus is now increasingly affecting rural parts of the country.

“Cases across Bihar are increasing at an alarming rate. A few days ago, a seven-month-old child was Covid positive. There were no doctors to provide the required treatment. The family reached out to us and we connected them with a paediatrician,” says Gaurav.

According to him, doctors are so overworked that in certain cases they do not even treat patients who test negative for Covid but have other serious illnesses.

Why the COVID-19 second wave is so bad in India

BigOHealth, though operational in only a few districts, has been getting calls from all over the country for consultation. The startup has a marketing team, which reaches out to hospitals and doctors to demonstrate the app and onboard them. The primary language of the app is Hindi, which makes it easier for people in rural areas to navigate.

The helpline number receives 100-200 calls every day, and has treated 12,500 patients till February 2021. The latest numbers have not yet been added since the second wave has kept the phones constantly ringing, as the team stays focused on reaching treatment to as many patients as possible, before it's too late.