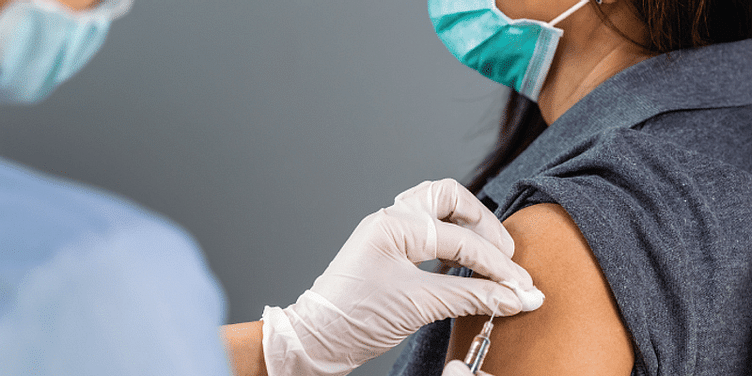 The Union Ministry of Health and Family Welfare said so far, over 17.49 crore vaccine doses have been provided to states and UTs.

More than 84 lakh COVID-19 vaccine doses are still available with states and union territories, and over 53 lakh doses will be distributed to them in the next three days, the Centre said on Saturday.

In an official statement, the Ministry of Health and Family Welfare said that so far over 17.49 crore vaccine doses have been provided to states/UTs, of which around 16.7 crore doses have been consumed.

"Of the vaccine doses provided, the total consumption, including wastages, is 16,65,49,583 doses (as per data available at 8 am on Saturday). More than 84 lakh COVID vaccine doses (84,08,187) are still available with states/UTs to be administered," the ministry said.

It said that states with a negative balance are showing more consumption (including wastage) than vaccine supplied as they have "not reconciled the vaccine they have supplied to the armed forces."

"Furthermore, more than 53 lakh (53,25,000) vaccine doses will be received in addition by states/UTs within the next three days," the ministry announced.

It said that Delhi received 40.22 lakh vaccine doses, of which it consumed 36.09 lakh doses. The ministry said that the national capital still has a balance of 4.12 lakh doses available, and within the next three days, it is likely to receive one lakh more doses. The projected population of Delhi was taken at 2.04 crore as of October 1, 2020.

Out of the 53.25 lakh vaccine doses expected to be distributed among states and UTs in the next three days, Gujarat will get 8.98 lakh vaccine doses, the maximum number of doses any state or UT will receive. The state had got over 1.39 crore doses, while it consumed 1.35 crore doses.

Following Gujarat is Maharashtra, which is likely to receive 6.03 lakh vaccine doses. Rajasthan will receive 4.50 lakh doses, and Uttar Pradesh will get four lakh doses.

Other states like West Bengal, Bihar, and Chhattisgarh will get 3.95 lakh, 3.64 lakh, and 3 lakh doses of vaccine, respectively.

Jammu and Kashmir will get 84,700 doses in the next three days. It has a projected population of 1.33 crore and had received 26.81 lakh doses, of which it has already consumed 26.72 lakh doses.

According to data shared by the ministry, 16 states and UTS, which are not going to get more doses in the next three days, are Haryana, Ladakh, Uttarakhand, Jharkhand, Arunachal Pradesh, Andhra Pradesh, Tripura, Sikkim, Puducherry, Nagaland, Mizoram, Meghalaya, Manipur, Andaman and Nicobar Islands, Lakshadweep, and Goa.

The maximum wastage of vaccine doses was recorded at Lakshadweep, which wasted 22.7 percent of the doses it had received.