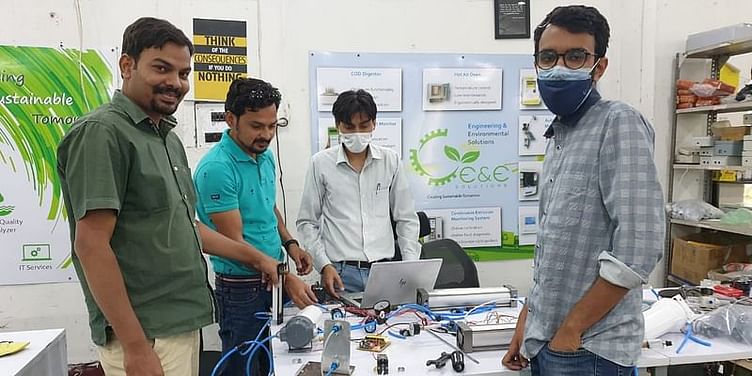 Developed by a team from tech startup Engineering & Environmental Solutions (E&E Solutions), its prototype has already been tested at a government hospital in Aligarh.

Moved by the ongoing oxygen crisis brought on by the second wave of COVID-19 in the country, a group of young techies and entrepreneurs from Aligarh decided to do their bit to help.

A team from emerging technology company Engineering & Environmental Solutions (E&E Solutions) designed their very own oxygen concentrator, and indigenously developed it at their production facility at Aligarh.

Founded in 2015, this environmental technology company’s main forte has been producing hi-tech sensor-based products for Air Quality Monitoring, Water Level Meters and Weather Monitoring Systems. But given the present crisis unfolding in the entire country, the E&E team pooled in their resources to develop their oxygen concentrator.

The prototype was successfully tested at their manufacturing plant at Aligarh in the first week of May, and the team says the results have so far been very encouraging. They are now working to make the device more efficient and market ready soon.

“We worked day and night on a war footing to conceptualise and build a prototype of the equipment. The efforts have been appreciated by the Divisional Commissioner Gaurav Dayal, who visited the company’s production facility at Aligarh, and promised all necessary support from the District Administration,” says E&E’s Research and Development Head, Syed Abu Rehan.

In order to upscale the production, E&E has partnered up with another Aligarh-based company, Precision Group, which will provide technological and production support.

In an interview with YourStory, E&E’s team explains that once fully developed, the machine will be a low-cost alternative to imported oxygen concentrators, which are relatively priced very high.

E&E’s machines are expected to cost less than Rs 40,000 per unit. Imported oxygen concentrators average anywhere between Rs 65000-75000 per unit, and sometimes, more.

On how the company is able to bring down the price, Syed says E&E’s oxygen concentrators utilise a molecular sieve to adsorb gases, and operate on the principle of rapid pressure swing adsorption of atmospheric nitrogen onto zeolite minerals at high pressure.

The technology used to develop the machine is known as Pressure Swing Adsorption (PSA), a technology used to separate some gas species from a mixture of gases under pressure according to the species' molecular characteristics and affinity for an adsorbent material.

The machine’s prototype has already been tested at a government hospital in Aligarh. The startup is looking to partner with companies that  can arrange the raw material, specifically, medical grade Zeolite. The current production capacity is limited to 30-50 machines per day, but this number will be enhanced once the company is able to rope in investors for this particular venture, says Raheel Ahmad, Head of Business Strategy.

“It is a proud and emotional moment for the entire team that our efforts have resulted in something good, and which is the need of the hour during this crises. We want to launch it in the market within the next few days so that precious lives can be saved,” adds Raheel.