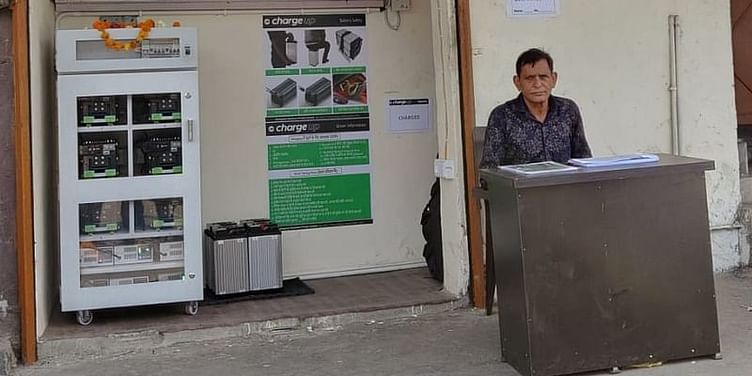 Chargeup, a New Delhi-based startup working to build Bharat’s largest battery swapping network for e-rickshaws, has raised an undisclosed amount in its ongoing pre-Series A funding.

The round was led by MapmyIndia with participation from a group of HNIs. The funding will be used as investment in marketing for customer acquisition and building the tech stack.

Founded by Varun Goenka and Akshay Kashyap in 2019, Chargeup claims to have adopted an advanced technology-driven approach to offer Battery as a Service (BaaS) solutions to e-rickshaw drivers.

The company’s standardised battery technology and execution capabilities are geared towards delivering its brand promise of a two-minute battery swap within a radius of 2 km to ensure twice the revenue for drivers and dealer partners.

From two stations at the outset, the company claims to have grown to 18 stations, catering to 500+ drivers daily. The company is clocking 9,000 swaps per month and has covered 3.5 million km on its platform since inception.

“We are excited to take the next step towards growth with this funding. With MapmyIndia’s commitment, our synergy to build the right tech stack for drivers will strengthen and give us a lead. The funding support from HNIs is also a major boost to our offerings. With a strong grip on the execution of this business, Chargeup works on a capex light and opex light model, making it fast and scalable.”

According to estimates by Mordor Intelligence, the Indian Electric Vehicle Market was valued at $5 billion in 2020 and is expected to reach $47 billion by 2026, registering a CAGR of above 44 percent during the forecast period (2021-2026).

The Indian government plans to convert about 30 percent of all passenger vehicles to EVs by 2030 under the FAME-II (Faster Adoption and Manufacturing of Electric Vehicles-II) initiative.

Being an early mover in the Indian EV battery charging sector, Chargeup is set to lead the segment in 2021-22 and will be driving standardisation of operations through integration of cutting-edge AI and analytics tools.

The company is rapidly expanding its BSS network and aiming to benefit the lives of millions of e-rickshaw drivers in India, while also expanding coverage to 2 wheelers and other LCVs.