[Podcast] From TaxiForSure to Koo: The ups and downs in Aprameya Radhakrishna’s entrepreneurial life 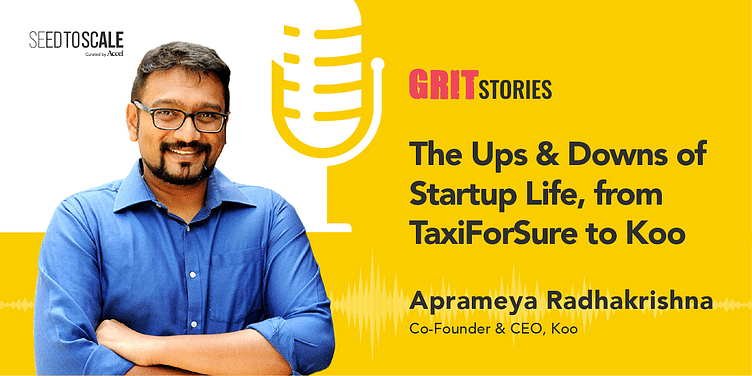 In this episode of the Accel podcast, Koo Co-founder Aprameya talks about the startup's launch, its growth amidst the COVID-19 pandemic, and how it coped with it all.

“There’s one thing I’ve always known about Aprameya Radhakrishna — he loves being an entrepreneur,” says Anand Daniel, Partner at Accel, in the latest podcast.

Aprameya is no stranger to the entrepreneurial journey. He’s the co-founder and CEO of ﻿Koo App﻿

— a microblogging platform — catering to the Indian vernacular.

Koo was born as an offshoot of Vokal, a vernacular question and answer platform. Within one year, it amassed over a million users and became a force of its own.

Before this, he was at the helm of ﻿TaxiForSure.com﻿ , leading it to a successful acquisition by Ola Cabs back in 2015.

“I was part of this journey, and Aprameya’s clarity and grit have been something I’ve been aware of throughout. It is this enthusiasm that comes across in every minute of this awesome episode,” says Anand.

In this episode of the Accel podcast, Aprameya talks about Koo’s launch, its growth amidst the COVID-19 pandemic, and how the team coped with it all.

Aprameya started TaxiForSure with a drawing on a tissue paper, and secured funding during a time angel investment wasn’t as popular as they are today.

He also talks about ﻿Vokal﻿— a P2P info-sharing startup — which Aprameya launched with Mayank Bidawatka in 2017 that caters to people who mostly belong to rural pockets and are first-time internet users.

He explains how the internet is built on content consumption and sharing, and why it was important to create avenues to do both that isn’t primarily English language-based.

While there is no microblogging behaviour in local languages on a large scale in India, Koo offers a Twitter-like experience, where users can express their thoughts in Indian languages with a fellow local Indian community.

“You can Koo in text/audio/video or a combination of these modes,” he says in an earlier conversation with YourStory.

He also gives a sneak peek into what is brewing at Koo, and what the future holds for vernacular content.

“This was among my favourite conversations, which helped me better understand the fast-shifting world of content and the directions in which it is headed,” Anand shares.

6:35-8:38: Parents not agreeing for his startup stint; Shift in his own inclination towards startups and getting the conviction.

18:09-20:05: Grit to build for local language and not English: The Vokal story - empowering the non-English speaking crowd.