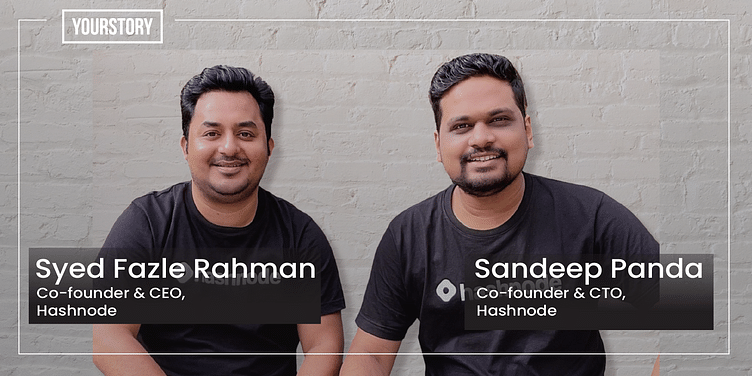 Hashnode has raised a Series A funding of $6.7 million, following a seed round of $2.1 million in December 2020. Here is why this blogging startup continues to attract tech experts as its core investors.

﻿Hashnode﻿, a Bengaluru and Delaware-based blogging startup, has raised $6.7 million in a Series A round, only eight months after its seed round of $2.1 million.

Hashnode claims to have grown from 100,000 monthly active users to one million in a year, hosting 60,000 active blogs. The startup aims to use the funding to continue to grow its user base.

Its mission is to become the top platform for software development, engineering, and technology content, which in turn will help it power the creator economy for the rapidly expanding developer community.

On why he chooses to back Hashnode, in an exclusive conversation, Des told YourStory, "Companies built around developer communities have proven to be immensely valuable, yet there is no good software for supporting this type of company building. In Hashnode, I see a great product focussed on developers and developer communities, and I see explosive traction in the amount of developers choosing to share content on Hashnode's network. I'm excited to see where all this goes.”

Interestingly, some of these investors — Surge, Accel, Naval, Salil, Guillermo — were also a significant part of the startup’s previous round.

Launched in June 2020 by Fazle Rahman and Sandeep Panda, Hashnode﻿ helps software developers, techies, data scientists, and any tech team start a blog on a custom domain for knowledge sharing in the developer community.

Shekhar Kirani, Partner at Accel, told YourStory, that the Accel team realised that there was no good friendly high-quality community for tech people. “Technology changes rapidly and there simply wasn’t any single place for people to learn and connect on a regular basis. Today, every company is becoming more digital. Every sector has a tech play, and software is at the heart of everything.”

He added there are at least 25 million software developers worldwide, who control “everything that humanity does”. Hashnode has a huge market opportunity to help plug knowledge gaps in the community, which is particularly important as remote working gains even more popularity.

“Both Sandeep and Fazle are strong product people and engineers, who understand the needs and the requirements of the community,” he said.

According to Shekhar, the startup is growing 13X in terms of end-user growth. And more importantly, the product is evolving.

Furthermore, Hashnode gives the rights of the content to the people writing it, and this ownership factor is a significant attraction for the developer community.

“Even months before the official launch, we had been interacting with the founders through the iteration and different stages of the product. They have built a strong community, and these aren’t built overnight. The founders are product-first and have hired a team that is global in nature. And you see that even in the investors they attract — these are the people who use the product,” he added.

Another Silicon Valley investor, Salil Deshpande, Founder of Bain-backed Uncorrelated Ventures, said, "Hashnode is fast, beautiful, and stands on the shoulders of giants, that is, it takes the best ideas from prior-generation publishing platforms such as Medium and others while avoiding the awkwardness or intrusion caused by the limitations of their technology or business models.”

He added "Hashnode is growing fast, and is seeing great adoption worldwide. Their ultimate vision for changing the way developers share knowledge strongly resonates with me."

Salil coded the earliest iterations of the Seeking Alpha platform, and was the CEO of TheServerSide network of developer community sites.

In an earlier conversation with YourStory, Naval had said that Hashnode brings the “best of both worlds” — it helps writers focus on writing, as well as gives them the freedom to blog without the risk of losing their content or SEO benefits.

He said, "I seek out delightful products, and Hashnode qualifies — it's fast, it's beautiful, and it's useful.”

According to him, the platform’s USP lies in the fact that developers can start a blog on a custom domain. Additionally, the platform has developer-oriented features like markdown, embedding, and syntax highlighting.

However, Hashnode is a fully-optimised Next.js powered platform served via Vercel. It also has a one-click import from Medium/WordPress and other popular blogging tools and platforms.

According to founder Fazle, “Publishing networks like Medium help a blogger with social media reach and credibility at the cost of SEO, traffic, and customisation. On the other hand, there are self-hosted solutions like WordPress/Ghost who lack an active community.”

The startup is now considering enterprises as a significant buyer, and is looking at a B2B model. Shekhar added that Hashnode’s community-first approach makes it a better product for enterprises.

“We are now evolving into the biggest tech blogging platform, with renewed interest from ML, Data Scientists — not just software developers but the tech ecosystem. All businesses today have tech blogs and they need something that is simple for all developers to use. In that sense, Hashnode is an easy fit,” signed off Fazle.